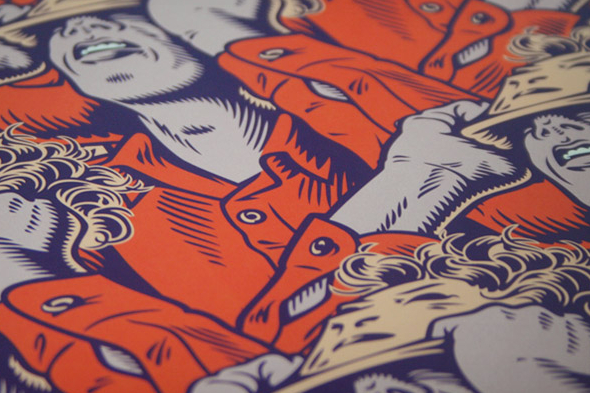 It’s common knowledge that record labels parsimoniously wind back the floodgates during the weeks in August and this is reflected in a limited selection of standout record sleeves this month.

This column has been somewhat lacking in intricately designed lithograph sleeves so far this year, so it’s good to see Bill Kouligas put his Michael Eavis-style festival aspirations to one side and return to the business of releasing lovingly crafted records. The Rashad Backer, Black Sites and Concrete Fence releases issued by PAN in August were all complemented by the visual intricacies we’ve come to expect from the label with the two 12″s in particular standing out.

One label with plenty of coverage in the monthly Best Record Sleeve round up is Will Bankhead’s labour of love The Trilogy Tapes, and their ninth 12″ release of an increasingly collectable discography once again matched eye catching design with peerless sonic curation. The cover art for Lowjit Vagrants from Philitronics duo_moonraker saw Bankhead adopt a topographical approach with an unidentifiable map for the cover (we did the research) complemented by an embossed _moonraker logo on the back.

Johnny Costello’s work for Ali Wells’ clutch of labels has become an increasing presence in this column, and the Birmingham-based designer excelled himself once more with the somewhat alarming monochrome artwork for Spiker, the debut joint release from Truss and Perc. Mark Fell’s induction into Liberation Technologies saw the fledgling label maintain their more impressive new artistic direction after the somewhat rigid nature of their initial releases – Fell’s close associate Rian Treanor responsible for the fabric-mimicking finish on n-Dimensional Analysis.

Redlight Records founder Tako Reyenga was involved in compiling Into The Light, last year’s wondrous and wonderfully presented retrospective of Greek Electronics, and now he’s joined forces with fellow Amsterdam-based diggers Abel Nagenast and Jamie Tiller to form Music From Memory, a label with equal levels of commitment when it comes to attention to detail. The focus of their first release fell squarely on Leon Lowman, a Rhode Island resident who put out a series of private press releases detailing his romantic exploits to a musical backdrop of lo-fi beach funk and lazy synth jams. The languid nature of the music on Liquid Diamonds is complemented by David McFarline’s artwork which does a perfect job of visualising the title.

Some records last month took the one element and applied it in an effective manner; on the deluxe edition of Moderat’s second album, the distinctive illustrated masked figure was repeated to infinity by Moritz ‘Siriusmo’ Friedrich with memorable results. Jamie Hines patterned work on Masculinity Is A Wonderful Thing, Wanda Group’s recent LP for Where To Now? was simpler in comparison but the end results were just as impressive.

The magnificent Donato Dozzy Plays Bee Mask LP was issued by Spectrum Spools last month, arriving with the sort of artwork that was distinctive and memorable even though it really shouldn’t be. Quite where the idea of a close up shot of half eaten seafood obscured by a lime came from is unclear – the LP offers no credit though Spectrum Spools have confirmed it’s the work of Bee Mask himself – but the execution is sublime and helps to form the opinion the album will remain long in our memories.