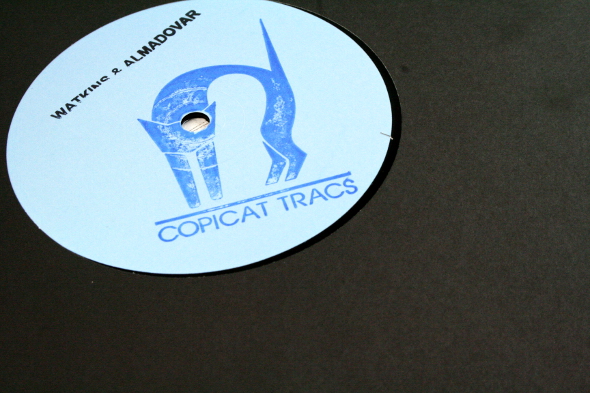 The enigmatic duo known as Watkins & Almadovar emerged out of the swampy ether earlier this year, capturing the attention of well trained ears (such as this writer’s own) with their debut release Copicat Tracs Vol. 1. Accompanied by a complete paucity of information as to their origin, this two track 12” teetered unsteadily between primitive forms of techno and frazzled experimental sonics, and whilst there is plenty of this type of music around at the moment, Watkins & Almadovar retain their own indistinct qualities which had this writer drawing for the record again and again.

Brandishing a name and label that quite possibly references a series of tape echo units originating in 1950s Britain could lead you to believe that this is a pair of established producers operating under the cloak of nerdish pseudonyms, but idle speculation tends to distract you from the force of the music in front of you. Watkins & Almadovar appear even more devilish on the newly released Copicat Tracs Vol. 2, their decision to name each track “Darvaza” in honour of the gas field in Turkmenistan referred to as the “Door of Hell” adding that extra hint of dystopian menace to the already swelling soup of sonic disarray.

Powered forward by thrusting drums moulded from the decaying DNA of early Chicago jack and forgotten Skinny Puppy B Sides, “Darvaza 1” is immediately more rhythmically driven than the two ‘tracs’ on Watkins & Almadovar’s debut, and you could argue it sees the pairing at their most eminently danceable were it not for the nightmarish sounds that unfold immediately around them. Sounding like Frak have back tracked on a deal with the devil and are paying the consequences, harsh synth noises groan with mechanical pain in a manner reminiscent of Chewbacca whilst the cruddy low end swells to the point at which your synapses can take no more.

Much like the A Side, “Darvaza 2” sees our protagonists reaching deeper into the realm of malfunctioning rhythmics – it’s house music but on their own nightmarish terms. The singular quavering modular tone that opens the track hints that Watkins & Almadovar are in no mood to allow you an easy escape back through that ‘door to hell’, and true to form what unfolds over the knackered house beat is as viscerally gratifying as Hieroglyphic Being’s Morphine release from late last year. The final “Darvaza” feels closest in spirit to the debut Copicat Tracs release to begin with, as a slowed-down acid throb sucks the atmosphere out of the channels like a particularly greedy black hole, yet a faltering 808 pattern gives the track a semblance of balance and leads us deeper into the hellish abyss.