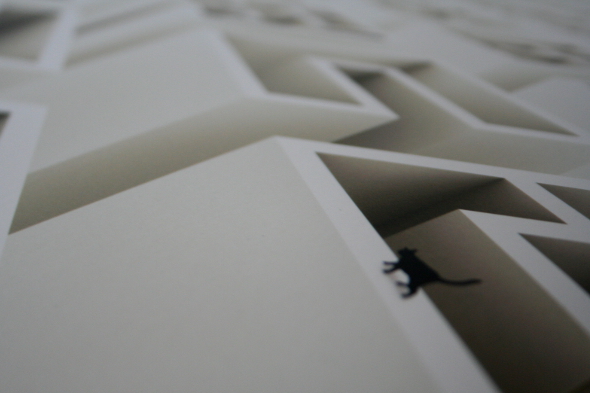 Three years ago, whilst on the promotion trail for her debut album Contact, Love, Want, Have, Ikonika told Pitchfork: “I don’t really know how to play keys… I just smack them until something nice comes out.” At the time, that encapsulated her music neatly; a raw collision of skweee, chiptune, wonky and UK funky that stood out against po-faced dubstep. Tracks like “Idiot” and “Psoriasis” sounded cheap, but they were raucously fun, the sound of someone bashing a keyboard with an enormous grin on their face.

But after a flurry of releases in 2010 Ikonika went silent, having fallen out of love with the rhythms of funky and the day-glo synths of chiptune. She got into classic house and techno and learnt how to use her newly purchased hardware. For fans of that anything goes inventiveness, this was concerning news. But though Ikonika’s latest album Aerotropolis is undeniably a more sedate, introspective and considered affair than those freewheeling early releases, weirdness still lurks beneath the sheen.

Take the frenzied “Manchego”, where basses clunk grittily beneath chirruping synths, which whirl through melody after melody as though the producer, real name Sara Abdel-Hamid, is too indecisive to choose one, cramming a thousand ideas into three-and-a-half minutes. Or there’s the wonderfully named “Mr Cake”, with a low-end as supple and shiny as a foil-wrapped python, which recalls an effervescent Space Dimension Controller, and the machine-funk of Herbie Hancock.

But these moments are comparatively rare, and Aerotropolis’ overarching mood is more pensive, whether in the drum rolls and synths sweeps of “Let a Smile Be (Y)our Umbrella”, which lays warped pads over a fractured beat that finally snaps into a house stomp, or closer “Zen Sizzle”, its occasional kicks offering more decoration than rhythm. Abdel-Hamid even tackles the languid pulse of house, proving herself to be equally adept on the 40-second sketch “Practice Beats”, whose spiralling arps could have been plucked from an Emperor Machine record, before they segue into lush, terrace-ready chords on “Eternal Mode”.

It would have been easy for Ikonika, in her quest for a more mature and developed sound, to wholly abandon the spark that made her first releases so intriguing. But despite different sounds, different rhythms and a different atmosphere, Aerotropolis still feels a natural successor to Contact, Love, Want, Have. To put in terms of Theseus’ Paradox, Ikonika’s changed the axe-head, and the axe-handle, and yet you’d never accuse her of wielding a new axe.