Joey Anderson – Above the Cherry Moon 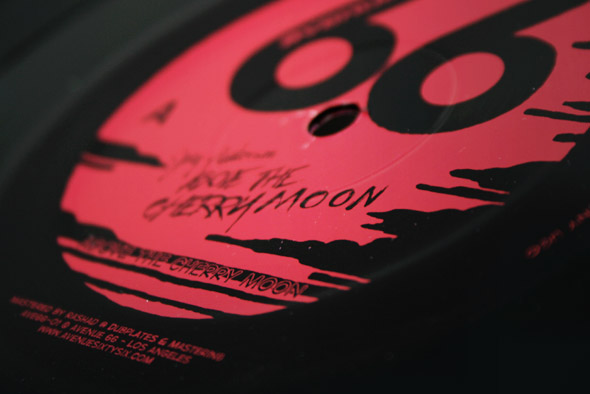 Joey Anderson is the latest producer to confirm New York’s resurgence as a dance music hub. Like Levon Vincent, DJ Qu and Fred P, Anderson does not conform to the city’s traditional house tropes, avoiding diva garage and far removed from the dense tribal house marathons of a Danny Tenaglia DJ set.

The contemporary producer Anderson is closest to is Levon Vincent and while the Novel Sound owner is more dance floor focused, both artists bring a deeply musical sensibility to electronic music. In Anderson’s case, the approach is more abstract and this latest release has as much in common with soul or jazz as house music and feels like an appropriate 12” to inaugurate Absurd Recordings’ dedicated “left of centre” sub label.

The title track begins with a sad vocal and then progresses to reveal a wailing female voice and a more ponderous male vocal, both intoning the track’s title. These elements are so engaging that the dark acid line and spaced out claps, elements that propel the arrangement to the dance floor, are only audible with repeated listens and seem like an afterthought. Avenue 66 has chosen the remixer well and Vakula’s take of “Above The Cherry Moon” is just as out there. Consisting of cosmic chords and keys, its textured sounds are in contrast to Anderson’s pared back original, and due to Vakula’s approach, the vocals are squashed, mashed together until it sounds like they are singing ‘above the chain’ in unison.

Anderson isn’t afraid of venturing onto the dance floor and “Auset M” shows that he is adept at creating grooves that stand out. Built on clipped drums, the arrangement progresses to reveal tougher beats, percussion that sounds like a spoon tinkling about in a tea cup and a wall of dubby interference. Just as the arrangement threatens to veer into bombastic, Anderson cuts everything away apart from the underlying groove, and drops in a sequence of jazzy keys. This whole release is so fluid and loose that, in the words of an Anderson fan on Discogs, ‘you would have to invent a new genre to describe the style’. Listening to Above The Cherry Moon, it’s hard to disagree with this assessment.