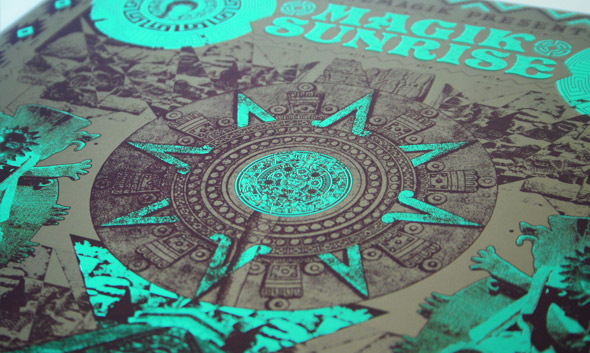 Magik Sunrise sees Psychemagik return to the Leng label run by Paul ‘Mudd’ Murphy and Simon Purnell following the widely successful Magik Cyrkles compilation from last year. While Psychemagik were already well known within certain disco edit buying circles, it’s fair to say that Magik Cyrkles was the record that opened them to a wider audience, and the ensuing global success which they have found has brought along a palpable degree of expectation for this next collection. As a result, Psychemagik have dug deeper and gone for the rarer and more obscure selections; however this isn’t done at the expense of the flow of what is a surprisingly varied narrative of warm and optimistic music which hails predominantly from a bygone era.

The collection begins with a suitably spaced-out cosmic discussion over the ambient work of Iasos with “Formentera Sunset Clouds”, before the beats begin with Daniel Mathieu, who comes across like a Gallic David Crosby on his song “C’ Etait Un Beau Dimanche”. After that we are greeted with Noosha Fox of “S S S Single Bed” fame, who treats us to an altogether less whimsical slice of percussive Balearica with her song “The Juggler”.

The sounds then move to more easterly locales, with the soft, longing, ghetto soul of Walter Hawkins “Metropolis” , before relocating to what could easily be Ipanema, with the beachy Bossa Nova leanings of Steve & Teresa, on their duet “Catching a Wave”. After this, gears change and we’re greeted with the driving Americana of Cherubin, then the deeper Gainsbourg-esque picking of Yves Simon, before the language changes from French to Spanish on the Balearic-Pop-Boogie hybrid “Gózame Ya!” by the controversial Spanish artist, Susana Estrada.

The funk continues through to “The One You Love” with Joey Newman swinging between the vocal delivery of Arthur Russell and Chris Isaak, if either of them were guesting on one of Talking Heads’ more crowd pleasing moments. We then find ourselves with the smooth, modern jazz of Rob Mehl, which leads to the even jazzier territory of instrumentals by George Oban, Rioland & Goldfeder and the afro fusion of Jeff Liberman.

The vocals make a brief return on the synth laden slow jam of David Astri’s “Safe and Sound”, but then give way to the instrumental version Max Adioa’s “Toubab Bile”, which is best described as synthesized afro reggae. This represents a satisfying conclusion to what has been a twisting and turning hour of disparate sounds, albeit music which possesses a collective common thread of the sunny hope for a better tomorrow that one might associate with the titular sunrise they all evoke.