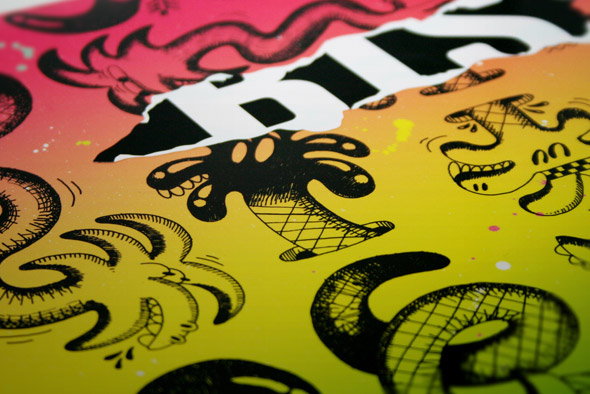 There’s always something rather enjoyable about seeing a producer fulfill their potential, whilst developing their style to take in new sounds, moods and textures. Not everyone achieves this, of course; some are happy to settle into one groove and exploit it, while others just don’t have what it takes to re-cast their music in an interesting new light. Under his Tornado Wallace guise, Melbourne producer Lewie Day has been threatening to deliver great things for some time. His releases have always been solid, but there was always a feeling that there was more to come.

He began, of course, with a series of warm, wide-eyed deep house cuts on Freerange’s disco-centric Delusions of Grandeur offshoot. There was the enveloping, late night hustle of impressive debut “Always Twirling”, the filter-heavy, muted disco shuffle of “Paddlin”, the alien electrofunk/deep house swing of “Insect Overlords”, and the fuzzy, Moroder-influenced darkroom pump of “Underground Sugar Caves”. Slowly, a more Balearic approach began to appear.

“Be My Ladyboy”, from the 2010 Tornado Never Dies EP on Sleazy Beats, indulged his passion for swirling, intoxicating contemporary disco, whilst alluding to the blinking, beffudled charm of an Ibizan morning. Then there was 2011’s “Rainbow Road” on Instruments of Rapture, a baggy chunk of smile-inducing, soul-flecked instrumental deep house that packed in more hazy, sun-flecked synths than your average nu-Balearic jam. This more Balearic approach reached its natural conclusion on Thinking Allowed, his surprise, but no less inspired, debut for Lovefingers’ ESP Institute imprint. All three tracks were unfeasibly picturesque, and lead cut, “Bit 1”, remains one of 2013’s most rush-inducing moments, and arguably his most commanding, confident production yet.

Thinking Allowed showed that his sound palette is changing, but more importantly it displayed a grasp of the intricacies of composition. While “Bit 1” will work on a dancefloor, one suspects it was created just as much to inspire horizontal home listeners as saucer-eyed partygoers. If you can create repetitive, dancefloor-friendly music that works in different environments, you’re on to a winner; in truth, very few producers consistently hit the spot in this regard. >Given the quality of Thinking Allowed, it’s fair to expect great things from Desperate Pleasures, his first appearance on Tim Sweeney’s mighty Beats In Space imprint. It too shows clear signs of development, replacing the dreamy, utopian idealism of its most recent predecessor with a sparser palette of intergalactic sounds.

That’s not to say he’s torn up the rulebook. With its hypnotic, picturesque synth melodies and alien electronics “Space Tropics” clearly comes from a similar place to the aforementioned “Bit 1”. Yet its clattering, popping and hissing drum machine rhythms and murky, rumbling chords suggest a new-found love for vintage syntheziers, 1980s European new age music (the melody, in particular, is very Vangelis) and the near endless potential of rusty old bits of kit. Unsurprisingly, it’s pitched perfectly, evoking a kind of delayed melancholy in the listener. However jolly its main melody is, by the time it slips away into the ether you’ll be left misty-eyed and confused.

Wallace excels further on the title track which drops the tempo to emphasize its mournful, atmospheric credentials. By combining a sludgy sequencer chug with sparse electronic beats and densely layered, effects-laden guitars, it has echoes of that other great Beats In Space explorer, Secret Circuit. It sounds like a long-lost alternative rock B-side from the mid ‘80s, made by beard-sporting Europeans with a passion for bad acid, weed and hard liquor. If it had been made 30 years ago, it would now be considered a “long lost Balearic classic”. Either way, it’s pretty darn good.

The dystopian escapism continues on “Okavango Delta”, which weirds things out even further. Each individual element – the wonky percussion, the backwards guitars, the spooky, John Carpenter chords and B-movie sci-fi horror sound effects – sounds like it’s been run through an echo chamber. The resultant soup of sonics is heady, intoxicating…even tropical. If such a genre existed, it would be described as “tropical pagan”. It’s certainly inspired.

Desperate Pleasures is the kind of EP that rewards repeat listens. On first listen, you’ll be impressed; after a few sessions with good headphones (or, even better, a sparkling sound system), you’ll be amazed with its subtlety, depth and invention. Day has not only delivered, but shifted perceptions, too; he’s no longer a maker of cozy deep house, but a leftfield producer with a clear musical vision.