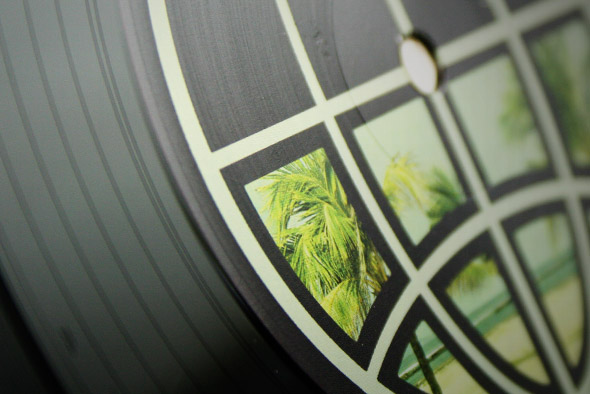 As has probably happened for quite a few artists in the past year or two, when Ruf Dug appeared on Boiler Room back in October last year most viewers were probably scratching their heads as to where the be-capped chap rocking out in a South London living room had come from. His selections were impeccable, his cuts sure of themselves, running the gamut between modern beats and vintage boogie without losing a sense of cohesion and feel-good flair.

Dig a bit deeper and you’ll find out the man has been plying his trade for many years as a selector, with cheeky edits and productions emerging since 2009 largely on his own Ruf Kutz imprint. Now though, the recently reanimated Süd Electronic have commissioned this four track EP of diverse styles, clearly setting their own new boundaries far and wide beyond their minimal techno roots, and equally providing a platform for a few more people to get wise to what this hitherto unknown quantity is all about.

The vibe on “Scrolltext” is instantly in line with that aforementioned Boiler Room set, stepping righteously forth on a brisk disco box-beat, while chunky Moog-ish bass anchors the groove, steeped in boogie without aping it at any point. It’s a heavy hitter, bringing simple repeating elements in and out of the mix without any concern for flashy transitions and not needing them anyway. From the lead piano stabs and background strings to the extra cowbell and occasional flurries of pitched congas, everything is as straight-up as you want it for a no-nonsense party jam.

“Ruffy and Kotterz” is a more overt tribute to 80s funk in all its sleaze and splendour, mostly through the raw live bass. The pads have that woozy Dam Funk air to them, although the track overall stays more direct than the cosmic pathways of the West coast producer, even in the wig-out breakdown of freehand synth stabbing. Once the flipside kicks off with “Piranha” it’s a whole different kettle of fish though, heading directly into a more modern mentality with the broken house propulsion of the beat egging the synths into more urgent refrains compared to the laconic ease of the A side.

Building up rich swathes of melody to an inevitable crescendo, it’s hard to know where the track could be heading and the drop comes in with a satisfying amount of surprise, switching to a moodier bass riff and some excellent, side-swiping snare hits. The roaming spirit of techno certainly inhabits the track, just as much as the sound palette screams house music, but really it’s just a neat intersection of the two (note: not to be confused with tech-house).

Keeping up the more overt dancefloor machinations, “Coliseum” keeps on a more decidedly house tip with a straight up jack beat and warm stabbing riffs building into peaks and troughs with all the right moves for a maximal dancefloor response. In truth, these moves feel a touch obvious compared to the more curious strains to be found on “Piranha” and the rest of the EP, although that’s not to say that the track is weak by any means. If anything, “Coliseum” sums up the spirit of Ruf Dug’s approach on this EP neatly. Rather than trying to be singular or unique in any way, the feeling is that all of the best bits of his favourite records have been distilled into the music he comes out with. Instead of stressing and fussing about reinventing the wheel, Ruf Dug has simply thrown down some pure pleasure tracks that ooze good vibes at every turn, and sometimes that’s all you need from a record.