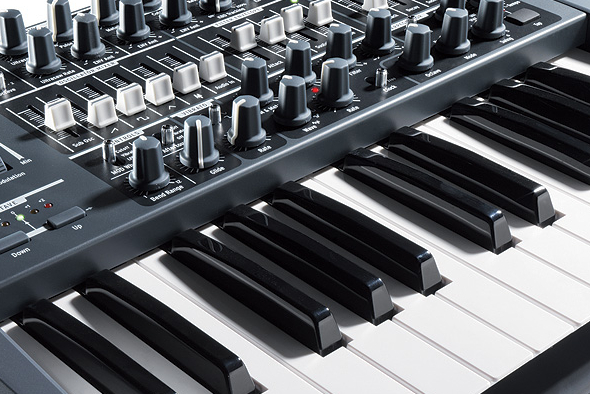 Rob Lee discovers whether Arturia’s virtual dreams have come true with the birth of their first 100% analogue synthesizer.

For a brand that is synonymous with the design of software synthesizer plug ins, it comes as a pleasant surprise that Arturia have the confidence and vision to both design and release a real monophonic analogue synth, especially as the type of soft synths they are most famous for are recreations of well loved classics such as the Moog Modular, Arp 2600 and Prophet V. Although they released the Origin, a dedicated DSP synth which took the guts of their analogue soft synth recreations and placed them inside a lovingly designed modular unit, this new enterprise is quite a departure for the French company. In order to bring their first analogue monosynth into reality they procured the help of vintage analogue synth designers from France, USA, Germany and Japan, along with their own in-house know how, and the resulting MiniBrute is pleasantly surprising to say the least.

The MiniBrute is a single oscillator, monophonic synth (meaning it plays only one note at a time) with a 25 note keyboard and all the controls you would expect from an analogue synthesizer, housed in a tough rubber coated aluminium shell whose broad shoulders and square case and flat keyboard make it ideal for placing in a case and taking on the road. The heart of the MiniBrute is its sound source, which is comprised of a single oscillator linked to a wave mixer that allows you to simultaneously mix sawtooth, triangle, square & white noise wave forms with an external audio source and sub, switchable between sine and square wave, with the useful option of placing it one or two octaves below the oscillator pitch, using sliding faders for precise blending. 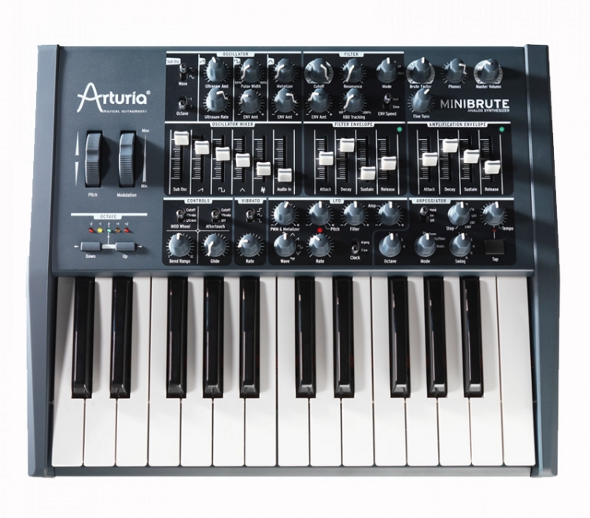 It’s a pleasant surprise to be able to mix all the wave forms at the same time, but it’s not the only surprising element to the sound source, as each of the main wave elements has its very own wave shaping control. For example, the sawtooth has the ultrasaw knob that makes your single wave form sound like an ensemble of slightly out of tune sawtooths, capable of making a subtle undulating movement that you would usually associate with synths containing multiple oscillators. The square wave has a pulse width modulation that can be modulated by the envelope and LFO, and finally, the triangle has what’s been christened the “metalizer”. Despite the kind of name that would offend analogue-only acolytes, the metalizer is actually fairly unique, adding overtones and harmonics to the waveform that creates a glistening, crystal-like tone to a more rugged growl; it creates sounds that you could mistake for the sort of edgy sounds found in additive synthesis, and once again this can be modulated by the envelope and LFO, or by using the amplitude envelope ADSR sliding faders found to the far right.

The multi-mode filter has been created with the help of Nyle Steiner, who developed the highly regarded Steiner-Parker filter that was found on the only serious contender for Moog, the Synthacon. The original filter was also a multi-mode, two pole, design and this new version includes the expected low pass filter along with high pass, band pass and notch, with keyboard tracking up to 200% and a useful envelope speed switch, which when put in fast mode helps you create snappy, squelchy bass sounds. Flip the switch into slow mode and you can create more languid and gentle filter sweeps associated with leads or atmospheric sounds, and again the envelope of the filter can be controlled by the dedicated ADSR sliding faders. In addition there is a comprehensive LFO for modulating your sound by a choice of sine, saw, ramp, square, random square and random sine waves.

“Arturia should be commended for beating the odds and coming up with a monophonic, analogue synth with a single oscillator that is both robustly built, affordable and has all the connection possibilities you could hope for.”

The modulation rate can be synced to the built-in arpeggiator or can be completely independent, and the choices of modulation include pulse width modulation and metalizer, pitch, filter and amplitude, all of which can be implemented at once and adjusted individually; on reflection it is safe to say that, for a synth in this class, modulation doesn’t get more comprehensive. The on board arpeggiator services up, down, up/down and random patterns between a user selectable one to four octaves, with an on/off and hold switch that leaves two hands free to tweak the living daylights out of your arpeggiated pattern. The tempo of the arpeggiator can be set using either a free tempo knob, tap tempo or can clocked externally via the USB or MIDI in ports, making it great for use in a studio set up with your DAW of choice. Further to this, you can select the meter of your arpeggio between ¼ notes to 1/16 notes with a further ¼ triplet to 1/6 triplet.

Turn the MiniBrute around and you are presented with a bounty of connection options with MIDI in and out and USB connectivity giving you the option to make the MiniBrute your keyboard controller if you so desire. There are audio input, audio output and headphone output ports using 1/4” TRS sockets flanked by a standard 12V DC power housing that is in need of some kind of retainer so that it doesn’t get damaged. If you are looking to add the MiniBrute into a set up with vintage gear or even new modular gear, there is a full compliment of CV/gate ports including pitch out, gate in and out, amp to VCO, filter to VCF and pitch to VCO. For those that are wondering, you can also use this synth as a MIDI to CV converter.

In addition to the main features of this powerful monosynth, the MiniBrute also has a gate selection switch on the rear that allows you to change between keyboard, hold or audio trigger. It has aftertouch control that allows you to bring in vibrato or affect the cut off filter, simply by adding pressure to the keys. There are also small but workable pitch bend and modulation wheels with variable pitch amount between plus or minus one octave. The octave selection buttons allow you to operate between plus or minus two octaves. The master volume is flanked by a completely independent headphone volume control that could help smooth the patch change procedure in between songs in a live situation and if you are in a DJ/PA situation, there is a fine tune knob that will change the pitch by small increments up to plus or minus a whole tone, to ease discrepancies with tuning when the DJ pitches songs up or down. Lastly there is a control known as the “Brute Factor”, which, despite the terrible name actually adds a kind of feedback loop that can help tip your clean sounds into the realm of completely out of control; if you are in need of a quick edgy dose then this grungy distortion could be your first port of call.

Those looking for the presets cursor will be disappointed, as there are no pre-set patches on this machine. Like other recent analogue offerings from Korg and Moog, this may put off those with a limited knowledge of synthesis, but will be attractive to those who don’t mind getting their hands dirty with such things. If you do need to record patches for any number of reasons then Arturia have included a set of ten blank transparent overlays for you to mark parameter settings on. There are some prepared overlays that will help you create various pre-set patches, and these are particularly useful for those that are new to analogue synthesis. There have been murmurings about an iPad app that allows owners to share their patch creations but so far it has proved elusive.

The MiniBrute does suffer from having slightly spongy keys that feel like they may snap off if you put a little too much pressure on the ends of them. It’s perfectly adequate for sound designers that just a need a few keys to trigger sound effects, or for recording basslines, hooks and arpeggios, but for the old school user that likes to solo, this limited 25 note keyboard won’t really suffice. Obviously it’s not the end of the world as most people have a favourite controller anyway and with the USB and MIDI connectivity found here, no one is going to have a problem hooking up a more substantial keyboard. Also, being a single oscillator machine it’s not possible to detune elements separately from one another, so don’t expect to be able to create fat fifths or edgy electro detuned bass sounds.

The MiniBrute is fairly unique in its seemingly endless set of features, and if it could be compared to anything comparison, then it would be a cross between an SH101 and a Moog on steroids with a hefty dose of attitude. People may prefer the powerful and slightly more expensive Mopho from Dave Smith Instruments, but it doesn’t have the “one control for one function” layout of the MiniBrute. In fact it’s easier to compare it to machines with multiple oscillators such as the Korg MS-20 mini or the Moog Sub Phatty than it is to find a synth with a single oscillator that even comes close in terms of sound, controllability and build quality. Overall, this synth has got its back legs shamelessly fixed in the past whilst reaching forward into a new and creative tomorrow, and Arturia should be commended for beating the odds and coming up with a monophonic, analogue synth with a single oscillator that is both robustly built, affordable and has all the connection possibilities you could hope for.