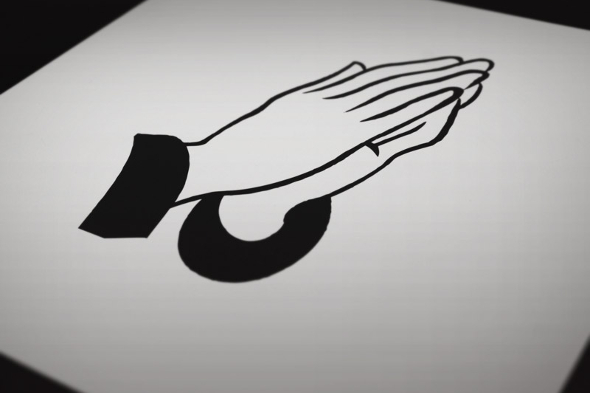 Young Turks, Public Information, Créme Organization and Antinote feature amongst a baker’s dozen of record sleeves from May.

The Redeemer, Dean Blunt’s new album for Hippos In Tanks, brandished the sort of simple yet iconic cover art that you feel will remain instantly recognisable years into the future. Given Blunt’s diversionary tactics when it comes to artwork in the past – professional lad Danny Dyer is credited with the cover art for last year’s Hype Williams LP Black Is Beautiful for example – it’s unsurprising that there is no information regarding the artist responsibe for the illustrated clasped hands.

At the opposite end of the spectrum were the Koreless and Ste Spandex twelves issued by Young Turks and Red Laser respectively. The former label have a well established reputation for housing their intermittent releases in luxuriant sleeves, and their ongoing aesthetic efforts were in part the reason for us deciding to do this detailed monthly rundown. Whilst not as visually elaborate as some of the label’s previous releases, the Yugen EP from Koreless still belongs amongst Young Turks’ best sleeves to date thanks to Drew Heffron’s warm neon treatment, which is wholly evocative of the music within. By comparison Mancunian label Red Laser have less of a reputation to lean on, but the colourful explosion of 8-bit graphics that adorned Spandex’s recent record (his own handiwork no less) demonstrate this is a label with the right intentions.

Public Information, Créme Organization and Antinote are three labels whose work has already featured prominently in this column so it makes for little surprise that their latest respective releases made a suitable impression on us. Interpretations On F​.​C. Judd from Public Information called on the well respected design talents of Optigram’s Manny Zambrano, a key visual artist for Hyperdub as well as label boss of Citinite. Mehdi Rouchiche should perhaps receive an honourary award for helping to establish a distinct visual theme for Créme Organization through his many illustrated sleeve designs, with the amusing cover for Neville Watson’s recent album up their with his best. The design work of Check Morris’s Nicolas Motte and the silk screening skills of Valentin Bouré once again ensured that IUEKE’s latest Antinote release remained as visually memorable as it did sonically.

There seems to be a shift in techno away from the hand stamped white label culture towards something a bit more bespoke and sleek, with Avian pioneering the PVC sleeve and card insert blend that’s been adopted by more labels. Both the latest Inner Surface Music and Get The Curse releases and the debut Perc Trax Ltd 12″ were the most impressive examples of this approach in May. The debut ‘issue’ from Jealous God, the new label from Regis, Ruskin and Silent Servant took this a step further with the latter seemingly given carte blanche to indulge his design desires.

If you spent some time with our recent label feature on Giegling, you”ll understand how much consideration Konstantin and DJ Dustin put into the design and presentation for each and every one of their releases to date. This much was evident in the cover art for Dwig’s new album Forget The Pink Elephant, with one of the label’s creative forces Schaaly making full usage of a cover photo supplied by M. Völker. Similar printed sleeve methods were applied on Jaipur Palace, Nick Mackrory and Phil Banks’ debut release together on the new Forgotten Corner label, whilst another new operation, Montreal’s Forbidden Planet, opted for the Preserved Insticts approach on their first transmission with a white matte sleeve lent a degree of weirdness by the Dali-esque ink print.