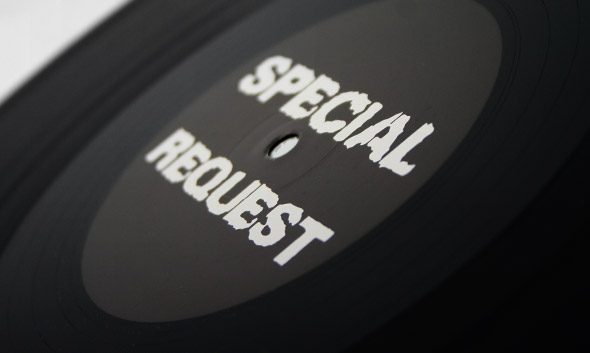 When Paul Woolford’s Special Request project first appeared last year on a pair of hand stamped white labels, it only served to demonstrate how neutered the majority of modern bass music had become. Making an effortless move from techno to a hybrid of 4/4 and jungle, he drew inspiration from the music heard on pirate radio stations during his youth; although by no means the only producer doing this kind of thing right now – see also Pangaea, Pearson Sound, Beneath and Tessela – Woolford’s productions have more of a throwback feel to them which somehow make them feel genuinely like lost artifacts of the ’90s.

Anyone who has heard the punishing bass landslide at the heart of “Lolita (Warehouse Mix)” will know that Woolford doesn’t do things by halves in these records, and his fourth Special Request 12″ is no different. Although the deep chord stabs of “Vapour” initially give off the impression of being a more sedate trip, its hollow kicks soon drop with the weight of a Kassem Mosse production, sending out waves of pressure that Woolford filters in and out at regular intervals. It’s the most explicit techno track Woolford’s done under this guise, but the swirl of dubby chords, and sub-fuelled breakdown at the mid point give it just enough of the hardcore continuum’s energy to stop it wandering into tepid tech house territory.

Really though, this 12” is all about the appropriately named “Mindwash”. The Special Request material is always at its best when Woolford goes all out hardcore, and this track is a case in point; an Amen break is paired by a gnarled synth arpeggio filtered to within an inch of its life, whilst the sound of a spacecraft’s landing bay doors closing go off in the background. It’s ridiculous, but in the same way that The Prodigy’s “Out Of Space” is defined by its more comical elements, it works.

It’s even more surprising when Woolford seems to bolt another completely different track on at the climax, throwing in some wide-eyed 5am chords and a vocal breakdown, but it perfectly encapsulates that feeling of drifting between FM frequencies that the Special Request material often delivers. The kind of music Woolford references on “Mindwash” has struggled with a lack of ideas and a tide of digitally released sludge for years; it’s a track that proves things could be so much better.