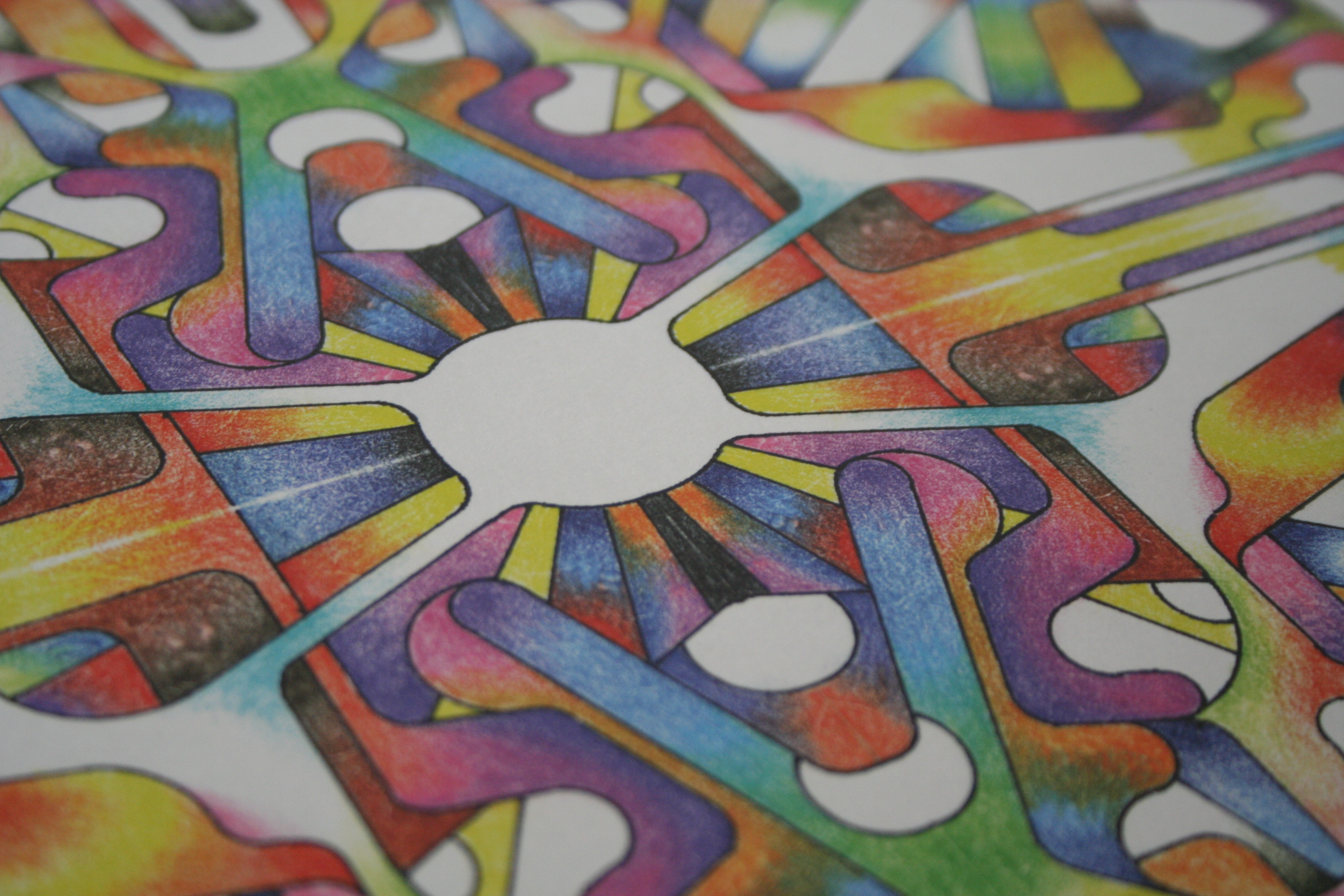 In recent press photos, Eddie Ruscha has looked every bit the West Coast acid casualty that his vivid, kaleidoscopic productions have suggested. Surrounded by his colourful, out-there paintings and dressed head to toe in “tropical psychedelic” clothes – a distinctive concoction of rainbow-coloured scarves, baggy jewellery, strange masks and eye-popping patterned sweaters – he projects himself as the apotheosis of the 21st century digital hippy. Given the hazy look in his eyes, you’d never accuse him of putting it on; clearly, he’s more out-there and artistically inspired than your average electronic producer.

A quick glance at his musical history confirms this. Before pitching up on Tim Sweeney’s Beats in Space label last year with the notably intoxicating blend of space disco sassiness, out-there attitude and acid-flecked electronica of Nebula Sphinx 12”, Ruscha had previously impressed with a series of cassette-only releases that somehow blended disparate inspirations; ambient, dub and tropical rhythms to acid house, Balearica and tactile electronica all melded into a coherent and thrilling musical whole. These releases were later mined for Tropical Psychedelics, the Secret Circuit album released by Emotional Rescue last year.

But that barely scratches the surface of Ruscha’s curious life story; born the son of the acclaimed pop artist Edward Ruscha, his musical career began at the tail end of the 1980s with spells in noise-art and shoegaze bands, including Creation Records signees Medicine (for the record, Ruscha contributed “bass and tape” to their 1992 debut album, Shot Forth Self Living). He later set up a dub collective called Future Pigeon and collaborated with Rub ‘N’ Tug’s Thomas Bullock on the psychedelic rock lunacy that was The Laughing Light of Plenty, who bizarrely featured a certain Harvey Bassett on drum banging duties.

Given this rich and diverse history, it’s perhaps unsurprising that his work as Secret Circuit constantly surprises, thrills and amazes. Tactile Galactics represents a perfect way for Tim Sweeney’s Beats In Space label to step into the album market, with Ruscha delivering a coherent set that’s almost overflowing with weird and wonderful ideas. It’s as fresh as you’d expect, but with a thick vein of musical history running through it, you can hear echoes of 25 years of musical misadventure in every beautifully kaleidoscopic cut.

This is apparent in the driving, building opener “Higher Heights”, with its flowing pianos, analogue electronics and dreamy vocals, or the rush-inducing MDMA blast of “Escargot”. Blending shoegaze vocals with twinkling keys, darting synths, vivacious chords and clattering drum machine rhythms, it bristles with the sort of wide-eyed innocence and touchy-feely warmth that made AR Kane’s I and Primal Scream’s Screamadelica such landmark albums. The late ‘80s/early ‘90s period seems a constant source of inspiration; the beautiful “Sync or Swim”, for example, begins life as a twittering blast of ambient house nostalgia, before exploding into life in the closing moments.

The bubbling “Words In Transit”, which notably features Ruscha’s most prominent vocal to date, sounds like the sort of smiley-era, psychedelic pop that could have made by the Shamen had they not dovetailed into a career of chart bothering rubbish dance-pop. If Colin Angus hadn’t teamed up with Mr C, he may have ended up making music like this – all undulating analogue riffs, tropical drums and saucer-eyed intent. They did, after all, start off as a psychedelic rock band.

Despite these fault lines to the past in Secret Circuit’s DNA, this is not an album that sounds even remotely old-fashioned. It may come from a similar place – certainly, many of the inspirations are similar to those ‘90s electronic pioneers – but Ruscha’s work never sounds anything less than forward thinking. This is most overtly demonstrated on the stargazing psychedelia of previous singles “Nebula Sphinx” and “Afterlife”, where the crashing, delay-laden drums and intoxicating atmospherics hint at his dubwise past. Or, for that matter, the trio of tracks that closes the album, Rogue Unit”, “Exalter” and “Milk”. All three are built around drawn-out, droning synthesizers, heavy rhythms and electronic melodies that seem designed to induce some kind of trance-like state in the listener. “Exalter”, in particular, is so psychedelic that the vinyl version of the album should come bundled with a bumper bag of mushrooms and a few tabs of acid sneakily inserted into the dust jacket.

From start to finish, Tactile Galactics comes on like the perfect musical trip; it’s bold, melodic, hypnotic, beautiful, blissful, intense, inspiring and exciting. There are numerous layers to peel back, curious touches to discover (a disco-flecked clavinet in the middle of a dreamy ambient cut being a memorable example) and surprising twists to enjoy.