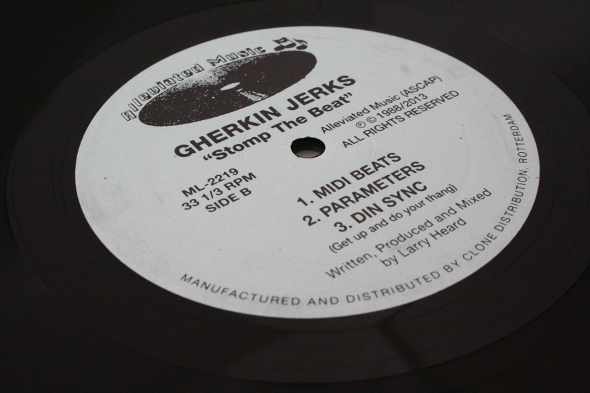 While this writer feels Larry Heard’s output has been hit-and-miss for some time – the superb 2006 cut “The Sun Can’t Compare” being the outstanding ‘hit’ in a relative sea of recent mediocrity – there’s no denying his immense contribution to the history and development of house. Of course, he’s most fondly remembered for his Mr Fingers and Fingers Inc productions, which almost single-handedly developed the blueprint for deep house as we know it today.

Listen back to his landmark 1980s deep house productions – “Can You Feel It”, “A Love Of My Own”, “Mystery of Love” and the sublime “What About This Love”– and they still resonate today. There are few finer examples of deep house in its purist form than those productions, blessed as they are with a spine-tingling mix of rough analogue grooves, inspirational musicality and raw machine soul. Yet for all the smoothness of his most famous productions, Heard was not averse to taking things in weirder and wilder directions. Take his proto-acid cut “Washing Machine”, for example; released in 1986 before the term ‘acid house’ had been coined (Phuture’s “Acid Trax” pre-dates it, but didn’t get a release untol 1987), it still amazes with the raw power of its jackin’ grooves and twisted electronics.

Arguably Heard’s wildest releases, though, were saved for his Gherkin Jerks alias. Amazingly, he only used it twice in the late 80s but those two EPs have gone down in folklore; both Stomp The Beat and 1990 contain some of the roughest, most out-there cuts Heard ever committed to wax. If it’s hypnotic, mind-altering drum machine music you’re after, there are few finer examples around. As a footnote, he hid his identity for years, choosing only to “come clean” about the Gherkin Jerks alias in 2002, when the two EPs were re-released. Despite those reissues, getting hold of copies is still tricky. Original Gherkin Records pressings of Stomp The Beat, for example, still change hands for upwards of £50 online.

It makes perfect sense, then, that Clone has joined forces with Heard’s Alleviated Records imprint to deliver timely remastered reissues of both 12” singles. For those with a penchant for the more leftfield end of Chicago house, Stomp The Beat is a real treasure trove of treats. Opener “Don’t Dis The Beat” features some particularly mind-altering stereo panning. At first, the constant bouncing of the action, filter style, from left to right is a little disconcerting; by the end of four hypnotic minutes, it makes perfect sense. Alongside this “Tar Disc” and vocal cut “Din Sync (Get Up And Do Your Thing)” both fix uneasy, out-of-key melodies – the latter in some kind of odd tribute to West African music – to typically tough 909 grooves. Even more impressive is “Acid Ingestion”, a piercing fusion of thunderous low-end bounce and wild 303 tweakery. There’s one concession to Heard’s usual deep house style – the “Can You Feel It”-esque “Parameters” – but to be honest it gets a little lost amongst all of the inspired madness going on elsewhere.

Written and produced a year later, 1990 feels like a very different beast. While it still bristles with the hustling intensity of its predecessor, it largely sees Heard in techno mode. Not techno as we understand it today, mind, but techno in the original Detroit sense; futurism in its purest form and you get the impression Heard was impressed by the intergalactic sounds emerging from the Motor City. While not as instantly unhinged as the rougher Stomp The Beat, the six tracks on 1990 are just as good. The intergalactic chords, darting synths and sparse drums of “Space Dance” immediately stand out, whilst the hissing cymbals, heavy bass and syncopated handclaps that characterize “Saturn V” makes for sublime, warm techno-funk. “Meltdown”, a rolling slab of pitched-down techno with sharp Detroit synth stabs and nagging, incessant keys, sounds like a rough, “work in progress” version of “Nights of the Jaguar”. The decidedly cosmic “Red Planet”, on the other hand, is just beautiful. Like the rest of Heard’s Gherkin Jerks work, it sounds like it was beamed down from another dimension.