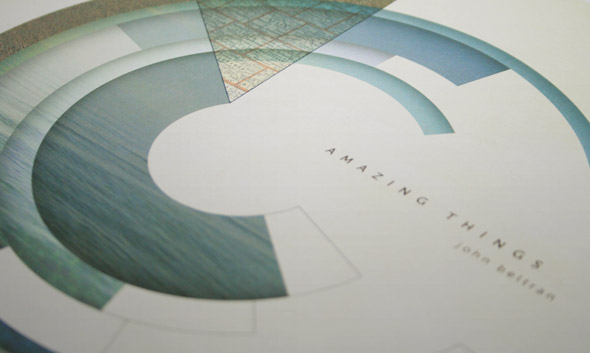 If ever there was an aptly-named album it’s Amazing Things, John Beltran’s ninth album. The Michigan producer has been synonymous with introspective ambient music since the 90s, but Amazing Things sees him embrace a wider palette to create arguably his strongest work to date.

It begins with the half heard vocals and swirling synths of “Retrouvailles”, each element washing over the next gradually, like a warm sea breeze blown in over sunbathers on the strand. It sets the tone for much of the album and is immediately followed by the symphonic strings and gently tumbling beats of “Clouds Pull” and the mournful synths of “Het Leven is Mooi”. Indeed, there is no shortage of melodic moments on Amazing Things and it proves that Beltran is the master of ambient techno.

There are the fragile synth lines of “Amazing Things to Come”, which hang in the air like beadlets of dew dropping onto a spider’s web, the rich strings and jazzy keys of “Esperanto” and the understated, stepping rhythm and back beats underpinning the seductive vocals on “Seasons Go”. At this stage, one would expect such unfussy brilliance from the US producer, but “Amazing Things” also delivers on his ability to branch out. “Broken Mechanism” and “Snow Day” well over with heart-stopping neo-classical piano lines; Beltran steers both arrangements in the right direction, ensuring that they do not become hostages to cheesy new age clichés.

More impressive though are the producer’s experiments with guitar-based compositions. The fuzzy “Inexorably Tied to You” gives us an indication of things to come and the full extent of this fusion is realised on “Flower Power Nuclear Submarine” and “Of All The Things In This World”, where shimmering, glacial swathes of guitar accompany his weeping synths. On “Medellin”, the guitar is jangling, closer to the LAs than My Bloody Valentine, but the end result is the same, music that is so beautiful you will tear your hair out in amazement that no one thought to make it before.

Beltran has two more cards to play: “Second Summer (Version 2)” produces layers of weeping, indie guitar lines, but even this is bettered by “For Vangelis”; the reference to the pioneering producer can be heard in the spacey synths, but the piercing bluesy guitar rivals Ry Cooder’s playing on Paris, Texas. It’s not the kind of accolade that one hands out too readily to an electronic music producer, but then again, this is an amazing thing.