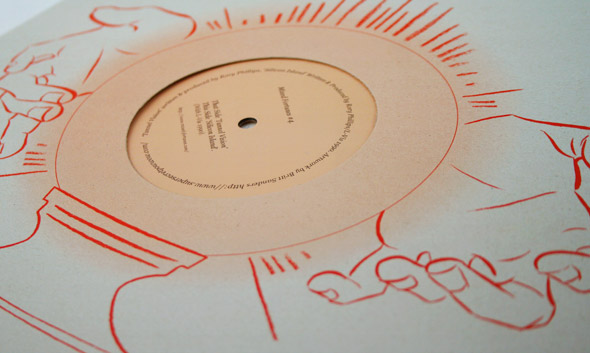 Versatility has always been a look that’s suited Rory Phillips. His extensive remix productions may have been singlehandedly responsible for making late 2000-era British electronic pop music palpable – breathing new life into everyone from The Gossip and Crystal Castles to the Scissor Sisters – and Phillips brought that same eclecticism to now-legendary club nights Trash and Durrr.

More recently however, it seems that Phillips is finding something refreshing about setting limitations. His other London-based club endeavour Say Yes steers away from the large-scale madness of those aforementioned club nights, and channels “the kind of ‘hands-in-the-air’ factor you only get by playing the music you really love in a small room.” Similarly, Phillips’ subscription based Mixed Fortunes label has punctually turned out three instalments of original productions throughout 2012, exploring his knack for punchy vintage synthesizer workouts in an off-the-cuff manner that seems spurred by the desire to work creatively within self-imposed constraints.

Though Phillips has previously stated that he actually finds the production process extremely difficult because of his lack of formal music training, the fourth instalment of the Mixed Fortunes project finds him sound quite comfortable deftly navigating textures and rhythms. A-side “Tunnel Vision” showcases this to a tee, as perhaps Phillips’ most jubilant production yet– an arp-punctuated, rapturous cosmic blitz that merges his passion for Krautrock with club-friendly synth canoodling. While previous Phillips productions like “Chamber Music” and “Mover” seem to prefer electronic-MIDI pads and churning organs, “Tunnel Vision” is all about the weighty, organic piano chords propelling the track, a sped-up house anthem channelling bits of Sparks’ “Tryouts For The Human Race” with perhaps the fastest BPM of all Mixed Fortunes singles yet.

While “Tunnel Vision” whips through its seven-minute duration, it’s the L-Vis 1990 collaboration “Silicon Island” where Phillips really shines. Perhaps this shouldn’t be surprising: Phillips’ work seems most animated and driven when collaboration comes into the fold– consider his partnership with Martin Dubka on the vocoder-tinged boogie track “Don’t Stop” from Mixed Fortunes #3, or any remix work prior to the Mixed Fortune Series. Luckily, Night Slugs co-founder James Connolly is a prime choice for a partner to bounce ideas off; an artist who’s shown a dexterity ranging from revamping old Armand Van Helden tracks, composing soaring pop ballads, and most recently pumping out a skeletal excursion on Jack 4 Daze which showcased four tracks of snarling, functional Chicago jacking house. While “Silicon Island” doesn’t have the menacing synaptic crackle of “That Thunder Track” or the wistful underpinnings of “Lost In Love,” it does find Connolly striking a balance between his styles.

Beginning in a fairly similar vein to other Phillips’ productions, with soaring synths and beefy handclaps, Connolly modulates Phillips’ structure with just enough squiggly distortion to add a sense of propulsive urgency to the endeavour, while still remaining restrained enough to let the track unfurl naturally. Phillips’ affinity for mutant-disco and Connolly’s dexterity at intensifying pop structures shine through. The only disappointment is that at four and a half minutes, it feels as if both artists are in the midst of hitting their strides when the music cuts out.

With two more instalments of Mixed Fortunes remaining before the label “self-destructs,” it’s promising to see Phillips hit his stride production-wise, especially when working within a relatively limited analogue framework. As collaboration has been the catalyst for some of his strongest projects, parties and productions so far, Mixed Fortunes would be wise to keep bringing new partnerships into the fold for the sadly limited time it has left.

A. “Tunnel Vision”
B. “Silicon Island”