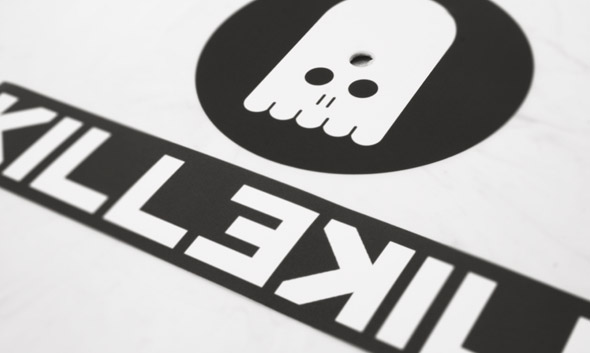 One half of Lakker flies solo with devastating results. When he’s not dropping techno for Blueprint, Killekill and Stroboscopic Artefacts with Dara Smith as Lakker, Ian McDonnell works alone under the name EOMAC.

Truth be told, there’s not a massive difference in approach between the Lakker output and EOMAC’s work. Both projects are inspired by abstract electronics – this writer shudders when he hears the term ‘IDM’ – and dance floor techno, and it’s Lakker and EOMAC’s ability to marry these seemingly incompatible sounds that makes what they do so compelling. It seems to come naturally to McDonnell and Smith to make music that combines these influences and the four tracks on Spoock continue in this vein.

Indeed, the title track is probably the hardest hitting track either producer has done; a slamming, noisy rhythm is at its core, but it’s the screeching, high frequency tones that pirouette incessantly as the track progresses that make it stand out. It sounds like McDonnell has captured a trance melody, ground it down in an iron grip and blown it from his outstretched palm like angel dust over the arrangement. By comparison, the rest of the release sounds relatively sedate.

Lucy delivers a remix that features the same reconstituted riffs, but places them over a droning bass and stepping rhythms, an arrangement that makes his work for Stroboscopic Artefacts appear relatively demure. “Stylised & Desensitised” takes the intensity levels down a few notches, with McDonnell serving up more weird and occasionally disturbing samples, albeit to a more conventional, post-Sandwell tunnelling groove.

Finally, there’s “No Name”, which provides a place for Eomac to arrive at a state that could loosely be described as mellow. The rhythms are shuffling and metallic – think Martyn encased in a titanium shell – and there appears to be a cooing vocal sample making vaguely sexual overtures. What about the trance melodies? This time McDonnell spares them the agony of disembowelment to flirt with his wooden beats. But as anyone who knows Eomac or Lakker will attest to, it will only be a temporary reprieve.