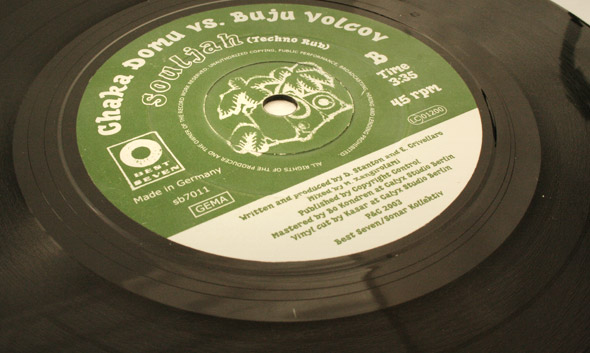 The notion of creative burnout and a sense of no longer knowing your place in an ever-shifting musical landscape after being aligned so closely to any one particular style must be a slightly daunting feeling for producers today. This makes Dominic Stanton’s abrupt decision to retire immediately from the music industry in 2009 quite compelling reading.

Announced in concise, verbose fashion via a carefully worded open letter that referenced the Pacino film Carlito’s Way, Stanton laid out a multitude of reasons for his decision, amidst them the feeling of being over the hill, a jaded individual whose participation in underground music and club culture was no longer required. Elsewhere the struggles of a record industry unprepared to deal with the pervasive power of download culture is mentioned, but what truly struck home was Stanton’s own fears of creative burnout.

Notions of confusion, insecurity, bitterness and depression are supposedly alien to the rock star, cake throwing lifestyle of the type of bloated DJ personality portrayed by some sections of the media. The truth however is that the DJ lifestyle is filled with all these possible pitfalls; even the most successful of DJs would probably admit to periods where all the passion and enjoyment has dissipated, where you’re stuck playing records you’re not sure you like to people who have little idea who you are. The best amongst them lift themselves out of this creative dead end through sheer effort, persistence and talent, but what happens when that fight is no longer there?

In Stanton’s case, he walked away, signing off on ten years worth of DJing and production with immediate effect, dating back from his time as part of 90s drum & bass outfit Solar Circle to a position as one of the lynchpins of broken beat under the universally recognised name Domu. Stanton clearly experienced these doubts creeping in as the wheels of his scene started to flounder around him, and some three years on it’s telling that many others so prominent in the same genre are notable for their absence from contemporary electronic music.

Stanton remains closed to the world that once embraced him, leaving only his vast, diverse and slightly intimidating discography across numerous self styled “production characters” and a reputation as one of broken beat’s most influential producers. It’s an interesting exercise to look back on the work of a producer and join the dots that weren’t fully obvious at a time when Discogs or the internet in general wasn’t the powerful tool it is now. For someone such as this writer whose casual appreciation of Domu’s discography was formed from the odd remix here or a glowing review in Straight No Chaser there, taking the chance to re-evaluate his rich back catalogue uncovers projects of genuine intrigue. Yokota for example; a project Stanton did with Dave Farlan which was centred around a heavily broken slant on techno, releasing material on Delsin Records way back in 2003 – a time when the Dutch label was centred far from this writer’s own radar.

The focus of re-evaluation here falls on Souljah, one of several collaborations done with Neroli label boss Volcov (Enrico Crivellaro) under the Chaka Domu vs Buju Volcov banner. This dinky seven came to fruition back in 2003 as part of the Best Seven sub-label of long running German imprint Sonar Kollektiv. Founded by SK mainstay Daniel W Best in 1999, the label’s musical remit largely riffed off reggae soundsystem culture with mixed results, yet still managed an impressive twenty five releases over its nine year duration.

Souljah is perhaps the perfect subject for Dusted Down; the ready availability of this 7″ on Discogs for the price of an MP3 seems as puzzling as the fact it has remained elusive from the grips of hungry YouTube uploaders. The “Dancehall Rub” version of Souljah stands out as the highlight, sounding remarkably relevant today nearly a decade after release; to these ears, the brutish concoction of broken rhythms and viper like sub bass feel remarkably similar to the kind of music currently favoured by the likes of Kowton, Pearson Sound, Kahn et al. Brushed with junglist bleeps and gunshots, the A-Side version swaggers with that elusive element of ‘rudeness’ which was absent from the politer, jazz-indebted end of the broken beat spectrum at the time, and indeed is lacking in some of the diluted productions of today.

This feeling is heightened by the duo’s incendiary usage of David Rodigan’s highly distinctive microphone hyping, something that this writer retroactively discovered, having not been really aware of the DJ’s high standing within UK Dancehall culture at the time of purchase some nine years ago. Listening back now, it feels like a welcome nod to Rodigan’s tireless endeavours at a time when he didn’t enjoy the sort of widespread love he does today.

The accompanying “Techno Rub” begins in a similar fashion to the A-Side, but Stanton and Crivellaro gradually implement a rising tide of synth lines straight out of the hi-tech soul school of thinking; but at 3.35 minutes long, they don’t have the time to implement it in a manner that matches the impact of the “Dancehall Version”. This represents one hindrance offered by the restrictions of the format – the other being how difficult it is to mix with 7″s – and both make you crave the extended edit that never appeared.