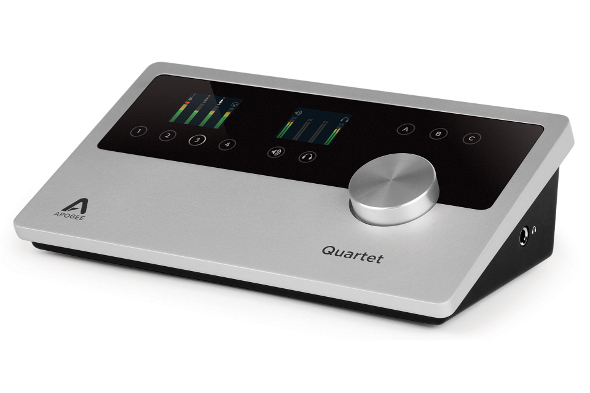 Santa Monica based Apogee have been in business since 1985; possibly one of the few music technology companies to have been founded by a woman, they are nevertheless best known for their USB 2.0 Duet soundcard. The Duet recently had an overhaul, featuring a port for a breakout box to help keep cabling neat and tidy along with improved latency, OLED display, assignable touch pads in addition to the extra outputs. However, this compact unit might not have all the inputs and outputs a producer running a medium sized home studio might need, which is why Apogee have opted to expand on the unit with the new Quartet. Featuring four inputs and eight outputs, the Quartet bridges the gap between what is possible on the basic Duet and the more advanced Ensemble unit which features 36 channels of continuous audio in a single rack mounted unit.

Demure but decidedly solid, the Quartet is designed to sit on your desktop and be quickly and easily accessible for all kinds of work involving digital audio. It has an ergonomically designed sloping face with a single large push encoder to help you dial in the required gain or volume. This time around there is separate control over the main outputs as well as the headphone output, which is especially handy for artists who engineer their own sessions. Pushing down on the encoder mutes the selected parameter and by using the assignable pads you can clear the metering, dip the volume or sum the stereo mix to mono. All of these functions are very handy tools for those that spend extended periods of time mixing. However, if you prefer, you can re-assign the three touch pads via Apogee’s Maestro 2 software so that they control switching between different speaker pairs or monitors. 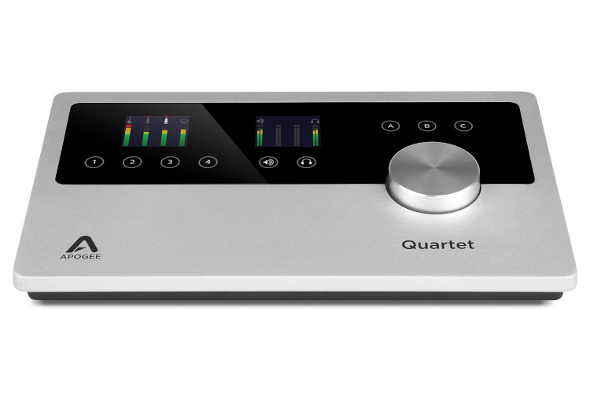 The Maestro 2 software is available to download from Apogee’s website and is designed to be a software interface for Apogee’s physical unit, but it’s not just for control over the outputs. The Quartet has four inputs, as the name would suggest, and controlling the input volume of the microphone pre-amps is as simple and intuitive as it is for the outputs. Effectively you’re only using a single button and one push encoder to control all the functions available on the Quartet’s face; it’s a simple control design that’s surprisingly easy to use.

Around the back of the unit are four XLR/1/4” combination connections with XLR locking mechanisms, to save against any unfortunate accidents, and six ¼” TRS output jacks for connecting up to three speaker pairs; the headphone output is located conveniently on the side of the unit to avoid any confusion. One very useful feature on the Quartet that helps keep your workspace neat and tidy is the inclusion of a USB port for connecting MIDI devices such as keyboards and controllers. This negates the need for cumbersome MIDI interfaces while leaving another USB port free on your Mac, something that’s particularly handy if you’re working on a Macbook that only has two available USB ports. Having ADAT/SMUX inputs is also a plus here, and it’s possible to connect an Ensemble unit to the Quartet to achieve 12 inputs and eight outputs, or a Duet to your Mac along with the Quartet to gain six inputs and 12 outputs with minimal limitations on the sample rate. In addition there is a word clock output and a ground terminal next to the power supply input. 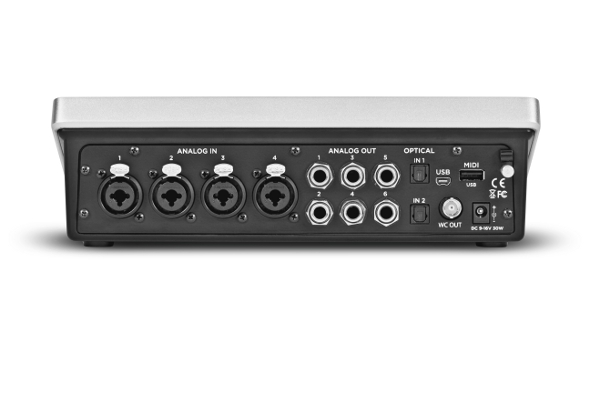 Much has been made of Apogee’s award winning sound quality and it’s a pleasing experience to have their well respected and transparent sound in such a well-designed desktop unit. Perhaps the main reason for this level of sound quality comes from the AD/DA converters which have been optimised so as to lessen signal degradation in the conversion process. Apogee has opted not to use USB 3.0 or Apple’s relatively new Thunderbolt protocol on this machine; the reason for this is that Apple have improved their Core Audio drivers making USB 2.0 faster than Firewire 400, and, in addition to this, the bandwidth offered by USB 2.0 far exceeds what is needed to run the Quartet, somewhat negating the need for the newer technologies. However, the type of USB cable required to connect the unit – regular USB A on one side and mini USB on the other – isn’t the most common in the audio hardware world; although the correct cable is provided with the unit, if lost it might be an annoying search to find the right replacement cable.

Of course, Apogee being a company that only caters for Mac users means that those without a PC will not be able to consider the Quartet. The reason for the exclusion of PC support for Apogee products appears to be the notion that they would make a better product if they concentrated on just one platform rather than catering for all; it makes sense and it’s true that their Mac products, this unit included, are of a very high quality. Those who are Mac users however will find that the Quartet bridges the gap left between Apogee’s simple desktop Duet unit, and their higher end Ensemble and Symphony units. With dual screens for clear, high resolution metering and visual feedback, a simple but effective control design, and plenty of options for reassigning using the Maestro 2 software, this unit is as good as it can currently get for Mac specific desktop audio interfaces.