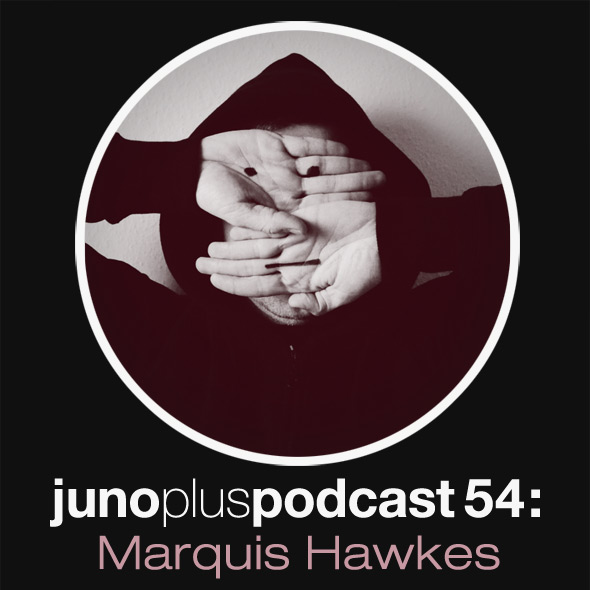 We lost count of the labels that were launched last year, but the ones that stuck in our memory largely did so because they struck a fine balance between impressive musical output and distinctive attention to visual detail. Glasgow label Dixon Avenue Basement Jams was one such newcomer; their output was clearly aimed at the dancefloor, but also came dressed up attractively brandishing clear coloured vinyl, amusing paper inserts and distinctive hand stamped logos.

Debuting with the deep acid stylings of Jared Wilson was impressive enough, but it was the subsequent Cabrini Green EP from the unheralded Marquis Hawkes that caught the ears of most, not least the thumping “Sealion Woman” which found it’s way into the sets of some high profile DJs ahead of release. “Listen to the music – that’s all you need to know” is all the information offered in Marquis Hawkes official bio, and thankfully his music thus far – with a further Dixon Avenue Basement Jams 12″ imminent – is compelling enough not to dwell too long on the possible reasons for his identity remaining a mystery.

Despite his self imposed anonymity, Hawkes proved to be most erudite in his responses to our questioning, and betrayed a vintage that’s backed up by a superb mix that joins the dots perfectly between the classic house and more contemporary fare – the transition from Parris Mitchell through Daft Punk to Hieroglyphic Being alone is worth listening to.

Good afternoon Marquis, how has 2013 treated you so far?

Hi, yeah, it’s been interesting so far, the reaction to the record wasn’t what I was expecting at all. We thought we’d do 300 copies and that would be it, what with it being a debut release.

Thanks for doing this mix, where was it recorded and how?

Thanks for giving me the platform to present it to a wider audience! I recorded it on the standard set up of a pair of Technics SL1210 mk2 turntables and an Allen and Heath Xone 92 mixer in a deserted ex-East German government building where a friend of mine has a studio.

Pretty interesting vibes there, but it’s totally out there in the depths of East Berlin, out by the German equivalent of the housing projects, so well away from the trendy hipster vibes of gentrified Berlin. It’s nice to see people still being in the spirit of moving into the places which aren’t “cool” yet and doing something creative with these deserted spaces.

The tracklist betrays a wide appreciation of classic and contemporary house music, where did the bug first bite you?

Hard to say, but I should point out I’ve had an interest in this stuff for over 20 years, so I’m aware of a hell of a lot of what has gone before, from Todd Terry jams and hip-house through to all the second wave Chicago stuff like Boo Williams right through to the latest incarnation of the real house shit from Omar S and Theo Parrish amongst others. Garage stuff like Todd Edwards and MK used to be a real guilty pleasure of mine also, alongside some of the UK stuff like Phil Asher and Nail.

I should add that my interest in music wasn’t restricted to this, as my listening habits go from the original jazz masters like Miles Davies and Charlie Parker, blues, right through to experimental electronic and techno stuff, passing hip-hop, soul, funk, psychedelic, rock, disco, and everything else along the way. I think a lot of people could do themselves some real favours with their music by becoming more aware of the history of this music as a whole.

Suffice to say the bug in the bassbin really bit me while I was jackin, doing the Percolator and the Butterfly on numerous dancefloors in many different places throughout the nineties. I can’t really pick one particular place as it all had a cumulative effect.

Is it indicative of what we’d expect from a Marquis Hawkes DJ set in a basement?

I think a great DJ selects to the audience in front of them, obviously without resorting to the lowest common denominator. I’m not going to bust out Dance Mania ghetto shit when the place is winding down, likewise I’m not going to drop more downtempo jazzy flavours when a place is about to go off.

I wanted to represent the various things I might play, but it’s always hard to make a mix at home or whatever when you don’t have an audience to vibe off of and react to. So it depends on what time of day or night I’m in the basement as to what part of the set reflects what I would play, but I’d always be doing what I feel is right to try and make sure the floor keeps moving.

There’s a self imposed cloak of anonymity surrounding you, what have you got to hide?

Honestly, I just don’t want the public face of the music side of my life to interfere with my private life; I’ve seen it happen too many times to too many people. That said I don’t want to create an identity behind a certain mask or styled disguise because then I’d be drawing attention away from the music even more. That’s the bottom line for me, it probably sounds like a total cliché, but i really just want to focus on the music.

How does this anonymity manifest itself when it comes to DJ gigs?

This is something I am still grappling with; I really don’t know the answer to this problem. I guess at some point I have to “face the music”! 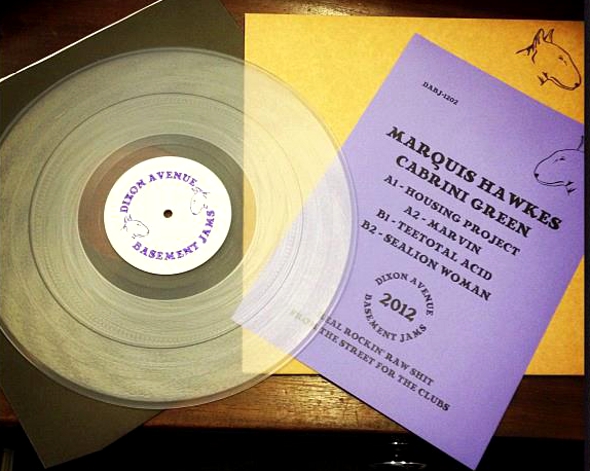 The Cabrini Green EP, your debut release for DABJ, was one of our favourite debuts of 2012, how did the hook up with the label come about?

It’s an old connection, I’ve known the guys for years, and they’d always known I’d been up to this and that, they asked me for some stuff when they were starting up. They set out their ideas and vision for the label which I really liked, a small roster of artists which together are like a family, and I have to say they really pushed me, supported me and nurtured me in a way I could never have imagined.

We have a kind of exclusive deal, at least for the time being, just handshakes and whatnot, so it feels like I’m part of something, but as I said before, none of us expected the attention we were going to get, we just thought we’d do some low key releases and contribute a little to what’s going on out there and above all else have some real raw shit from the streets to the clubs.

Your forthcoming return to the label seems equally disjointed, what’s the recording process behind your productions?

It’s all about an idea. It could be raw drum machine sounds or a synth line. It could be an old funk or disco sample or a vocal, but once the right idea comes if it’s gonna work it all falls into place. Sometimes it seems like the track writes itself, but I know in reality it’s dexterity in my medium and skills I’ve been honing for years. And it’s about your ears, knowing what makes the grade and what doesn’t.

I’m not happy with something being “good enough”, it needs to be awesome. You are representing yourself, so why bother if you’re only going to do it in half measures? I think a lot of people who are trying to do something with music would do well to take a step back, listen to what they are doing closely and decide if they want to be part of the noise or part of the signal.

What else is forthcoming? Any remix commissions yet?

There has been talk of remixes, but it hasn’t come about yet. I have more stuff in the works for Dixon Avenue; really I’m just concentrating on making the best music I possibly can rather than trying to rack up the releases like notches on a bedpost, which is why I was down with sticking to one family-like label. Other than that, I’m just really trying to hone my turntable skills so my audience can have the best experience possible when I perform.

That’s a tough one- it could change every night! Right now I’d go with Stevie Wonder “Love Light in Flight”, it’s a classic.