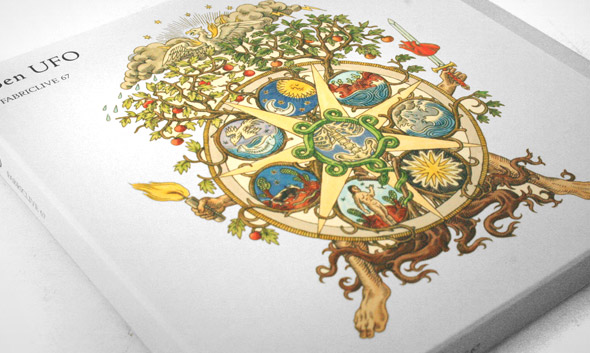 If there’s one thing that pretty much everyone can agree on, from critics to fans to artists alike, it’s that Ben Thomson is one of the good guys. Few contemporary DJs could find themselves on Rinse FM and Beats In Space within the space of a week; his importance in the breaking down not just of genre boundaries, but genre prejudices – especially as co-curator of Hessle Audio – should not be underestimated.

It came as something of a surprise to many then, when the lone voice of dissent appeared in the comments section of FACT’s news piece on this Fabriclive mix, bemoaning Thomson’s apparent speed mixing and likening the mix to “shopping on an internet record shop, flicking through but without deep engagement with any of the tracks”.  Those who read Andrew Ryce’s piece on the house/bass debate last year however may remember Thomson’s opinion of the subject, citing a Spencer Kincy set that changed his perspective on how house could be mixed, featuring the kind of spinbacks and quick blends that have much in common with the UK pirate radio style – a heritage that Thomson himself is steeped in.

Without wanting to give a lone comments section troll too much of a voice for what was obviously a fairly uninformed opinion, it’s something that occasionally got in the way of full immersion into his recent Rinse:16. The Rinse mix felt very much broken down into two distinct sections: house and, for want of a better word, dubstep. Fabriclive 67 however is a definite whole. While Rinse 16 was occasionally weighed down by the “big” tracks (“Swims”, “Cactus”) and contained occasionally jarring transitions as Thomson moved through genres and tempos, Fabriclive 67, despite being more eclectic on paper is actually a surprisingly monochrome set of tracks. Despite the first four tracks going through the bare-bones house of Mix Mup, the pounding ghetto rhythms of Delroy Edwards, the Bristol grime-techno of Peverelist and Kowton and the weirdo funk of the Sex Tags Mania mix of Tim Love Lee’s “The Tortoise”, the effect couldn’t be further away from ADHD mixing if it tried, combining the hypnotic and the slamming with a remarkable cohesion and maturity for someone still so comparatively young.

Of course its not a total reinvention; one of Thomson’s strengths has been how effortlessly he juxtaposes contemporary offerings alongside underrated classics, and Fabriclive 67 is no different; thus the billowing synth interlude of Jam City’s “Club Thanz” segues effortlessly into Herbert’s “Take Me Back” and the gurning acid pulse of Kyle Hall and Kero’s “Zug Island” takes a tumbling clatter into the early 90s minimalism of Richie Hawtin alias Circuit Breaker. If there’s one criticism that could be drawn, it’s that the first two thirds juggle such material so brilliantly, the final third, which is made up primarily of relatively recent tracks from Joe, Blawan, Bandshell and Pangaea comes across as comparatively less exciting to those fans of the Hessle family who will undoubtedly be quite familiar with the material. But when the tracks are of the calibre of “Release”, “And Both His Sons” and “Studio Power On”, it’s a minor gripe.

So, is this mix one of the all time great Fabric mixes? This writer would say yes. When future generations look back on this era that we struggled to explain in genre terms, it’s not hard to imagine this mix being the one document that people look to; the most comparable efforts from Hessle cohort Pearson Sound and fellow Rinse DJ Oneman, while not without their merits almost certainly won’t age as finely as Thomson’s offering. Looking further back in musical history and farther outside of his scene than those releases did, it’s a mix that never fails to let you see these tracks, old and new, in a totally different light. But more important than being an academic exercise in genre bending, Fabriclive 67 is never short of moments where Thomson just wants you to take a breath, and make the hairs stand up on the back of your neck. Breakneck track selection or no, isn’t that what a great DJ set should be all about?