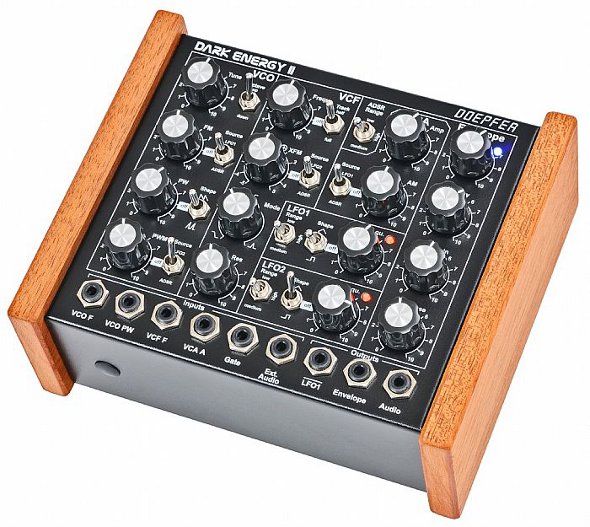 Having made an impact with their original Dark Energy analogue synth, we delve into Doepfer’s new Dark Energy II and find some interesting changes.

Doepfer’s history is surprisingly long if you consider that they developed their first Voltage Controlled Phaser module for the German Formant synth back in 1979. The Formant was actually a do-it-yourself-kit featured in electronics magazine, Elektor, in 1977. With various modular synths under their belt, Doepfer ended up embracing  MIDI technology in the 80’s and this ability to react quickly to fast paced technological change definitely paid off. Dieter Doepfer is the man behind the long standing audio hardware manufacturer based in Grafelfing, a relatively wealthy municipality located one kilometre out of the centre of Munich in the Bavarian south of Germany. Doepfer’s credentials are impressive, with a long list of products reaching back over the decades. Of note is the MAQ16/3 MIDI analogue sequencer, which was developed in cooperation with legendary German synth group Kraftwerk in the mid 90’s. After developing a series of products with more of a technological bent, such as the MCV4 MIDI to CV converter and the A-100 Analogue modular system, Doepfer released a small modular analogue synth, the Dark Energy I, in 2010, and it soon garnered favour with a new, younger breed of music producers who were looking to add some analogue warmth to their mainly digital domain.

The original machine was a small yet practical metal box with wooden side panels that made it feel very old school. It had sturdy vintage pots and a Curtis CEM3394 micro-processor, the same chip found on older synths such as the Sequential Circuits Six-Trak and their Split 8 polyphonic synth. But alas, there is no such thing as a never ending banquet and the CEM3394 is no longer available; instead of thoughtlessly chucking an alternative chip in the old machine, Doepfer took a much more considered approach by redesigning the Dark Energy so that the Mark II is effectively a different instrument to its predecessor.

“Both machines are the same size and at first glance they seem identical, but the differences become more apparent if you happen to fire up both synths next to one another”

Looking at the two synths side by side, the first thing you notice is the difference in the filter. The Mark I synth had a 24dB low pass filter with a 12 octave frequency range, which has now been changed to a switchable multi-mode filter with 12dB low pass, notch, high pass or band pass filters. Switching between these different filters is done by a continuous transition pot for precise control. The second notable difference is in the waveform of the single voltage controlled oscillator, with a triangle shaped core for the original synth, whereas the new machine has a saw tooth based core. The modulation level control (XFM) now has positive and negative range instead of just a positive range. Both machines are the same size and at first glance they seem identical, but the differences become more apparent if you happen to fire up both synths next to one another. 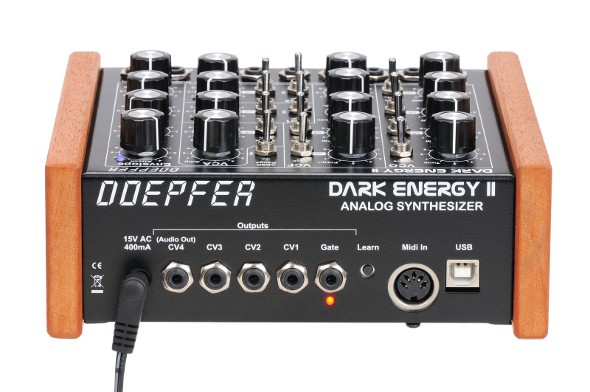 There is no hiding the simple truth that it is a lot easier to get warm and creamy bass sounds from the original machine than  the new one. The 24dB low pass filters dynamic range seems to lend itself to a warmer sound. But Doepfer make no bones about the fact and they even describe the new synth as a completely different sounding instrument. It still has the oscillator octave switches and it is still possible to get fantastic, thundering bass from the Dark Energy II, but its saw tooth heart makes a different noise to that of its older brother. If you are familiar with the first machine then you will be well used to the layout of the new version. There is one ADSR envelope control that is used to control the VCA as well as the VCF; balancing the range of each so you can control it rather than it controlling you takes a bit of getting used to, which isn’t always a bad thing. But when it comes to musical intention, your integrity is usually better served when you can design the sound you have in mind, which makes this writer feel that dual envelopes might have been easier to deal with. But that would have meant another four pots on the face of this little synth and over time it got easier to balance the filter and amp and I stopped missing separate ADSR envelopes. Even though it took a while to get used to this compact synth, I could eventually tease out the sound I had in my mind’s ear, as it were. There are plenty of connection possibilities still available; MIDI, USB and CV are all present and correct, and you can still patch your synth any which way you like using 1/8” A-100 patch cables.

We had the opportunity to compare the two synths using the Dark Time analogue sequencer module connected by CV/Gate. The Dark Time sequencer has dual eight step modules that can be set to run a 16 step sequence, two synths playing differing eight step sequences or one synth playing an eight step sequence, while some of the steps can be patched into filter or amp control for interesting modulations, and the whole thing can be slaved to your DAW by USB. There are further clock in/out features among a host of other analogue interface connections. Of course, if you prefer, you could just use plain old MIDI to run your Dark Energy II, or connect it to your computer via USB. Another quirky option available is the ability for users to remove the wooden side panels and connect Doepfer Dark Energy synths together using internal connectors, effectively allowing you to create your own modular synth from Doepfer units. The new unit seems louder than the original Dark Energy and it’s highly likely that owners of the Mark I synth, who want more than one oscillator will purchase a Dark Energy II and either chain it to their Mark I machine via MIDI, CV or use the internal connectors as described in the surprisingly readable and humorous manual.

“The characteristics of the Dark Energy sound are edgy, wild, flexible and distinctly analogue”

If you had to describe the characteristics of the Dark Energy sound, you would be forgiven for using words such as edgy, wild, flexible and distinctly analogue. As you tweak your sounds into existence (or out of recognition), you notice that the synth wants to be dirty. It wants to add an air of edge to your creations. Only a minor turn of the vintage style knobs is enough for this small modular synth to really roar at you. In addition to this latent edge is the fact that using the Doepfer unit is a joyful experience. There has been a resurgence of interest in analogue synths and sequencers, seemingly as a back lash against this increasingly digital world. Here there is comfortable middle ground because Doepfer synths have USB connectivity along with more old school CV/Gate and MIDI connections and they all seem to integrate well under the Doepfer Dark banner.

There are other modular synths on the market such as those from MFB. The Moog Minitaur is a desktop bass synth module and the Tetra and Mopho from Dave Smith offer other desktop possibilities. But there is something very re assuring about the build quality in the Dark Energy II. It has been made from wood and metal with little plastic to be found. It feels like an instrument that has been fashioned for discerning users who don’t care for software integrated editing and don’t want to be able to recall patches via digital circuitry but want to create sounds for magical moments that can then be captured in any fashion they like, including on your DAW. All with a satisfying edge that is difficult to quantify. The original machine, rightly, has many fans but it has passed into that great gallery of synths that are no longer in production. The Dark Energy II will no doubt have a long and prosperous life and will be welcomed by fans of the first synth as well as producers who are only just rediscovering the potential of analogue synthesis.