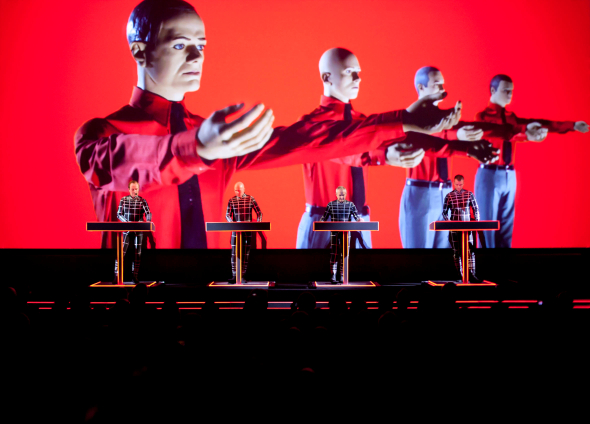 Kraftwerk will preside over a series of performances in the cavernous Turbine Hall at London’s Tate Modern, it has been announced.

The German electronic pioneers have recently decided to undertake a series of eight day retrospective residencies under the banner of KRAFTWERK – THE CATALOGUE 1 2 3 4 5 6 7 8, succesfully debuting the performances at New York’s MoMA in April of this year before adding a series of dates in Dusseldorf, Germany, next month. This morning the Tate Modern announced Kraftwerk had agreed to undertake this series of chronological explorations of their sonic and visual experiments in their iconic Turbine Hall, marking the group’s first performance in London since 2004.

Set to take place over eight evenings from February 6 onwards, Kraftwerk will present eight classic albums from their celebrated discography, alongside additional compositions from their back-catalogue covering some 30 years accompanied by “spectacular 3D visualisations and effects”. A press release from Tate Modern has the museum’s director Chris Dercon saying: “As a former power station, Tate Modern’s Turbine Hall is an ideal venue for Kraftwerk’s explorations of technology, energy and rhythm. Bringing together music, video and performance, these events will be true gesamtkunstwerk – a total work of art.”

Tickets for the series of performances will go on sale next Wednesday, December 12, from 7.30am via the Tate Modern site, where you can find full information.