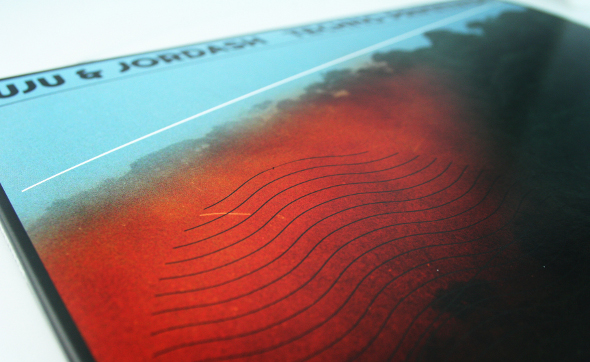 Amsterdam-based Israelis Juju & Jordash have always been difficult to pin down, but in recent times their musical shifts have been getting ever more frequent. Their digital-only 2008 debut album, major mishap, portrayed them as electronic jazz experimentalists. The 2009 follow-up, a first outing for Dekmantel, saw them play around with new beat, Italo, deep house and murky analogue techno. Since then, their excursions have fallen into two camps; off-kilter leftfield house (see the space disco on crack vibes of Golf Channel release “Jewsex”) or formidable analogue workouts designed to please dancefloors.

Approaching Techno Primitivism, their third full-length, it’s hard to know what to expect. At 75 minutes long and 15 tracks deep, it’s also not the sort of set you can get your teeth into quickly. Given that it’s also their most adventurous and densely layered outing to date, it clearly requires serious attention. This is not an album for those who want a quick fix, or something to while away the time on dreary tube journeys. It could definitely be described as epic.

It is, though, certainly worthy of the time and effort. Moody, dark, unpredictable and, at times, impenetrable, it casts them as modern-day post-punk experimentalists – a kind of 21st century version of Cabaret Voltaire or A Certain Ratio raised on murky techno, paranoid dub and industrial electronica. It was, apparently, the product of several months spent jamming with a bunch of vintage synthesizers, dusty drum machines, electric guitars and various effects units. It was clearly time well spent.

There are moments of almost blinding light – see the out-there surf-electronica of “Backwash”, the woozy dub-funk melancholy of “Rogue Wave”, or the blissful Balearic dub of “Way Of The Road” – but generally the album’s mood is much darker. At times, it’s almost claustrophobic. Check, for example, the nightmarish, Factory Floor-on-downers shuffle of “Shrublands”, or the fuzzy proto-acid of “Powow”; although vastly different aesthetically, they inhabit the same atmospheric space. The one uniting feature throughout is their use of space. Most of the tracks are rooted in some way in dub, either via the use of deep basslines or, more frequently, grainy old effects units. It’s perhaps this that gives the album its instinctively creepy feel. Even the album’s distorted, in-your-face freakouts (“Dr Strangepork”), and druggy soundscapes (the unsettling “Echomate”) come coated in a weird reflective glaze; it’s one of the album’s most stylish features.

That’s not to say that the album is devoid of beauty. Even Techno Primitivism’s crustier moments, such as the “Love Cats” in dub jazz flex of “Slow Boat To Haifa”, or confusing opener “Stoplight Loosejaw”, exhibit a quiet kind of wayward beauty. This also serves the purpose of amplifying the album’s more obviously positive moments. It’s because of this that “Loosey Goosey” sounds like the perfect MDMA experience distilled into six sublime minutes. Creating an album of this depth, variety and ambition is one thing; making it hang together well is another, and this is exactly what they have achieved.