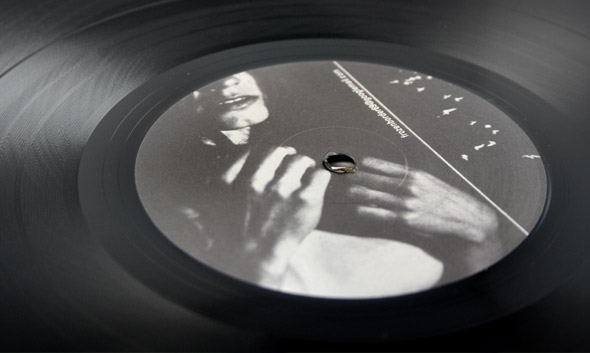 Although the anonymity afforded to its artists in the early days of Horizontal Ground may have been liberating for those making the music, it seems fair to say that the lack of an entity to latch an opinion to made it difficult to distinguish between one finely-sculpted yet functional techno release from another. Though the appearance of artist names (and evocative EP titles) has certainly helped to give some shape to the label’s ethos, the techno of Szare, Skirt and AnD all seem to share that same unique corner of greyscale minimalism. In other words, its not often you’re surprised by a Horizontal Ground release, despite its well earned mark of quality.

With a name as anonymous as those early releases, Samuel Kerridge has the kind of moniker that inspires images of more reductionist techno. Within a few seconds of listening to “In & Out” however, it’s obvious that he’s a producer working with a very different set of tools, with a barely audible kick drum and a snare that’s more like a brushed footstep in the snow, complete with a melody wrapped in a codeine blanket that comes across like a chopped and screwed Basic Channel track. The mid-tempo lurch of “In and Out” will draw obvious comparisons to Andy Stott, but “Auditory System” makes it clear he’s no mere imitator. It may share that sub-100bpm crawl, but its bleak soundscape, pock-marked with microscopic breakbeats and rippling electrical surges, sounds like something Bristol producer Vessel once admitted to doing: making a track at twice the speed and creating unexpected rhythms out of what’s removed rather than added.

The industrial leaning “Remove Yourself” comes as an even greater shock. Taking the kind of unpredictable, afro-futurist rhythms of William Bennett’s Cut Hands moniker and throwing them into a slow-churning cement mixer with some heavily distorted acoustic bass, the result is an industrial slurry that recalls Powell’s lo-fi jumble of post-punk components. “Membranous Labyrinth” closes the EP with a heavy slice of industrial drone in the Emptyset or Ekoplekz mould, its cerebral drilling slowly giving way to a thick, ominous kick drum and rippling textures which suck the surrounding air into its monolithic wake. It’s a fittingly grandiose end for what feels like a landmark release for Horizontal Ground. Although the cynical may see it as a canny bit of A&R to sign a artist that seems to so perfectly encapsulate the current zeitgeist of British techno being spearheaded by Modern Love and Blackest Ever Black, when the results are as impressive as this it would be churlish to be too critical of what is a remarkably assured debut from a talent to watch.

1. In & Out
2. Auditory System
3. Remove Yourself
4. Membranous Labyrinth