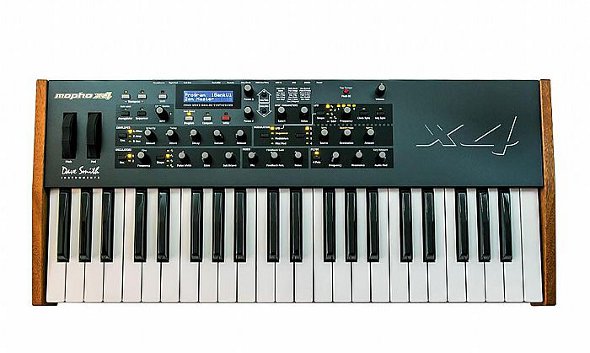 Dave Smith brings us the polyphonic sibling to the hugely popular monophonic Mopho synthesizer. So how snugly does the Mopho x4 fit into the Dave Smith family?

Practical analogue synths have been around since the late 1960s with Bob Moog’s products, but these early synths were monophonic – they could only play one note at a time, which is great for lead sounds and bass lines, but less useful for more subtle accompanying roles. So musicians were stuck with organs and electric pianos, of varying types, to voice fuller harmonies. The Prophet 5, created in 1978 by Dave Smith and collaborator John Bowen, has usually been credited with the advent of real polyphonic synthesis, but actually that barrier was crossed four years earlier by Tom Oberheim, who had managed to create a four voice synth called the FVS-1. However, it wasn’t until the introduction of the micro processor into the world of synthesizers that a truly practical and affordable machine could be put on the market, and that is where Dave Smith and his Prophet 5 came in and stole the show, with their fully programmable analogue and polyphonic synth, which also allowed you to save and recall patches of your own creation. It’s something that we take for granted now that was a massive leap forward back then.

Let’s fast forward to a time when Sequential Circuits is but a distant memory and the popularity of the analogue synth has waned in favour of sleek and efficient digital technology, and then come circling back in vogue again with a whole new generation of sound design acolytes looking to enter the world of subtractive synthesis. Dave Smith has the jump on his competitors here, with the introduction of his Mopho analogue monophonic synthesizer that has been flying off the shelves since it was released in 2010. The original Mopho was essentially a single voice of the Prophet ’08 polyphonic synth, but with a sub oscillator for added meat in a package that was both practical and affordable. With that in mind, Smith has produced a similarly practical polyphonic synth that attempts to build on the reputation of its sibling – the Mopho x4.

The 44 note keyboard is spot on for a synth of this type, with just the right amount of flexibility to be able to take it out of the studio and on the road. Although this keyboard is billed as having a fully weighted action, this writer feels that this term, although technically correct, is a bit misleading as it makes it sound as though the keyboard has a piano type action, which it doesn’t; it does however offer after touch, and it is velocity sensitive, making the action itself feel luxuriant. The chassis is a sturdy box bookended with wood finished sides which give it a classic look, with the modulation and pitch bend wheels located to the left and above the keyboard in traditional Dave Smith style. The LCD display is small and supports two lines of data, and thankfully does not taking up too much space in the upper middle section of the unit. All of the menus are navigated in the simplest way possible – all you have to do is turn a knob or click a button and the display brings up the set of parameters you’ve just been playing with. For extended features, such as some of the sequencer, arpeggiator and modulation elements, there is a miscellaneous parameter knob that allows you to scroll through, as well as a pair of parameter knobs and navigation buttons if you prefer.

“With four banks of factory programmes, this synth is packed with fat bass sounds, smooth pads, and snappy metallic sync noises, all delivered through a 100 per cent analogue signal path”

The flow of the layout is sensible, with oscillator and filter envelope knobs shared and toggled between using a single button to scroll through the various modes. You can get extended control over the two oscillators below by selecting the type of waveform or changing the pulse width of a square wave and adding glide and sub. The LFO is completely malleable, with frequency and shape controlled by a single knob and clearly marked buttons.  It gets interesting here as you discover the built-in sequencer in the modulation selection. This isn’t a sequencer as you might find in your DAW or one of your old digital keyboards from the late 80s; it’s designed to be more like the modular sequencers dating to before the days of MIDI technology (a technology that Dave Smith developed himself). Getting to grips with this sequencer takes a little time, as it is one of the few aspects of this instrument that relies on the display to show you what is happening. You can programme up to 16 step patterns and sync them via MIDI or use the internal clock, which has its own dedicated speed knob displayed in BPM on the screen. It can be triggered note by note or via a single trigger on or trigger off command found in the miscellaneous parameters menu.

The arpeggiator is also fully controllable and editable via the menu screen and the buttons on the front panel, including an arpeggio hold function. Once you have edited a patch or created your very own sound, then you can save it in any of the four performance user banks. One of the features of the old Sequential Circuits synths was that calling up a patch was as simple as typing the patch number into a pad on the front panel, or keying in a bank and patch number. This allowed for quick access to different sounds mid-song and as raw in its simplicity as it may sound, it is still an efficient way of organising sounds, because all you have to do is remember two digits. However, with the menu and banks configured the way they have been on the Mopho x4, it makes jumping between patches a very lumpy affair. Also, changes between patches aren’t very smooth, with tail ends of different sounds bleeding between each patch. It is possible to organise your sounds the way you like in any of the four user banks but that would mean, in some cases, duplicating patches, which just feels inefficient.

The Mopho x4 isn’t the only polyphonic analogue synth in Dave Smith’s arsenal. The Prophet ’08 has been a popular beast for a few years now with its five octave keyboard, sequencer, arpeggiator and eight voice polyphony. (The only things missing are the sub oscillators on the Mopho x4.) If you require a larger polyphony then it is possible to chain a Dave Smith Tetra, Prophet ’08 or Mopho to the x4 using the poly chain port on the back to expand to up to 16 notes.

This keyboard addresses the need for a performance based analogue polyphonic synth that is both light and sturdy enough to throw in a case and onto a plane. The power adapter is designed to have interchangeable pins so you can literally go any where in the world, plug in and play. The only serious question mark this keyboard draws is over the build quality – the knobs and buttons do feel a bit cheap; this writer misses the satisfying and chunky controls that were found on the old Sequential Circuits synths. I’m referring to the sort of quality that allowed one well-known musician to tour his Prophet 5 around the world for 32 years with only one service to date.

Essentially, the Mopho x4 is exactly that; four Mopho’s together, with plenty of connectivity including MIDI in, out and thru, USB and CV as well as stereo outputs and separate headphone outputs. It packs a lot of great features, such as the modular style sequencer and arpeggiator, into a 44 key synthesizer that is both lightweight and stylish. There are some up to date features such as a free downloadable Mopho x4 editing suite for your computer, which helps you create patches – that can be found here. If you’re looking for analogue polyphony and you don’t want something old and second hand, then you would be well advised to have a look at the Mopho x4.