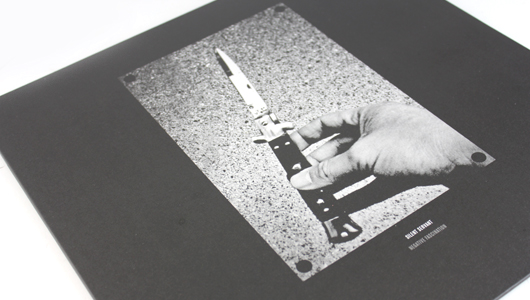 There was only ever going to be one record with which to lead our weekly round-up – the eagerly awaited long player from Sandwell District associate Silent Servant.

Although it may seem strange for a Silent Servant album to arrive on a label that isn’t Sandwell District, Hospital Productions has been pushing the industrial tendencies of label owner Dominick Fernow’s Prurient and Vatican Shadow aliases for many years, and Negative Fascinations is right at home on the imprint. A true LP, all the productions represent an entity rather than a collection of dancefloor tools.  Tracks such as “Invocation Of Lust”, which sway effortlessly across desolate plains of synths and distant melodies, fall neatly into place with others; “Moral Divide (Endless)” being its natural epilogue as ghostly sounds and transmuted effects are caught in a whirlpool of rough, analogue beats.

It was a strong week all round for techno, with the long awaited sixth round of Skudge remixes finally appearing from the duo’s Swedish stronghold and Answer Code Request’s remix, with irresistibly catchy breakbeat, menacing sub bass infusions, sharp percussions and raved-out synths outdid Marcel Dettmann’s effort by some margin, while Untold also released the last of his Change In A Dynamic Environment series on vinyl, delivering two dark techno numbers with subtle post-punk influences. This week also proved that the techno album has never been stronger, with Transsektoral, Barker & Baumecker’s debut for Ostgut Ton, joining the dots between Berghain and UK bass culture with some skill, and minimal master Robert Hood’s stylish return with Motor: Nighttime World 3.

Occupying a hinterland somewhere between house and techno was Frak’s Borft EP, the latest release from Sex Tags Mania’s Norweigan HQ, providing three supreme cuts of electro leaning acid techno that allude to no higher design than perfectly fitting the sweatiest moments of your desired clubland experience, with a smudgy remix from DJ Sotofett executed in a manner that’s almost heavenly. This week also saw the release of one of the finest deep house albums of the year in the form of Jacob Korn’s debut album You & Me. Collaborating with a different artist on each track the effect of his fine musicianship is only enhanced,  with deeper cuts like the dubby friction “Friction” and the woozy rhodes melody of “The Drifter” going alongside some good time party jams such as the San Soda collaboration “Punta Del Este” with its bumping piano riff and the choppy, disco-leaning Cuthead collaboration “Makin’ Love”. Rush Hour meanwhile preceded their forthcoming compilation documenting the late 80s and early 90s output of Elbee Bad, aka Lamont Booker, with a vinyl sampler featuring “New Age Of House” along with two previously unreleased mixes that will apparently not appear in any other format. Not content with that, the Amsterdam imprint also dropped the latest in their “not on label” series with another four cuts of twee keyboard excursions from Heatsick.

This week also saw the release of the second transmission from London based imprint How The Other Half lives, featuring a track from short lived improvised electronic act Hounds Of Hate, “Purple Stuff” originally sat as a B Side to their Head Anthem release and the pulsating, low slung slow jack clearly resonated somewhat with HTOHL boss ZNTN who remastered the track and enlisted Timothy J Fairplay, Photonz and their compatriots Zoda Cade to remix it. This was nicely complimented by the physical release (finally) of the Chromatics’ Kill For Love on sumptuous double 12″, a beguiling set that draws on Jewel’s usual cinematic influences. Musically, it sounds like a particularly heart-aching road movie, shuffling across the mid west via dark soundtrack moods. Those of a Scandinavian disco persuasion meanwhile should investigate the two Todd Terje extensions of a pair of tracks from Lindstrom’s forthcoming album, and the long overdue return to the twelve inch game from the Rollerboys imprint, Epic Disco Vol 2, featuring cuts from Prins Thomas, Mark E, Bulgari and Ultracity.

Sporting the most delicious artwork of the week was the second release from Old Apparatus’ Sullen Tone imprint, the superb Realise. Supposdly the work of a single member of the collective, the difference audible across Realise is stark; although opener “Chicago” still growls and lurches like the alternate reality dubstep of their previous releases, its piano riff and 4/4 beat references the house music of its namesake, while the percussion of “Found” rattles like a steampunk pinball machine.

Over at Juno Download, cosmic explorers Simon “Woolfy” James and Dan Hastie – aka Woolfy vs Projections – released The Return of Love, their long-planned follow-up of 2008’s superb The Astral Projections of Love. Released via effervescent Munich based label Permanent Vacation, it was a noticeably softer set, adding folksy acoustic diversions (such as “Electric Storms” and “Cherry Blossoms”) and blissful MDMA pop (“Set Me Loose” and “In Your Own Worlds”) to their tried-and-tested star-gazing formula. And after impressing with the Cocoon EP earlier in the year, Fur returned to UNO for an EP that springs off from detailed and textured house and techno into a much bolder sound world characterised by a kitchen sink approach, but also keenly honed into something truly enjoyable to listen to.

On the CD front, Dan “Dusk” Frampton and Martin “Blackdown” Clark released their second album, Dasaflex. It offered a deep but surprisingly floor-friendly take on dubstep, taking influences from a variety of sources – IDM, electronica, garage and UK funky, most obviously – for a series of well-polished but pleasingly analogue-sounding cuts full of energy and, most importantly, good ideas.