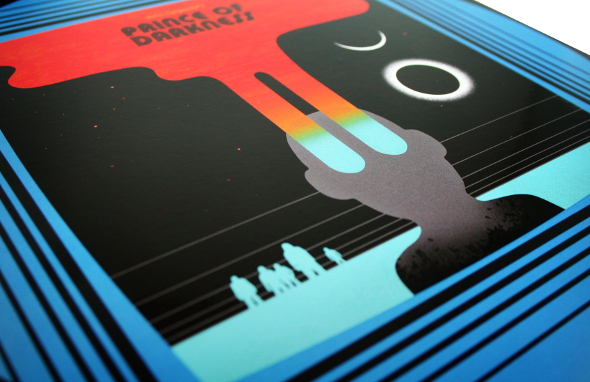 You’ve no doubt seen us dedicate some words to the Death Waltz operation over recent months and fans of the Carpenter/Howarth combination should check out their latest reissue.

As you can see from above, it’s a seriously impressive looking repackaging of the shlocky joys of the Prince Of Darkness OST – a film that was perhaps unfairly panned upon release back in 1987 – we get the impression this eight track reissue filled with classic Carpenter tropes such as choral notes, bombastic canned strings and spooky bass arpeggios was one of main reasons behind the foundation of Death Waltz. Just behind in the reissue stakes was the comprehensive Sensations’ Fix retrospective from the ever adventurous RVNG Intl, cramming some thirty tracks of md 70s recordings from the obscure Italian trio lead by the charismatic Franco Falsini – as with most releases on this label, Music Is Painting In The Air is less an album you listen to, more an album you fully immerse your senses in.

Should you require vinyl of a more immediately gratifying nature then this week had you fully covered, with a healthy selection of techno records lead by the arrival of Skudge on Boddika’s Non:Plus operation. Lead track “Fingers” is about as techno as you can get mate, echoing Shed’s Equalized output via incendiary melding of peak time chords and strong 909 kicks. Meanwhile Hemlock’s description of Randomer’s three track We Laugh We Scream release as “deranged acid breakbeat music” proved all too appropriate and was challenged by the latest Avian release from MPIA3 in the overdriven 303 potency stakes – the superbly titled “Squatter’s Dog” practically bleeds sparks of bright green electricity. Tadd Mullinix’s homage to Beats In Space (replete with crazy good Madteo remix) and a Dolly debut for Steven Tang under his Obsolete Music Technology alias meant there was plenty of Stateside techno representation too whilst special mention goes to fledgling Paris operation Technorama who coaxed more pummeling nightmarish techno out of German artist Sawlin.

Occupying a paragraph all of it’s own mostly because it’s not house, it’s not techno and it’s not whatever term is currently being used to portray the hardcore ‘nuum is We Are Family Vol 1, the first 12″ release on West Norwood Cassette Library sporting some raucous contributions from the label’s principal artists. There’s been rampant dialogue amongst the Juno Plus staff as to who from Don Froth, Milyoo, WNCL and Knowing Looks was best dressed on this record, but this writer thinks it’s the Froth man’s killer “Lifting Weights” that just shades it – a rowdy concoction of crafty breakbeat edits, mutant UKF percussion and brilliantly bizarre samples.

If you want deep house you can’t get much deeper than a K Alexi 12″ on the Chiwax label, the risqué “www.love.cum” and schizophrenic analogue dynamics of “K Beat” demonstrating this long term fixture of Chicago House has lost none of his production potency. Representing a newer breed of artists, Nsyde came through with another excellent 12″ with Danish producer Samuel Andre Madsen at the helm for the Northwest Cave 12″ – with the title track a near perfect example of endlessly swirling emotive deep house, whilst the lesser spotted Aniara returned with one example of luxuriant and tranquil house music – this time from Japanese producer Auji. In a week of notable reissues, Versatile got in on the action with two Chateau Flight classics which you might want to check just to see how amazing “Cosmic Race” sounds when pitched down to 33rpm.

This week at Juno Download, Mordant Music dropped two releases from Tod Dockstader. The first saw the producer receive the Mordant and Ekoplekz treatment, with the latter remix seeing low frequencies and swamped melodies moving the track forward in the shadow of a distant groove. The second release was Electronic Vol 1, his first LP for the Mordant, which explored everything from modern classical music to broken beat, drone, electronica and jazz.

Similarly exotic were the two compilations that grabbed our attention this week, with Belgian imprint Meakusma turning in an eight track blend of leftfield exotica from Tase, Dresvn, Ssaliva and Bepotel, while Gilles Peterson’s Brownswood imprint released the third instalment in its Electr*c series, a chunky selection with a tendency towards rich melody across the board, from Aftawerks’ engrossing mellow acid workout to the contemplative juke dazzle of Jaded Laur, but there’s also space for some more primal club tracks; just check the ghetto tech flex of Frank Rodas’ “Kick It VIP” for all the proof you need.

There was also some new STL to get excited about – Stefan Laubner is the undisputed master of the left of centre house groove and on “Where Have You Gone”, he proves his worth yet again. It’s with “Your Turn” that he really impresses, however; the track marks a departure of sorts for Laubner, with a dubby, snaking bassline at its centre, and the metallic drums and a linear rhythm marking out the German producer’s most techno focused release to date. Staying on European techno circuit, Steffi is one of the few DJs who manages to get the balance right between deep house and forceful techno – and she has translated her DJing approach to her latest release. The title track of her Schraper EP starts off in tracky mode, its dubby drums, clicking, reverberating claps and pulsing bass suggesting a focus on stripped back techno, but midway through, the arrangement veers into a deep synth passage with echoes of Omar S’s raw sound.

Bringing more of the rough and tumble jack-action to Unknown To The Unknown, Capracara was as up for the party as ever on “Ronin”, a deliciously raucous garage house jam; Juno Plus podcasters Kodiak stepped up for a remix, and they proceeded to delineate everything in sight with a chunky broken beat and dense layers of head-spinning melody, vocal samples and effects. Elsewhere, Photonz, Timothy J Fairplay and Zoda Code remixed Hounds of Hate to intoxicating effect, while LA-based producer Diego Herrera aka Suzanne Kraft shifted between melancholic analogue deepness (the title track), sprawling proto-house funk, spiralling analogue electronica, Dream 2 Science-ish deep house and touchy-feely nu-Balearica on Horoscope, a release that was coated in an extra sheen of essentialness thanks to remixes from Max D and Secret Circuit. Finally, James Blake donned his seldom seen Harmonimix moniker for an R&S single that saw the producer again team up with Roll Deep member Trim, while Planet Mu released a rather excellent debut album from juke starlet Young Smoke, with Space Zone a wild cocktail of electronica fused with juke sensibilities.

On the CD front, Dutch imprint Kindred Spirits curated a compilation  of sizzling hot disco, boogie and disco-funk from Surinam, a tiny country in the North of South America. It’s a revealing set, showcasing a string of brilliant productions (see the warming delight of Awing Reingould’s “Sweet Dreams” and Sumy’s “Funkin In Your Mind”) and slick covers (Thunderstorm’s brilliant take on Skyy’s disco-funk classic “Here’s To You”). Lord knows how they uncovered these gems, but they’re all shit-hot. If you dig disco, you need it in your life.