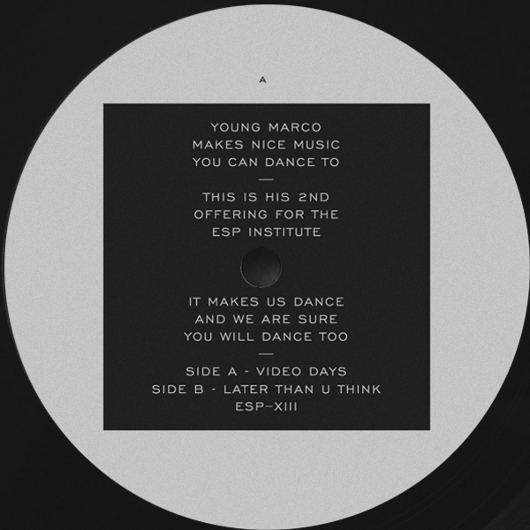 Rush Hour’s resident secret weapon Young Marco will return to New York imprint ESP Institute with the Video Days 12″, set for release at the end of this month.

For the uninitiated, Young Marco’s role within Rush Hour has quietly expanded from overseeing the label’s artistic direction to becoming fully involved with the Spuistraat operation’s multi faceted projects, and he has also been sharpening his own production game over a select few releases and remixes. Indeed, Video Days will be his third outing on the ESP label run by Andrew Hogge aka Lovefingers, following last year’s devastatingly subtle Nonono 12″ and a remix of Australian producer Michael Ozone released last week. You can sample the two track EP below; the title track is an expertly executed slice of twinkling, eyes-wide-shut analogue house, but it’s the rolling toms and gentle melody of B-Side offering “Later Than U Think” that has us in raptures.