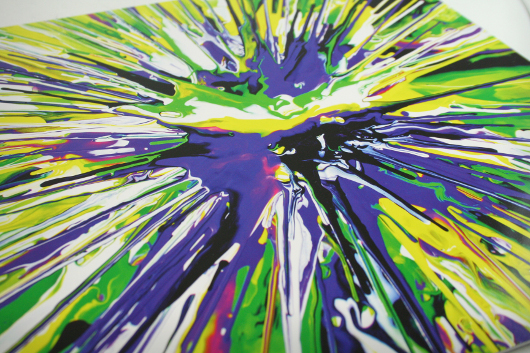 It was hard to resist going for a splash of colour when deciding this month’s best record sleeves.

Easily the most striking record to arrive at Juno HQ this month was ZSOU’s Written In Dust, which arrived in a high gloss sleeve splattered in paint, which proved a neat match for the duo’s alluring brand of bluesy psychedelia. We weren’t in the least surprised to learn that Dalston boutique LN CC was involved in this release – it oozed quality from every corner and even came with a pull-out poster version of the sleeve. Another outlet noted for its attention to detail is Vakula’s Leleka imprint, which prefers to focus its visual creativty on the vinyl itself rather than the sleeve, and so it proved with Ashes To Machine’s excellent Resistance 12″, which arrived with a hand-stamped centre logo and some particularly fetching marbled vinyl.

Equally dashing were the two records from Editions Mego we selected for this month’s list. First up was Nick Edwards’ Plekzationz LP, which was adorned in a Bacon-esque oil impression of the producer, leading Juno Plus writer Oli Warwick to speculate that it signified the Bristolian’s attempt to step out of the shadows of the Ekoplekz mythology. The second Mego drop was Mark Fell’s Sentielle Objectif Actualité, a brilliant collection containing seven remixes of the first three 12″ singles released on his Sensate Focus imprint, housed in a sleeve that reflected the old-meets-new nature of Fell’s music. And although Onra’s move to US label Fool’s Gold was something of a surprise, the fact that Deep In The Night arrived in neon-lit artwork certainly wasn’t; the record took its stylistic cues from the Parisian’s Long Distance LP for Irish imprint All City, evoking images of shimmering L.A. sunsets.

Sex Tags nerds will have noted with some glee the arrival of two records from the Scandoweirdo empire this month, namely the warped disco of Kong Oscar and DJ Candle In The Wind’s split Go!/Hussi Dise 12″ for Sex Tags UFO, and a dinked reggae 7 inch on Sex Tags Amfibia from Don Papa and Kambo Super Sound. It was the former that impressed us most, with some busty comic superhero artwork featuring prominently on the left hand side of the sleeve, containing all the faintly ludicrous visual elements one naturally associates with DJ Sotofett’s imprint. Of course it couldn’t be all colour this month, and the stark black and white design of Cut Hands’ Black Mamba 12″ for Blackest Ever Black brought an element of morbidity to proceedings.