In what can only be described as a bona fide coup, Delusions Of Grandeur have collared celebrated Planet E and Rush Hour artist Recloose for their latest release – and thrown in a Tornado Wallace remix for good measure.

Anyone with a frim grasp of the Recloose story will be fully aware of that fateful day in late 90s Detroit when he secretly passed a certain Carl Craig a demo tape via rye sandwich based means, and since then the producer, aka Matt Chicoine, has graced everyone from Planet E and Rush Hour to Playhouse and Sonar Kollektiv with his multi faceted take on dancefloor sounds. Currently residing in New Zealand, Chicoine ended a three year production hiatus in 2011 with the Saturday Night Manifesto EP on Rush Hour, a return no doubt smoothed by Early Works, a Recloose retrospective the Amsterdam label put out in 2010, and he also delivered another EP for Rush Hour earlier this year in the shape of Magic.

Now the Hit It Or Quit It radio show host will surface on Delusions Of Grandeur next month, a move which continues the label’s knack for occasionally releasing music from the more discerning end of the deep house spectrum. Don’t Get Me Wrong features two high octane productions that touch on disco, house and jazz – you can get a taste of “Don’t Get Me Wrong” below -while Simpsons expert Tornado Wallace follows his great Matthew Dear remix with a revision of the title track that winds down the energy levels to give the track a entirely different mood.

Delusions Of Grandeur will release Don’t Get Me Wrong by Recloose on September 24. 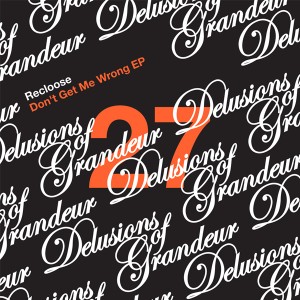