Berghain reported to remain open in 2013 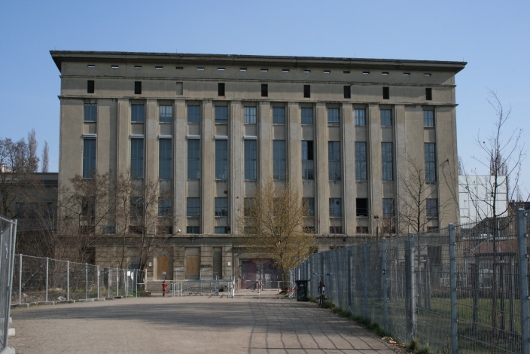 Despite fears to the contrary stemming from a rate hike being brought in by German music royalties collections agency GEMA, Berlin’s Berghain club will remain open in 2013.

The increase in fees is set to hit clubs like Berghain the hardest – with GEMA bringing in a system that charges increased fees based on size of venue, and length of event, levying 50 per cent surcharges to those parties lasting five hours and eight hours or more. Although much has been made of how this would decimate Berlin’s nightlife, and many outlets reported Berghain’s potential closure, Berghain themselves were fairly quiet on the matter, only going public to express their concerns on GEMA’s plans.

However, any doubts on the club’s future (for the foreseeable) have now been laid to rest. As Resident Advisor report, the club’s plans to remain open in 2013 were revealed in German newspaper Berliner Zeitung. Although it’s not clear how exactly the club will remain open, plans for an extension to the club which would have involved space for classical concerts and ballet performances have supposedly been shelved, and GEMA’s original surcharge plans have been changed, meaning that instead of 50 per cent, only 25 per cent will be charged after eight hours of being open.

Although protests and a petition have been organised against the plans, it looks to be a done deal, with the focus now being on how damage from the changes can be minimised. Coincidentally, this news broke soon after we had spoken to Berlin resident JR Seaton (aka Call Super) on the GEMA proposals, where he indicated that it would take a strong push to get the results Berlin’s clubbing community desires, stating:

“I went on the (GEMA protest) march in June and was saddened to see that politically the whole protest had either been hijacked or, worse, allied with the Pirate Party and Die Linke (the left Left). I think if the protest movement is to succeed it has to wise up politically and actively lobby (the Mayor) Wowereit on economic grounds. I do think there will be a compromise, but that is no reason to relax. I’m not making any judgement on Die Linke by the way, it’s just that sadly to get things done quickly politically (and time is not on our side here) one still has to make arguments that are rooted in maximum economic growth.”

More news on the matter as details emerge.