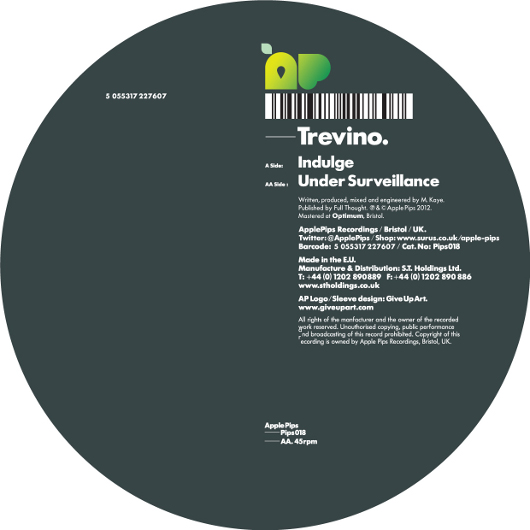 Drum & bass turned techno producer Marcus Intalex will be next to join Appleblim’s Apple Pips stable with the release of a single under his Trevino alias.

Consisting of two tracks, the release features “Indulge” a particularly Drexciyan number complete with breakbeat rhythm and dystopian pads, and “Under Surveillance”, a significantly moodier cut which combines the atmosphere of early dubstep with a jagged electro bassline.

It’s probably the highest profile Trevino release to date for Intalex, who, after nearly two decades producing drum & bass, changed tack and previewed the Trevino alias with a track on Martyn’s 3024 imprint last year. Since then he has gone from strength to strength with his unique brand of rough yet melodic techno inspired by classic Detroit styles, with releases for [Naked Lunch], The Nothing Special and his own Revolve:R imprint.

It’s also another string in the bow of an increasingly diverse Apple Pips imprint, whose releases this year have now covered a spectrum of genres, adding the techno of Trevino to the old school dubstep of Gatekeeper and the Bristol house of October and Borai.

A. Indulge
AA. Under Surveillance