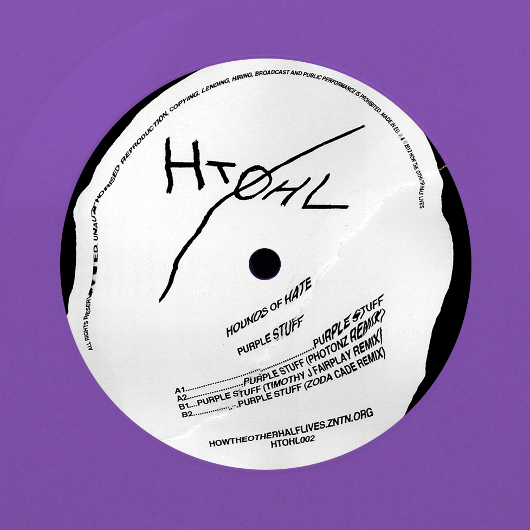 Fledgling London label How The Other Half Lives return with their second release next month, a remix retrospective of the short lived experimental electronicists Hounds Of Hate, and we’ve got a Timothy J Fairplay shaped exclusive from it.

If you don’t know Hounds Of Hate then you should! Active between 2009 and 2011, the band were led by Stan Iordanov and performed live electronic music without any sort of backing track. Alongside two 12″s for Back Yard Recordings and Italian Beach Babes, Hounds Of Hate also collaborated with Hype Williams on the uber limited Deuces cassette release. This writer was lucky enough to catch them perform alongside Gold Panda and Caribou at Corsica Studios back in 2010 and they fully justified their place on the billing.

“Purple Stuff” originally featured as a B Side on the band”s second and final release Head Anthem and caught the celebrated ears of Four Tet and Caribou among others. How The Other Half Lives label boss ZNTN also saw something in the track, electing to give “Purple Stuff” the dust down and remaster treatment and release the jagged, low slung slab of pulsating slow jack along with some rather fine remixes from Juno Plus favourites Timothy J Fairplay and Photonz along with the latter’s Portuguese compatriots Zoda Cade.

Weatherall’s studio handyman Fairplay actually delivered two remixes and it’s the second digital only Mondo Remix – which the producer aired in his recent mix for us – that How The Other Half Lives have kindly offered up as a free download. While Fairplay’s first revision takes “Purple Stuff” into the realm of glistening forest techno, the Mondo Remix sounds more liked a decaying, rusted version of the source material.

How The Other Half Lives will release Purple Stuff by Hounds of Hate on purple 12″ on September 10.