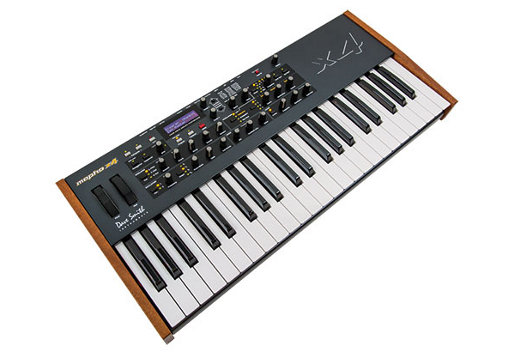 Dave Smith Instruments have just announced details of the latest addition to their family of analogue gear, the Mopho x4.

Based on the same voice architecture and fully analogue signal path as the popular Mopho unit and Mopho keyboard, the Mopho x4 is a four voice polyphonic synthesiser, each of which is comprised of two analogue oscillators, two sub octave generators, selectable 2- or 4-pole Curtis low-pass filter, three 5-stage envelope generators, four LFOs, a re-latchable arpeggiator and a 16 x 4 step sequencer. Like the original Mopho keyboard, the x4 has a wide variety of controls which allow every parameter to be fully editable from the front panel.

Like the Mopho keyboard, the x4 also has expandable polyphony via its Poly Chain port, allowing the Mopho, Tetra and Prophet ’08 to be connected, allowing a theoretical 16 voices to be played from its 44-note semi-weighted keyboard, which features aftertouch and velocity sensitivity, all of which is demonstrated by Smith himself in the video below.

Most exciting is perhaps the price, which is recommended at a reasonable US$1299 – which puts it in the same price range as Moog’s Little Phatty, which is of course only a monosynth. The unit is supposedly available now and shipping to retailers, so keep an eye on Juno Plus for a review when it arrives.