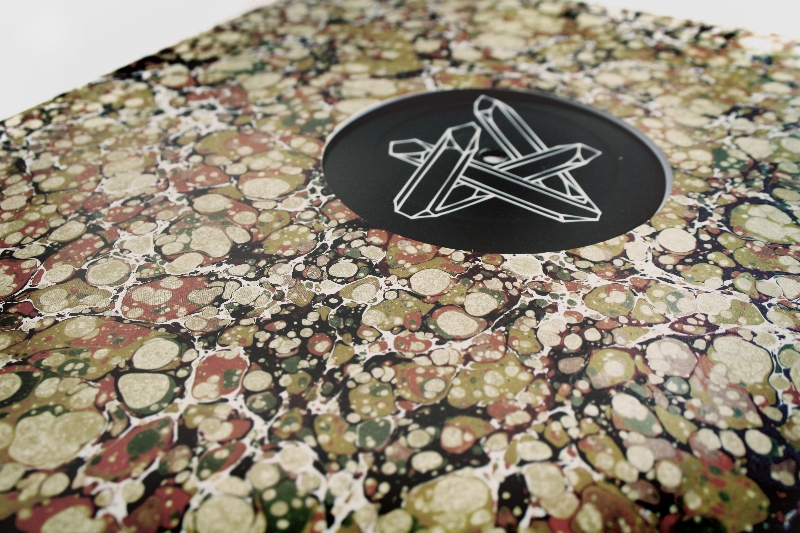 If July is the month when the vinyl releases traditionally quietly drop off as label bosses loll about under the Adriatic sun, it certainly wasn’t showing in the artwork department.

Perhaps this is because while the established names take a break, the upstarts keep their heads diligently down, and there were a significant number of fledgling labels also made the list this month: Ikonika’s long awaited I Make Lists EP arrived via her own Hum & Buzz imprint with a sleeve design that matched the colour-streaked, 23rd century imagery her music provokes; Powell’s Body Music was housed in a lime green inner sleeve with a black outer and slick font, and the Rrose & Bob Ostertag 12″ on Eaux felt like you were holding an antique x-ray in your hands. The sleeve of Timothy J Fairplay’s 12″ for Emotional Response was as eerily beguiling as the Frenchman’s soundtracky synthersiser house, while the debut cut on Sullen Tone showcased a clear and original visual direction from the shadowy Old Apparatus collective. And if it was bikinis, dildos and machine guns you were after, look no further than General Zod & Courgarman’s When Sally Met Mandingo plate on Golden Hole.

It wasn’t all about the new kids on the block; Golf Channel can generally be relied on for nice and bold artwork (when they’re not teasing us with blink-and-you’ll-miss-’em white labels that is) and this month they dropped two wildly different records in look and sound.  Spike’s New Germany featured an American map straight out of The Man In The High Castle, while Juju & Jordash’s JEWSEX 12″ had a cover that will no doubt confound and shock many. We’ve elected to opt for the Spike cover in this list but you can check the Jewsex cover here.

Hivern Disc were back on the podium (we had to get at least one Olympic metaphor in here), with the lovely speckled artwork that adorned the first instalment in their trilogy of releases from Aster, while ace London imprint Blackest Ever Black gave their Flaming Tunes reissue a new sleeve featuring brilliant archival photography that matched the somewhat dusty, long-forgotten and under-appreciated nature of the music itself. Meanwhile the iconic derelict Michigan Central Station building in Detroit dominated the cover of D’Marc Cantu’s A New World, a reflection of the Michigan resident’s attempts to covney his love for the Motor City on wax. And arriving just in the nick of time to make our list was the excellent 122BPM vinyl compilation curated by Still Music’s Jerome Derradji, which perked up the office with a vibrant ode to classic 1980s dance LPs.