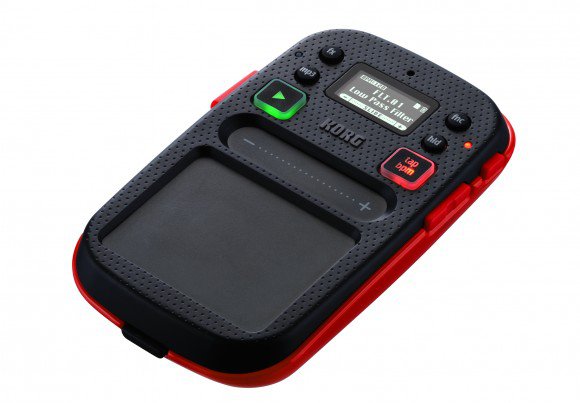 The next chapter in the story of one of the world’s most popular effects units has arrived in the shape of Korg’s Mini Kaoss Pad 2. So how does the little brother of the Kaoss Pad 3 fare?

At first glance this dynamic effect processor looks almost identical to the Mini Kaossillator 2, featured on Juno Plus not too long ago; it has the same compact dimensions and ergonomic hand-held design. It is powered by either a pair of AA batteries or an optional DC 4.5 V adapter, and its petite display is designed using OEL (Organic Electroluminescent) technology, giving a higher ratio of contrast than LED, which makes it easier to see in a dark venue. The control system also has similarities with the Kaossillator 2; the signature X-Y pad takes up half of the effects unit, although there’s a zoned touch strip where you would find a knob on the Kaossillator 2. There is a built-in media player and mic input as well as the ability to record, in real time, your entire performance. With the Koassilator being a performance synth, the similarities end here, because under the hood of this hand-held box is a powerful effects unit with 100 ready-to-use presets ready to help enhance your source sound or wrestle it out of recognition.

Although you can use the Mini Kaoss Pad 2 for any number of scenarios – such as in a studio to add effects in post production or in a live set up – this machine really comes into its own when being used in a DJ set. The pre-programmed effects are geared towards DJs, with various filter configurations, modulation, delay, LFO, reverb, loopers, vocoders and simple synths all controlled using the X-Y pad on the front panel. In fact, all editing of the parameters on all presets is done using the pad on the fly – it simply isn’t possible to, say, re-tweak the amount of resonance being applied to a filter or the amount of feedback coming from one of the delays. But there is, however, a broad choice of effects to use, and it’s possible to save three of your favourites for instant recall using the mini FX button in the top right corner.

The sounds themselves vary greatly but the quality is high for such a small machine. The output is via a single stereo mini jack, which appears devoid of any unwanted hiss, and the onboard media player, a new feature to the Kaoss Pad family, which allows you to launch both mp3 and 16 bit .wav file types for high quality playback. The built-in mic on the front panel can be used in conjunction with the onboard effects, but perhaps a more realistic option for this is the stereo mini jack line input next to the output socket, which allows you to hook up any external source to the Mini Kaoss Pad 2’s myriad of effects. 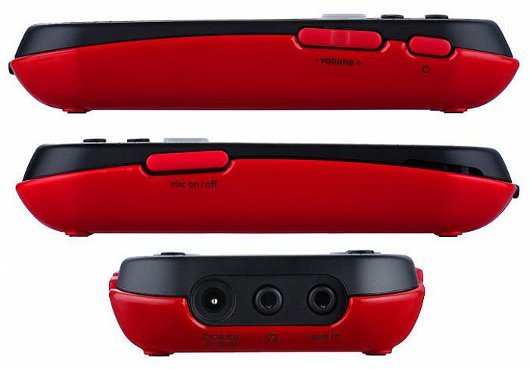 If you have a formatted micro SD card fitted in the designated slot then it’s possible to browse and play your own music through the unit; simply press the mp3 button on the front panel and use the zoned slider control to navigate, browse and select your own tracks. Hit the mp3 button again to turn the slider into a pitch control, and again to set a cue point, which opens up the possibility of using the Mini Kaoss Pad 2 for beatmatching purposes. If you hit the function button, the first option to pop up gives you the ability to cross mix between the on board sound and any source plugged into the line input. In theory, this creates the option of putting two machines together as a mini DJ station (albeit with no simple way of monitoring cueing in headphones), or plugging two machines into a mixer and using the pitch and cue possibilities to beat match. With only one machine to work with, this writer had no way of knowing if such a thing is indeed practical, but it’s certainly possible. There is a tap tempo BPM button that blinks away in time with the tempo the FX are timed to; although this is not necessarily the BPM that your music is playing at, you can simply tap in your new tempo or set it using the slide control. Also blinking away in time to the fx tempo is the single transport play button.

The function button not only gives you the option to mix the player with an external source, it also allows the user to change the depth of the FX as a whole, and engage or disengage the FX release function. The FX release is in place to smooth out the sound when you take your finger off the X-Y pad or disengage the handy FX hold button. It doesn’t seem possible to edit the length of this automated FX fade out – this writer felt that the release occurred a little too quickly. The function button also gives you access to the SD card recording capabilities, as well as setting up the connection type and access to a set of utility pages.

Essentially, the Korg Mini Kaoss Pad 2 has taken features from the larger Kaoss Pad 3 and packed them into a small and practical machine that has two magical qualities: durability and flexibility. Pioneer have recently released a new FX unit for DJs called the RMX1000, which has some very impressive features in a box that is also small, although not quite as petite as the Kaoss Pad 2. As it belongs in a different price range (the RMX1000 goes for around £600) there is little point in comparing the two too closely, especially as this version of the Kaoss Pad also has media player technology built in. It’s the sort of small but powerful unit that can be whimsically packed into your gig bag along with your CDs, vinyl or USB sticks to give you the opportunity to enhance your DJ sets and live shows, so you can do what it is that you have set out to do: rock the crowd.