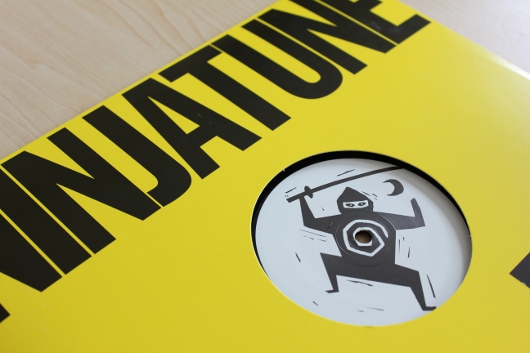 Our selection of the best artwork from June’s releases features more of those records you need two copies of: one for the turntable and one to hang on the wall.

Many of you will feel a pang of nostalgia when inspecting the artwork for Hardcourage, FaltyDL’s second EP for UK imprint Ninja Tune, pictured above. The classic yellow sleeve was last used on a release in 1993, and made for a neat match with the music contained within, which in true FaltyDL looked both forwards and backwards at the same time with classic house samples chopped and rearranged into something utterly of its time.

Other picks for this month followed along similar lines, with the best sleeves providing engaging visual accompaniments to the music contained within. The occult imagery on the debut Jahiliyya Fields double 12″ for L.I.E.S. set the tone for the hypnotic assembly of drones that pervaded the six track set; equally, what else would you want adorning a Beyond The Wizard Sleeve record other than some hazy, out of focus psychedelic pixels of colours?

And then there were some releases with artwork we loved simply for their notable intricacies, such as the embossed centre logo on the Sounds From Brussels 12″ from LiveJam affiliate EMG and the unsurprisingly obsessive attention to detail paid to the latest Heatsick release on PAN. Stones Throw’s Bruce Haack Remixes album has complemented by some delicious technicolour photo treatments, R&S eschewed their usual throwback sleeves to give Pariah’s latest EP the soft focus industrial artwork treatment, Secret Circuit’s debut on Internasjonal visually matched his debut on Beats In Space, whilst the stunning archival psychedelic exotica of Other Power from Finnish producer Pekka Airaksinen was gifted some equally trippy artwork.

Darling Farah’s strong sonic identity of a debut album was naturally embellished with a strong, smoky, visual identity, whilst Tri Angle found yet another blurry image in their archives to complement the sounds of their debut release from Howse and UNO continued to impress us with the detailed visual landscape that covered their 12″ from Fur.