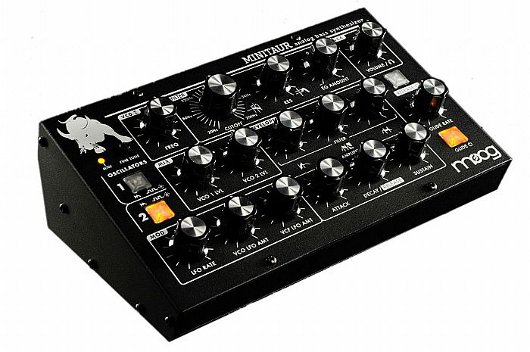 Moog, the daddy of analogue synthesis, has decided to focus on the bottom line: a bass synth modelled on the sound of the Taurus Three bass pedals, the Moog Minitaur.

Every card carrying electronic music fan has heard of the Moog brand, and on a wider scale, just about everyone who listens to music has probably heard its sound, knowingly or unknowingly. Moog is the father of analogue synthesis and the venerable company’s range of mini analogue synths have been putting keyboard players in the spotlight since the late 1960s. In 1974 they unleashed the first Taurus bass pedals and this, the Minitaur, uses the same engine.

The first thing that impressed this writer about this unit was its size. It’s slanted face and rubberized feet will take up 216mm x 76mm x 140mm of desk space, and if you want to throw it in your hand luggage, it weighs just 1.2kg: perfect. With two oscillators assignable to either saw tooth or square wave at the touch of a button, it’s fair to say that full analogue bass power in portable form has arrived. Its seventeen knobs are dedicated to the task; each one is assigned, with no need for tricky or time-consuming button configurations or pages to step through. In the moment, hands-on manipulation of your synth bass lines is fully possible here. The muscles of this machine are housed within a sturdy black metal case, designed for protection against the rigours of modern travel. All of the knobs have a familiar Moog-like look about them, and they move smoothly and freely with no resistance, and apart from the two wave form selection buttons there are only two other back-lit yellow buttons to toggle the amplifier decay into release and turn the glide function on or off. 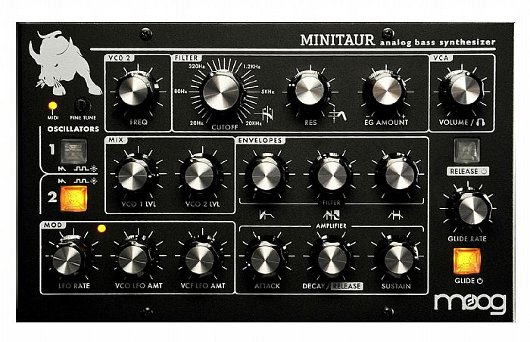 First and foremost is the famous Moog filter, which reaches all the way from a trouser-flapping 20Hz up to a dog howling 20KHz. Its smooth and creamy tone retains a full solid low end all the way up. Resonance can be added as would be expected and the slight separation of the sound when the filters are really screaming belies this machine’s Taurus roots. Topping off the filter section is the envelope generator amount knob, which ensures this machine is in keeping with the classic Moog filter configuration. A further three knobs help you get hold of the filter envelope by controlling its attack, release and amount. In traditional Moog fashion the amplifier section is at the bottom and again there are three controls; attack, decay and sustain, with a toggle button turning the decay into release. There is a modulation section to the left which will allow control over the LFO rate, with VCO and VCF amounts tuned by dedicated knobs. Mixing the two oscillators is also as simple as dialling in the amounts that you want, as each one has its own dedicated volume control. In fact one of the more beguiling features of this unit is that it’s possible to get a sine wave by turning both oscillators to zero and raising the resonance value. It takes a bit of experimenting but eventually you can ease those silky sine tones out of this little unit. If you want to thicken your sound then you can tune oscillator two independently of oscillator one to get those big fifth tones or even a pulsing vibrato. On the far right of the face of this unit are the glide rate knobs and a volume control. No surprises here for Moog aficionados.

Around the back is a ¼” audio output and a similar audio input, allowing unbalanced line level use, often needed by people who want to over drive the filter. There are CV inputs for pitch, filter, volume and gate as well asMIDIin; there is also USB MIDI function with a B type connection. The power comes from 12 volts of DC and there is also a 1/8” headphone output jack on the far side next to the main output. 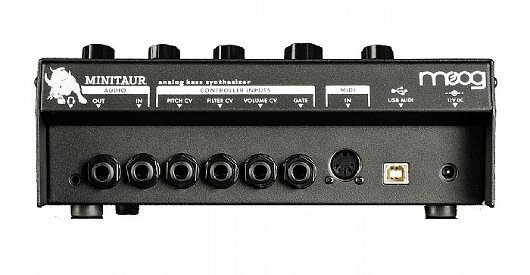 As it stands, the Minitaur bass synth will make the sounds that you allow it to make. As a standalone unit there are no presets or save and recall functions – it’s purely a bass synth. It’s possible to make convincing TB303 type acid bass sounds as well as classic P Funk tones, such as the ones you might find in their 1978 hit “Flashlight”. There is also some useful software in the form of the Minitaur editor librarian that allows you to hook up your physical unit and call up pre-programmed patches or tweak the keyboard tracking and various other ‘under the hood’ functions of the Minitaur. It also allows you to save and recall your own patches, which is a massively useful function if your live show requires relatively quick patch changes. This software is available to registered owners of this unit.

Many synth users are used to versatile bass patches and these full bodied sounds can and often are used for other purposes other than bass. Often players choose bass patches to use as lead sounds or add white noise to them to create percussive and slightly airy tones. However this possibility is limited with the Minitaur as the key range won’t go higher than C4. But then again Moog are presenting this as a bass synth and in some ways, and to its credit, you feel like you want to make more use of the power that has been handed to us, especially as it comes in such a handy size. What Moog have done is put the power and heritage of its bass tones into a small and manageable box and at the same time, retain as much of the Moog function as is humanly possible, putting the power of its classic synth bass sound into our hands.