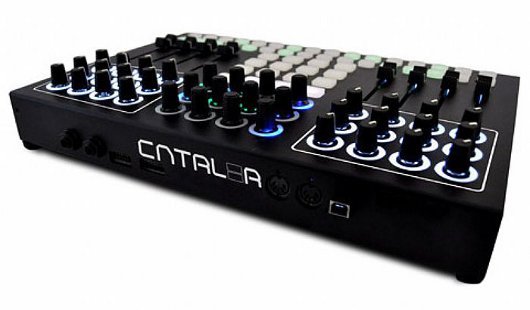 Livid’s new, DJ focused CNTRL:R MIDI controller has everything you’d expect from a company skilled in manufacturing electronics for the live arena, with a few surprises thrown in for good measure.

Livid has always had its roots firmly planted in the world of controllers geared towards live performance. One of its co-founders, Jay Smith, actually designed, performed and toured in a live band across the US with a video controller he had built himself. But for the CNTRL:R they have designed and built an interface with the DJ/producer very much in mind. It claims to be ideally suited to both live performance or DJ sets, and for these two purposes they have provided templates for Native Instruments’ Traktor and Ableton Live; there is also a downloadable piece of software that allows you to create your own MIDI mapping. None of this actually ships in the box, mind you – Livid suggest that if you’re buying this product then you probably have a computer and, more than likely, access to the internet. Fair enough, we say. So all the manuals and downloads and extra bits of software and paperwork live on the Livid Instruments website. The other explanation they give for the unassuming nature of the packaging is that they want to put all the weight of their resources on creating a great product, rather than a fancy, costly box. So far, so fair.

For the design of this controller, Livid sought the advice of mop haired techno legend Richie Hawtin and the artists on the roster of his venerable m_nus imprint. Its lightweight aluminum black casing houses an array of buttons, faders and encoders designed for hands on, spontaneous music production, and it’s small enough to tuck away into a modest backpack. The layout is simple – it looks like a DJ mixer without the cross fader and with added function buttons. The top left section gives us a battery of 12 free moving encoders underlined with four faders. This is the same on the right hand side, making it ideal for those of us familiar with DJ type set-ups. The middle section also has a brace of 12 encoders but this time they’re the push button type, and instead of faders there is a set of 16 padded buttons below, this time hinting at the possibilities available for mapping to production software such as Ableton Live. 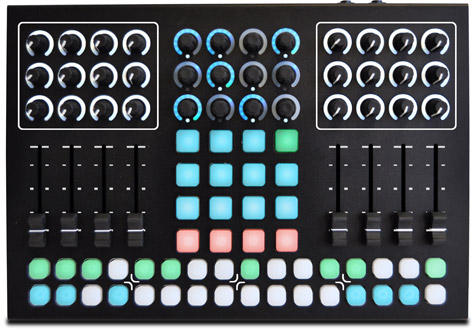 Along the bottom of the controller is a curious bank of 32 buttons that have been sub divided into groups of four. These buttons allow the user to step write drum and synth sequences in Ableton Live; named the DrumStepp:r and SynthStepp:r respectively, the 32 buttons can be used to program sequences as you would on traditional groove boxes. There are two sets of 16 notes for creating spontaneous grooves and sequences, and, in addition to the faders, encoders and buttons,it becomes clear how much control you can get over the software with this relatively small device. With each sound mapped with its own set of controller numbers, it doesn’t take long to start getting creative. And if Ableton Live is not your choice of DAW, you can simply find a template of your choosing online or create your own.

As the controller is geared toward the DJ/producer, there is also a template for Traktor. This takes a little getting used to as the functions aren’t mapped very intuitively for the DJ: they haven’t made use of the mirrored design of the controller and you have to commit a lot of the controls to memory. However, with a bit of tweaking you can create your own map and the software provided does a good job of facilitating this.

All of the buttons are backlit and offer two-way communication with your software. The encoders also utilise light technology, so you can see exactly what configuration a knob is set to, even in dark clubs or stages. The faders give a decent amount of resistance, and the spacing between the buttons is wide enough to ensure you won’t miss-hit a key or two. The encoders are free moving with no resistance – it would have been nice to have a set of step type encoders as it’s easy to mistakenly change a knob setting. There is also quite a bit of travel on the buttons and it causes them to feel a little bit wobbly. There is a click when they are depressed and maybe the amount of travel stops the buttons getting caught under the actual aluminium housing when you are in mid flow.

The CNTRL:R is powered straight from the USB bus and there is a cable (which is admittedly a little short) that ships with the unit. Around the back there are two standard MIDI ports and expansion jacks allowing you to access other devices such as foot controllers, sensors and expression pedals, as well as the ability to integrate with Livid’s own series of DIY type boards for a modular set up. One of the unique elements of Livid as a company is that they offer all the parts and modules for sale separately, allowing you to effectively create your own controller. There are a lot of MIDI controllers out there and it’s hard for companies to make unique machines, because in a lot of ways they are dictated by the software you use them with. However, the added software that has been developed for use with Ableton Live gives this controller and edge over its many competitors.