“Instant, honest rave”: Behind the scenes with Magic Mountain High 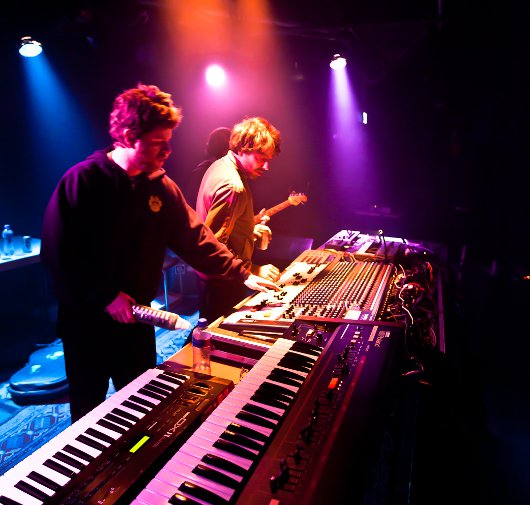 Arguments over what exactly constitutes “live” electronic music are often as circular and dull as the most listless of pre-programmed laptop sets, but David Moufang isn’t in the mood to pull punches: “It’s like taking a piss on people,” says the man better known as veteran of leftfield electronica Move D. “They map their tracks on Ableton and then they crossfade them, and I’ve seen people I really respected pulling this trick. We’re all fed up with this.”

The response, which one might expect to be out of character for a man with such genteel approaches to electronic music, is in answer to the question of whether his latest project, Magic Mountain High, is a direct throw-down to the culture of pre-programmed sets in house and techno. “If they would at least gamble or play strip poker or something it would not be so bad, but they are doing nothing,” he spits. “We want to leave all this behind and strip to the bare necessities and essentials.”

Magic Mountain High is the formation of David with Dutch duo Gal Aner and Jordan Czamanski, aka Juju & Jordash. The main focus of the project is on live, improvised creation, thus far manifesting itself in a stream of live shows and one 12” release. In an age where technology can create serious doubts over how much work is the machine and how much is the human – Theo Parrish made some prescient comments on this very subject in a recent interview with Slices – the MMH mission statement is a fearless refusal to prepare anything before they hit the stage. “We don’t plan or tailor anything,” Jordan proudly states, as I talk to the group ahead of their show in Utrecht later that evening. “For example, tonight we won’t have time for a soundcheck so it’s completely improvised.”

“Usually it’s nice to have some kind of soundcheck and then naturally everyone sets their levels,” explains David. “By doing the soundcheck we’re making a first piece so to speak, which we can let rest until we’re on and then we can pick it up again which really helps to enter. The last one or two shows we had to start from nothing!” 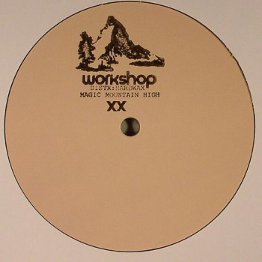 “To be honest I would be embarrassed to repeat something from a previous show,” adds Jordan. “If that happens I feel kind of shit. It’s more like trying to be a bit different each show.” When you consider that the set-up the trio play with consists of an ever-changing collection of drum machines, synths, effects units and computers, there really isn’t much scope for any preordained elements to their performance. Yet still, it’s quite remarkable to compare the recordings of different shows MMH have played so far and find no common threads.

“I guess improvisation is the concept,” explains Gal. “I think it’s pretty interesting to do improvisations for dance music – it’s not very common. It’s even looser than jazz, because in jazz usually there are themes, and here we’re in a club, playing and seeing where things go with no structure whatsoever but still needing to make the people dance. It’s not like sitting on the floor playing ambient which would be very easy. It’s more of a challenge.”

There’s a stripped-down quality to the music they conjure up in these strung out performances, with the elements sitting starkly in the mix; all trappings of a method that can’t hide behind production trickery. The drum patterns are dynamic and yet clean, while the melodic elements flutter with the charm of being played by hand, and the end result feels like the kind of minimalism that typified the earliest forms of house music circa 1984 (or proto house as some might call it).

“There’s something good about it; some instant, honest rave,” muses David. “The music might be anything, but it used to be anything in those days. The main ingredients were the right kind of sounds and a crazy wicked approach. I think we can offer that.” It’s an interesting departure when you consider the music David, Gal and Jordan are known for respectively. The name Move D has been associated with many things in the past, from early techno to ambient soundscapes, and now settled into an organic flavour of house music. Juju & Jordash meanwhile is a byword for a far-flung realm of what house music might be were it a direct extension of jazz. Occasionally shocking, often unsettling, but always fascinating, the JJ&J sound is often a dense and complex beast, a far cry from the instantaneous happenings in Magic Mountain High.

You might be forgiven for thinking that all this talk of live improvisation and equipment geekery could lead to listless clubbers with short attention spans treating the set as a chance to pop outside for a cigarette or get a drink from the bar, but the reaction from the crowd thus far has been largely positive. “I feel like I can’t look at the crowd most of the time,” David explains, “and half way through our set I’m thinking ‘oh jesus, everybody will be gone!’, and so far it hasn’t happened really. Last time in Madrid we started in a really empty room and by the end of our set it was really pumping.” 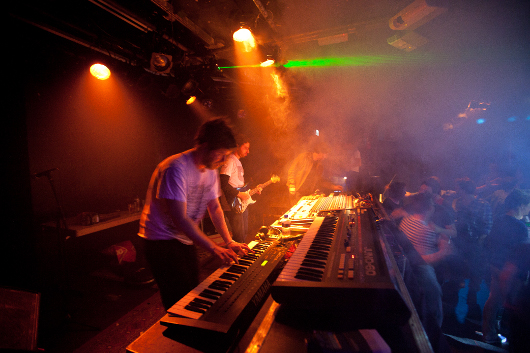 “It helps when you see someone on stage performing with something that looks like an instrument,” adds Gal. In all honesty the concept of the three men tinkering with synths and boxes on stage led to a stark mental image of a static crowd stroking their chins and noting the subtle nuances, perhaps chuckling at the inevitable accidents and nodding approvingly for the moments of brilliance (of which there are plenty). “It’s not like that at all,” counters Jordan. “The crowds are dancing like crazy. Maybe at the beginning there’s a few nerds looking at the gear, but really it’s super musical in the sense that we have to play every note. It’s not just live programming!”

“I think people can feel this tension and feeling of being lost,” David adds, referring to those moments when the thread of the music gets stuck in a rut of some kind, “but when it happens and then we hit on something, they can also feel the relief of something coming in and resolving.” It’s not long that MMH has been in formation. After some time spent jamming at David’s studio in Heidelberg, having met at a festival in 2009, the first live performance the trio made was at Dekmantel’s Hedkabinet festival in late 2010, but it was the following year when what Gal describes as “a cosmic coincidence” intervened to ensure the project went further.

David happened to see Gal and Jordan performing a live soundtrack to Der Golem, a series of films about Judaism in Amsterdam. Following that David was asked independently to perform a soundtrack for the same film by a festival in Mannheim, and the three decided to do the performance together. Since then the official formation of MMH has been witnessed at gigs across Europe, and now the group are also turning their attention to recorded output. “On the one hand we’re thinking should we only release live recordings in the future,” David explains, “but also on the other hand we want to go back to the studio to do stuff that we wouldn’t really do live. More experimental, more ambient, more musical. We have this downtempo crazy shit already that’s waiting for a release as well.” 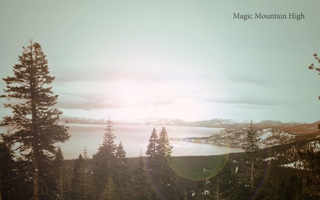 So far all the world has been able to experience of MMH outside of the dance has been one lauded 12” on Workshop. It’s a logical home for the primal yet forward-thinking tracks, fitting into the label’s unique canon of leftfield house music with ease, but the live sets do suggest that there could be many sides to the MMH sound given the time to grow and evolve. As the improvisational mandate intones, the live performance has taken precedent for Magic Mountain High, perhaps a convenience for busy artists with their own independent careers. “After the first performance yes, we have been focused on the live set,” David explains, “but before that we were having a great time in the studio as well, and we will have a great time in the studio again.”

Anyone who has participated in any kind of unplanned jam session with other musicians will appreciate the ease with which time can float by on the same repeated refrain, whether it be a riff on a guitar or a particular drum machine pattern. When on stage, there’s no chance to indulge and stay in one place for too long, but away from a hungry dancefloor there’s no limit to how long a jam can go on for.

“We have a lot of shit to master in the studio,” David reveals. “One jam is likely to be 45 minutes long, and then there are always one or two tracks in there we can edit down and think about people to give them to.” This was the way the Workshop 12” came into being, and in keeping with the MMH philosophy future material looks set to come together in this way. One thing is for certain though; David, Gal and Jordan will keep the verbal communication to a minimum. “There’s nothing that we talk about, before or during the performance,” David explains. “Afterwards we have an opinion, but it’s not really something we can discuss. The great freedom is that we’re not trying to recreate or fulfil something that we have thought of. We’re just being surprised by shit as it happens.”

“David records every show and we listen to it afterwards,” says Jordan, “and I guess each one of us judges alone… in bed… crying.”