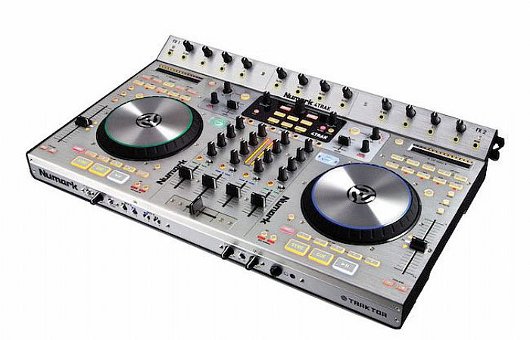 DJ equipment manufacturers Numark have partnered up with Native Instruments to build the 4Trak, a mixer that provides total access to the functions of Traktor.

The 4Trak is not a small unit; an array of jog wheels, faders, encoders and buttons are set out on a brushed aluminium tray. Its 605mm x 381mm x 89mm dimensions weigh in at a hefty 7.17kg, always a good sign (assuming you don’t have to carry it anywhere). Essentially, Numark have put together a mixer that also serves as a MIDI controller specifically mapped to Traktor. It doesn’t take long to dive into a mixing session because the MIDI element of this controller is neatly designed and very intuitive to use. At the heart of this unit you’ll find four channels of faders, all with gain encoders and three band EQ with switchable cue functions between a computer and analogue line ins – this allows for full integration with an analogue set up. At the bottom is the cross fader, with the cross fade assignment located on the front wall, the slope of which can be tweaked according to taste. Also on the leading wall are the dual headphone outputs; one is for a ¼” jack and the other is for the smaller 1/8” jack just in case you misplace your adapter. 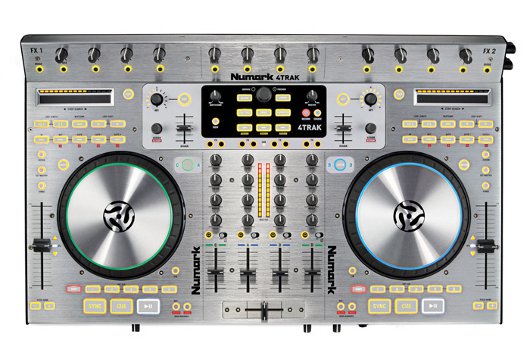 The 4Trak isn’t just a four-channel mixer – it’s also a controller which gives you full access to Traktor’s functionality. This starts with the mouse-less browsing encoder which sits at the top of the unit, directly above the mixer section. Access the file tree and scroll the encoder to find where your music lives, then press the ‘song’ button to find your track and load it onto a deck or click down on the encoder to audition the song, being careful to make sure you stop the auditioning before you put your song in the mix. On one side of the browse section is an encoder to control the booth level and on the other side is an encoder for the master output volume. Directly below you can start and stop the recording of your mix or activate the auto mixing of your tracks. There is also a button for changing the view of the Traktor page along with three other MIDI assignable function buttons. Either side of the browse section are the pitch controls which allow you to change the key of your music, along with an extra assignable encoder and fader. The two jog wheel platters are a direct mirror of each other, save for the source assignment. Numark’s own strip search and needle drop functions sit at the very top with tap tempo and an array of loop functions, including a handy loop shift control. With the pitch faders located next to the jog wheel for ease of use and hot cue buttons, playback transport and jog wheel function assign buttons all within easy reach, a lot of functionality has been packed into a fairly simple layout. There is also an FX bridge which slots into the back to allow access to Traktor’s array of FX parameters and dedicated filter encoders designed for use with Traktor’s Numark Edition 2 (which comes free with this unit). 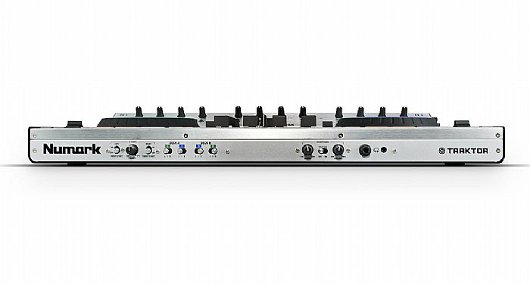 Setting up the 4Trak and getting it assimilated with Traktor is a relatively simple process. There are included drivers to install for the Numark unit first, and there are instructions on how to navigate Traktor’s preferences to get the controller talking to the software. Once this process is complete you are ready to get mixing, and although you have to keep an eye on your computer screen during browsing and auditioning, it is possible to achieve a fair amount of heads-up mixing. The ultra fast MIDI makes the feel of all the knobs, buttons and faders very steady and solid. Similarly, Numark have worked closely with Traktor’s software designers to get a pleasing feel out of the jog wheel as well, with the ability to use them in scratch mode or simply to jog your music into time to tighten your mixes. The pitch faders have a satisfying amount of resistance on them and their range is fully editable from the controller itself. Although the channel faders are fairly unremarkable, they work well and all Numark have notched the encoders at the half way point where it is beneficial to do so, meaning there will be no second guessing whether the mix is rolling off a bit of bottom end by accident or not. Switching channels between line and PC actually clears the music from the Traktor deck, which is a little disconcerting because it’s not out of the realms of impossibility that it could happen by accident mid-mix, leaving your dance floor in complete sudden silence! Most of the 4Trak’s encoders, buttons and faders are MIDI assignable in a variety of software packages except for those in the mixer section of the unit, for obvious reasons. Around the back, Numark’s power their unit with a 12V DC adapter, with balanced XLRs or unbalanced RCAs for master output. The booth is also connected using standard RCAs along with all the analogue channel inputs, all completely standard. It is possible to connect a microphone to either channel C or D, or both, using a ¼” jack and there is also a grounding terminal for your analogue turntables.

There are other four deck mixer/controllers on the market from the likes of Avid, American Audio and, most notably, Allen & Heath, to name a few. Even though this unit is cheaper than some of its competitors and the components are of a certain quality, it boasts features that give it an edge; Numark’s attention to detail in areas like the feel of the jog wheels stands out, for example, and ensures this mixer allows DJs to create stand out sets on the fly without having to keep their heads buried in a laptop.