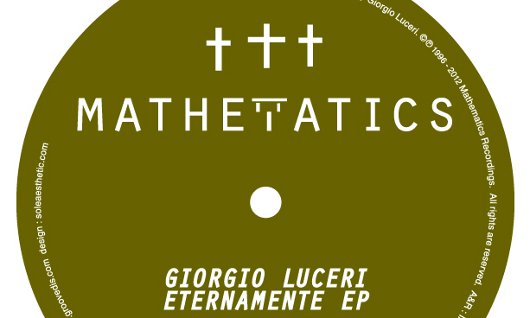 Luceri, who has previously released on Jacques Renault and Marcos Cabral’s On The Prowl imprint among others, posted clips to all three tracks on his Soundcloud page this week (check them out below).

The near 10-minute opening track “Les Verres Du Bar” is an obvious highlight, with the junkyard percussion and raw house bump offset by a jazzy melody. Of the two B-Side offerings, it’s “Eternamente” that impresses us most, with the sumptuous two minute Bocca Grande-esque piano salvo that opens the track one of the most spine-tingling introductions we’ve heard in a long time.

Mathematics will release the Eternamente EP by Giorgio Luceri on February 25 on 12″ and digital formats.

A1. Les Verres Du Bar
B1. Less Business
B2. Eternamente