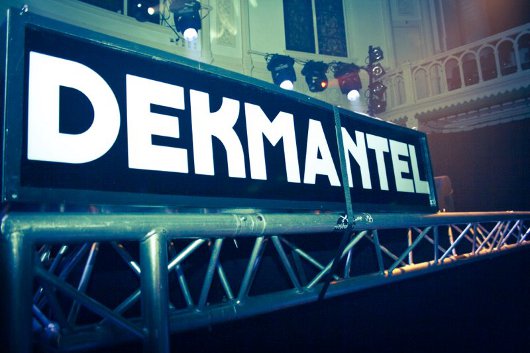 Ask any house music lover what record label comes to mind when they think of Amsterdam and you’ll invariably hear two words in reply: Rush Hour. Yet a brief glance beyond the presence of one of Europe’s most revered electronic music empires reveals a city bubbling with talent; it’s here you’ll find the headquarters of techno specialists Delsin and M>O>S, hip-hop, funk and boogie influenced labels such as Kindred Spirits, and Dekmantel, the label and party run by Thomas Martojo and Casper Tielrooij.

The two friends cut their teeth hosting parties in their hometown of The Hague before moving to Amsterdam in 2007. The early Dekmantel parties are credited by Tom Trago – a Rush Hour mainstay and considerable authority on the city’s nightlife – with reinvigorating a local scene that was threatening to become stagnant in the mid 2000s. Respect for the label runs beyond lip service – Trago released a track entitled “Dekmantel Anthem” in 2010, while another one of the city’s best loved producers, San Proper, sports a Dekmantel tattoo on his arm in permanently inked homage.

Dekmantel parties are now among the finest on offer in Holland, and their label of the same name is celebrating its fifth anniversary in 2012. The party’s reputation has grown to the point where, at last year’s Amsterdam Dance Event, they hosted two of the biggest events of the weekend, one with the Berlin-based Ostgut Ton stable and a more Detroit-leaning affair featuring Theo Parrish and Kyle Hall. Rush Hour, by way of comparison, put on a considerably more low key event to promote the launch of their Amsterdam All-Stars compilation. So how did Dekmantel become such a key part of the city’s house and techno culture?

“In the past two years I think we’ve matured musically, and our interests have become much broader,” explains Thomas. The early Dekmantel parties had a strong focus on the classic strains of Detroit and Chicago electronic music, styles that are now being revisited with fervour by a younger generation of producers and party goers. “We were all around 20 years old,” recalls Casper. “We discovered all that music for the first time and it really took off as it wasn’t really represented back then in the clubs in Amsterdam.”

Thomas also says diversity has been a key element: “Most parties are strongly connected to just one musical niche or genre. With our parties we can have dark and banging techno one night, and warm and soulful disco and deep house the next. We’ve also done UK bass nights, and we’ve put on concerts with bands. It all comes down to whether if fits our own quality criteria and, thankfully, visitors have accepted the fact our line ups can go into all directions.”

Thomas is also quick to acknowledge the close-knit nature of Amsterdam’s music scene when discussing Dekmantel’s rise. “Amsterdam is a small place but I think we have a healthy music scene right now,” he says. “There are people here doing tremendous things and there are tons of quality parties to choose from every weekend. Most people know each other pretty well.” 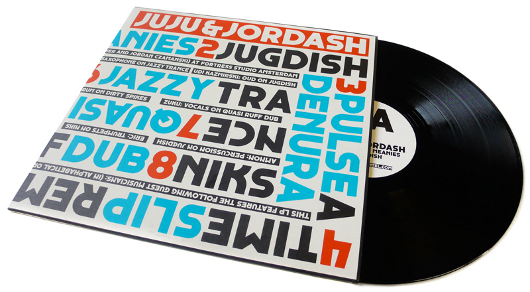 The first Dekmantel party in Amsterdam took place in 2007, and featured DJ sets from the aforementioned San Proper and fellow hirsute Dutchman Aardvarck. Casper and Thomas agree it remains the best party they’ve ever done. “The thing we achieved that night, and it really helped, is that we had a big group of friends who came along to support us. And to this day they still show up to all our parties, no matter what, no matter how deep or dark the music is gonna be.” The Dekmantel sound system quickly took off, and before long Thomas and Casper found their services in demand not only in Amsterdam but across Holland. “It got to the stage where we were playing 10 or 20 gigs a month – that was about two years ago, and since then it hasn’t really slowed down,” explains Casper.

When pressed on the most memorable parties to date, Capser suggests relatively recent events with big names such as Larry Heard, the Ostgut Ton stable and Nicolas Jaar, before adding: “I also consider the first parties during early days as absolute highlights. Those were much smaller, mostly 200 capacity venues, sometimes at illegal spots without permits … they were incredibly intense.” Thomas recalls an equally memorable party with Rush Hour founder Antal: “There was sweat dripping from the ceiling that night; I remember Antal played Model 500 out of a Stevie Wonder track and the place exploded.”

In 2009 Dekmantel expanded from a party to a record label. The catalyst was a series of encounters with Amsterdam dwelling Israeli duo Juju & Jordash, and a subsequent listening session which unveiled a treasure trove of unsigned tracks. “I knew Juju & Jordash from their 12” on Reggie Dokes’ label,” says Thomas. “I heard they were living in Amsterdam and I was trying to figure out why no-one was really talking about them here. So we invited them to our next party and they came along.”

To return the favour, Juju (real name Gal Aner) and Jordash (aka Jordan Czamanski) invited the Dekmantel brains trust into their Amsterdam studio: “We went in and smoked a bit, and they put on some stuff they had made,” Casper continues. “We were sitting there, listening, and the first track, the second track, the third track, they were all great. That’s when we thought, forget a 12”, let’s put out an album.”

Putting out a long player as the first release on a fledgling electronic music label is a bold move, but the quality of the eight tracks spoke for themselves; here was a label with a keen curatorial eye. The self-titled Juju & Jordash album (which was swiftly followed by a white label 12” featuring two album tracks and a remix of Lerosa) set the tone for a slow-but-steady release schedule. 2010 saw two more releases from Juju & Jordash featuring remixes, outtakes and revisions of album material, including two remixes of “Deep Blue Meanies” by Detroit legend Robert Hood. That year also saw San Proper welcomed in as the next member of the Dekmantel recording stable. Proper, whose tattoos, flowing locks and croaky voice mark him out as something of an Amsterdam icon, released the Sex Drive Rhythm 12” on the label, with the title track a sumptuous, slow burning slice of sleaze-fuelled techno.

Last year saw a reissue of a seminal 12” from Detroit techno producer Terrence Parker, another nod to the sound propelled those early Dekmantel parties (“there were only two or three on Discogs and they were going for silly money, so we got in touch”, Casper explains). Then there was the sublime EP from prolific Ukrainian producer Vakula, which featured one of the most underrated house tracks of 2011, “Picture Of You”. There have also been further releases from Juju & Jordash, now firmly established as the label’s central figures, and their smoky, jazzy take on house and techno has provided a firm grounding for the Dekmantel sound. They’ve also gone on to release music on a slew of highly respected labels including Golf Channel, Philpot, and, somewhat inevitably, Rush Hour. 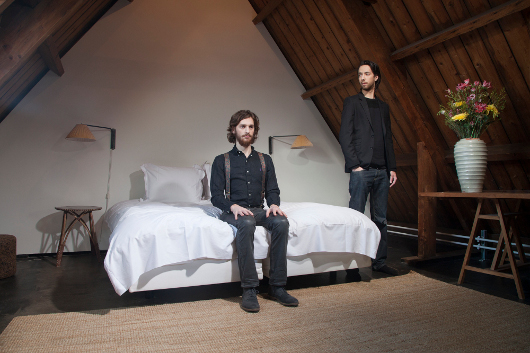 An equally important piece in the Dekmantel jigsaw is its artwork. In an age where many boutique labels are placing as much emphasis on strong design, Dekmantel have carved their own visual niche as well as a sonic one. The instantly recognisable flyers are the work of local designers Marco Sterk (the man behind Rush Hour’s sleeves) and Orpheu de Jong, who also runs the city’s Red Light Radio, an online radio station that brings some sorely needed cultural flair to the city’s generally seedy red light district. “The visual aspect has been one of the key ingredients with everything we’ve done since day one,” Thomas says. The flyer designs have maintained the same style of artwork for four years, with a custom made letter type used to scatter the event information in a puzzle-like pattern. “Instead of doing really wild graphic designs we decided to just do the opposite, which has become quite an original and recognizable trademark in its own right.”

The Dekmantel label releases echo this style, although as the label has grown, de Jong has been given carte blanche to take the original idea and run with it. This has resulted in some stunning designs, with the occasional coloured vinyl release thrown in to please the vinyl fetishists.

Until relatively recently the label has played second fiddle to the party juggernaut, but in 2012 the balance has evened out. To celebrate the label’s fifth anniversary there will be a five part 12” series featuring tracks from a mix of close friends (San Proper, Makam, Awanto 3, Juju & Jordash) and artists who have played Dekmantel parties frequently in the past, such as Fudge Fingas, Lone, Morphosis and Hunee. “The idea was actually born when we celebrated our three year anniversary in Paradiso,” says Thomas. “That night Linkwood and Fudge Fingas played a special one-off live set. It was all non released music – the tracks were especially made for the event. Afterwards they said that we could release whatever we want of it, and Redshape – who also played the same night – liked the idea of contributing too. So we’ve been sitting on most of the music for two years now and with the upcoming five year anniversary we thought that was a good deadline to finally finish the project.”

This year will see the label’s most intense release schedule in its short history. These days Thomas and Casper are in the office five days a week, and have become so busy they’re on the lookout for interns. In addition to the vinyl series there will also be a a fifth anniversary mini-festival taking place March 31-April 1, with the likes of Laurent Garnier, Surgeon, Robert Hood, Todd Terje and Rahaan playing at three parties which truly encapsulate the Dekmantel ethos. There will be another Juju & Jordash album as well as a long player from the mysterious Vedomir and EPs from Makam, San Proper and a remix 12” with Berghain resident Marcel Dettmann, all of which makes for a release schedule that is beginning to rival even the mighty Rush Hour. With such an impressive operation now in full swing, perhaps this little label will become as synonymous with Amsterdam’s music scene as its illustrious counterpart.