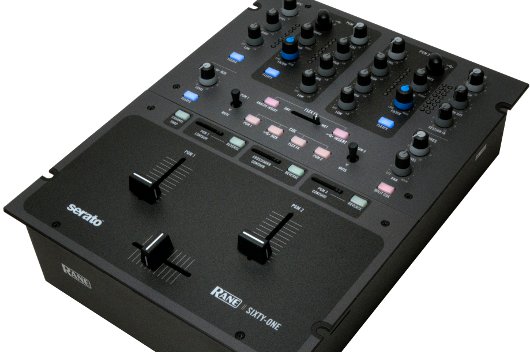 Rane have announced details of a new pair of mixers developed for Serato users, the Sixty-One and Sixty-Two.

Developed primarily as a scratch mixer with only two channels each, the two models are nevertheless packed with the kind of features that will appeal to any user of Serato Scratch Live. Though aimed at digital DJs, the mixers have analogue inputs and hardware filters for those wanting to do things the old fashioned way, but like all mixers in the same market (such as Allen & Heath’s Xone DB4 and Pioneer’s DJM 2000)  has a built in soundcard, as well as controls that automatically map themselves to the host software. Those using other programs will be able to use the mixer thanks to the included ASIO and Core drivers, whilst full USB connectivity allows for a host of playback and record options.

Although both have the same basic functionality, the Sixty-Two adds to it with the inclusion of further hardware effects such as flanger, echo and reverb, a second USB port to share with another DJ and their laptop, and dedicated controls for library, loops, cues and the SP-6 sampler, demonstrated in the video below.

Although they’re featured packed, they don’t come cheap – the Sixty-One is £1299 and the Sixty-Two is £1799 (with the limited edition Shepard Fairey designed Sixty-Two costing £1899), but as far as Serato designed scratch mixers go, you’re not going to find a more comprehensive package, and all models come with a copy of the Serato Scratch Live software, as well as two control vinyls and CDs.

All three models are expected to be released sometime this month, so keep an eye on Rane’s product page on Juno for updates.