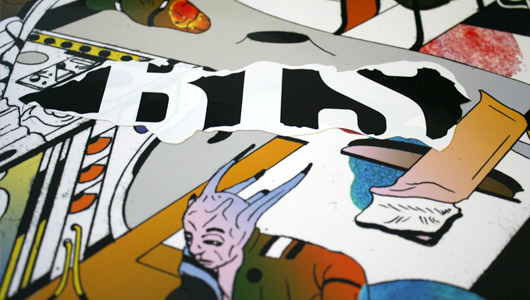 The first few weeks of 2012 have been dominated by news of all manner of new labels popping up across the electronic music spectrum, with a few of the debut releases arriving this week.

Undoubtedly the most high profile release was the debut missive on Hinge Finger, the typically sumptuous looking label endeavour from Mr Trilogy Tapes and Ray Keith’s nephew J Orb. Naturally given the latter’s involvement, you’d be forgiven for expecting some thumping house burners that singe a hole in the YouTube mainframe to populate the first release. However they chose to further highlight the obvious production talents of Workshop associate Madteo, whose four track Bugler Gold Pt 1 oozes the foggy atmosphere of Amber-era Autechre, filtered through the lens of Detroit beatdown. A more considered label debut which sets the tone for subsequent Hinge Finger output.

Elsewhere Andy Blake’s new label In Plain Sight laid out their esoteric house remit with aplomb with the mysterious youngTEE at the helm on Dr Chocolate which demonstrated an auspicious mastery of low slung basslines, infectiously snapping drum rhythms and off kilter sounds for such a previously unheralded producer. The addition of some deliciously camp Teutonic vocal embellishments from youngTEE himself adds that extra hint of character you’d expect from a label overseen by Blake. Speaking of the ex Dissident boss, one of his former label alumni in Milo Smee also presented a new label this week in Power Vacuum, and (yet another) new moniker in Bintus, finally revealing a devstatingly loud mastery of acid techno that’s been growing in the producer for some time – we recommend you check the interview Milo did with JR Seaton for us to get a full lowdown on this project.

Slightly less fresh in the newly established stakes but no less impressive in the musical stakes was the second Beats In Space release, which typically showed a markedly different sonic approach to Paradis’ opening gambit. If you could imagine the results of Gavin Russom subjecting some vintage analogue experiments from Chicken Lips to a spot of his White Wizardry, then your brain might be able to digest the sounds that permeate both sides of Nebula Sphynx. It also gets first prize and a spot at the top for the cover art which comes courtesy of cult graphic novelist Christopher Forgues.

In the murky world of techno, this week’s twelve inches were dominated by the clearly not defunct just yet Sandwell District lot, with the mysterious Rrose following up the monolithic Merchant Of Salt with the slightly less terrifying Artificial Light (1969-1909), a release that simmered with restraint but offered further unerring evidence of this indescribable entity’s craft of sonic structure. Meanwhile, Downwards continued to plunge into the sizeable archives of Karl O’Connor, choosing to reissue Speak To Me, the iconic Brum Techno producer’s debut release as Regis – do prepare yourself for bleeps dredged up from the netherworld and brutal, no-nonsense drums! Special mention to the Bonobo Remix sampler too, which crammed stellar efforts from perennial Juno Plus favourites Machinedrum, Cosmin TRG and FunkinEven on one tangerine dream of a twelve.

The Swamp81 juggernaut rolled back into town with Owen Hargreaves lookalike Mickey Pearce at the helm for the brashly titled Don’t Ask, Don’t Get, utilising the same kind of tough but sparse production as labelmate Boddika on the title track, though it’s the low end that hits you, ripped straight from the dance floor of 2004-era FWD and dragged straight into the present day with contemporary touches. If you like that then you should probably investigate the pre Personality sampler from Hotflush boss Scuba which beguiles as much as it satisfies – not least the overtly festival ready lead track “The Hope” dominated by  a solid breaks backbone and a slightly pitched down vocal engineered for maximum rave hysteria.

Over at Juno Download there was the usual slew of new releases, with what was aptly described as “horizontal techno at its finest” from Italian duo Dadub on Stroboscopic Artefacts our pick of the week’s wavs. What impresses about these guys is their sheer knowledge of sound sculpture and how it works; they have worked on the Dadub project for years, but rather than rush out music so as to gain recognition, they’ve taken their time to develop the project’s output to a fully-formed level. Hats off.

Elsewhere we were yet again left surprised and impressed by the curatorial eye of London label Unknown To The Unknown, who asked library music and soundtrack specialist Jonny Trunk to remix Capracara’s house jam “House Of Dolls”. Trunk left only an echo of the original’s melody and added some acoustic samples to glue the remix together. Propelled by nothing other than a simple kick drum, it’s what you might imagine a music concrete version of house music to sound like.

Amanda Brown was at her industrious best once again, releasing no less than three albums and/or EPs across her Not Not Fun and 100% Silk stable; our pick of the bunch was the Mother Rhythm Earth Memory album from three-piece production outfit Cuticle, whose sub-aquatic brand of house – albeit one that’s initially slowed down to a sticky crawl by water pressure – is infinitely charming. Almost as prolific were Daniel Lopatin and Joel Ford, whose Software imprint dropped two new cuts this week; be sure to check the debut release from L.A. based producer Napolian and in particular the track “New World”, which sounds roughly like like Roule-era Thomas Bangalter played at 33rpm. In other words, very trippy and very good.  Other noteworthy digital releases this week came from Canadian future pop don Jacques Greene, Bullion’s return to R&S 2.0, the aforementioned Bintus EP and Shigeto’s album for Ghostly International.

Over in CD land it was all about that man Regis. Now regarded as something of a doyen for the UK techno community, Karl O’Connor is revered with something approaching religious fervour in some circles. And it’s little wonder; his brutal yet inherently funky and artful strand of techno brought together the worlds on industrial and DIY punk with pummelling 4×4 machine music long before any one else. Downwards began their 3-part series looking back on those halcyon days with the first volume of Complete Recordings. Certified fans won’t bother reading this – it’s buy on sight material – but lovers of contemporary techno looking to trace the genre’s diverse origins should look, listen and learn from one of the undisputed greats.