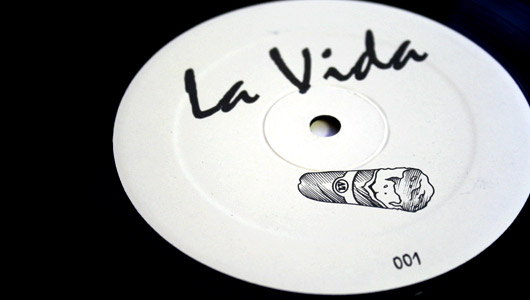 Another week, another new feature – with yours truly at the helm –  hopefully you will appreciate the theme behind Scratching The Surface, which lets us throw the spotlight on some records that slipped under the radar. Of course there was also a shed load of quality new records to occupy our ears with this week.

Undoubtedly top of the list was the debut release on Andres’ new label La Vida, with the big man himself at the controls  for a triplet of trademark jams that veer between the dusty beatdown and the more uptempo house tackle that MCDE sorta wishes he could make.  On a similar tip was Kai Alce’s crop of remixes of the Robert Owens and Larry Heard collab “Sacrifice” with the Simbad embellished UK remix a particular highlight, plenty of brukked beats and squidgey analogue bass on that one!

You will no doubt realise our dedication to the sounds of Gerry Read, and the talented whippersnapper dropped no less than two twelves this week – both of which were indelibly stamped with the production nous of Toronto’s Kevin Mcphee. They both collaborated on the pink twelve “Demolition Man” aka this year’s “A Tender Place” which intriguingly eschewed the one sided twelve inch route to play the same on both sides, and Read also returned to the Fourth Wave label for whom he’s done so much with a rather flossy Kevin McPhee remix of the previously released “Legs” just as good as Read’s own alternate take on “Untitled”. Bring on that album please!

Ask us our favourite recent example of a techno track that feels like you’re being thrown around a rollercoaster, and we’d probably yelp “Rollin” by John Swing. The elusive producer returned this week with four further examples of his trademark rough and raw house and techno deviations for the Relative label which have been cross examined with poise by Aaron Coultate over here.

Ask us what we listen to in order to remember how scared we got when we saw Alien as a ten year old and we’d gulp slightly and say the new Ugandan Methods twelve inch, which is every bit as unforgiving as you’d imagine when Regis pops into the studio with Ancient Methods. Our favourite is undoubtedly the all-out devastation of “She Belongs To Eternity” – an exercise in brutality dressed up as distorted noise and passionless rhythm.

Oh and ask us what gets press release of that week and we’d chuckle and mention the bizarrely scribed words that accompany Objekt’s debut on Hessle Audio before moving on to say how both “Cactus” and “Porcupine” are expert examples of the Berlin-based producer’s talent for crafting sonic weapons, which also demonstrate a new found focus and leanness.

Meanwhile over at Juno Download HQ we were suitably enchanted by the arrival of Blondes’ self titled debut album. Although most tracks on the album are by no means new – having been released in sets of two on vinyl last year – there’s a luxurious feeling to letting all eight tracks seep into your senses on a continual loop. Then there is of course the small matter of the accompanying remixes, which are near perfectly chosen to tease out many different moods from the source material and include some truly excellent efforts from the likes of Andy Stott, Bicep and Rene Hell.

Elsewhere, the Live At Robert Johnson brains trust were so smitten with Maxmillion Dunbar’s “Polo” (which first appeared on 2011’s Max Tracks For World Peace) they hit up the U.S. producer for an extended version to release alongside an edit from Arto Mwambe type Phillip Lauer. The Lapalux album for Brainfeeder arrived in the digital domain, as did Spam Chop’s debut EP on Mimm Recordings.

With recent releases from the likes of industrial post-punk outfits Factory Floor and HTRK, this new release on Blast First Petite comes as something of a change in pace. A 38 minute album in two parts from Yorkshire-born composer and guitarist Michael Chapman, The Resurrection & The Revenge of The Clayton Peacock consists of layers of echoing pulsations, string manipulation and rhythmic neck-knocking to create fresh sounds and effects.

We also saw overdue digital releases for EPs that had been floating around for a while on wax such as Marvin Dash’s effort for Workshop, Andy Blake’s latest set of Cave Paintings, STL’s Things From The Basement locked grooves and Adam Rivet’s EP Ulf Eriksson’s excellent Kontra label.