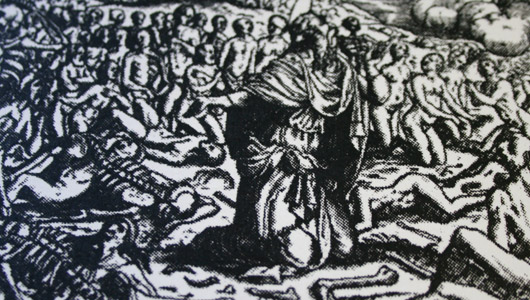 The first of several new and we hope interesting features to be implemented at Juno Plus was rolled out this week with the inaugural monthly best record sleeve roundup. Typically no sooner had we published the feature than an amazingly presented record arrived in the shape of the new Chasing Voices 12″.

You can probably get an idea of how great the screen printed cover for Valley Of The Dry Bones is from the above image, though you really need to hold the sleeve in your hands to fully appreciate it. In true Chasing Voices style the music is immense too, encouraging us to invent the phrase Stottified to describe the immense waves of pressurised sound that build up as the needle creeps across the twelve inch. If this is your first experience of the mysterious New York production enclave, it’s a perfect place to start.

Occupying first place in the ‘commission two remixers that Juno Plus love’ stakes was the fledgling Irish label Apartment. Their second release gathered up a quite excellent production from compatriots and sometime Fine Art Recordings artists TR One in the shape of “Drum Dance”, which naturally featured plenty of analogue rhythms and woozily hypnotic chords. Their efforts were matched entirely by the remixes from Mathematics artist John Heckle and Juju & Jordash – with the former’s all fidgeting machine funk and the latter’s one of their trademark wide screen dub house revisions.

January is not yet over and already Xosar has served real notice of her obvious musical prowess with her Rush Hour debut Ghosthaus following swiftly on from Tropical Cruize. Just as enthralling as the L.I.E.S released debut record, Xosar threw down two spectrally enhanced analogue jams on the plushly presented twelve inch – clear red vinyl in a clear plastic sleeve with insert? Yes please – and they were complemented by two finely judged Legowelt remixes that teased out their dancefloor capabilities.

Another producer whose graced us with some excellent records in a matter of weeks is the enigmatic Los Angeles based GB, who recently dropped a stunningly presented (and naturally quite expensive) Japanese edition of his self released Provider EP that didn’t stick around the Juno warehouse for very long at all. The Gifted & Blessed boss man followed that up with an excellent two track EP for All City this week that matched the A Side’s wonderfully effervescent crunching 808 sounds similar to Fulton’s best moments as Syclops with the more dexterous 80s electro flex of the flip. Keep an eye out for GB’s forthcoming new project The Steoples too.

Should your heart beat loudest to the unforgiving rhythms and sounds of techno then this week my friend was a week you will rejoice.  Spanish label Semantica for example served further notice of their “ever adventurous” status with an Arcanoid 12″ that brought to mind early Ai releases AND a Svreca 12″ that somehow crammed in remixes from Regis, Orphx, Skirt and Silent Servant. If your senses scream more, more, give me more techno then the excellent Mr Rivet returned to Kontra with more examples of his highly charged ware on Amid The Roar (Fengler Remix included) whilst the second installment of Skudge’s curatory series arrived with two slabs of Swedish ruggedness from their compatriot MRSK.

Occupying a space in the musical spectrum all by itself was the latest Shangaan Electro remix EP from Honest Jon’s which featured two unhinged productions from Actress. Clearly inspired by the loose nature of the source material, the WerkHaus enigma dropped some pure Drexciyan funk bliss on “Actress Meets Shangaan A” which was complemented by the even more disjointed nature of the flip side revision. The arrival of a new 12″ from the rarely spotted these days DMZ means we don’t feel reticent about saying “hey, this dubstep record is pretty damn good mate” with Mala and Coki bringing some of that primal dubstep that continues the tradition of the genre’s earliest form.

Over at Juno Download this week, there was a hushed awe as the John Talabot album Fin arrived into the digital domain courtesy of the kind folk at Permanent Vacation. When quizzed about his debut full-length before a Juno Plus party last year, Talabot paused for a minute. “It’s not really house, more electronica – like a proper album,” he finally remarked. It’s an apt description. Fin is clearly rooted in house – and the kind of melody-driven, atmospheric tackle that the Barcelona-based producer excels at – but it’s certainly not a dancefloor-focused set. Rivalling that in the album stakes was Sumach Valentine aka Gonjasufi, who continued to display his singularly unique musical vision on MU ZZ LE, the San Diegan sometime yoga teacher’s first full length LP since the stunning A Sufi & A Killer.

Given his love of all things jazzy, it’s perhaps no surprise to find that the latest Motor City Drum Ensemble label release (via parent company Faces France) is a modern re-boot of fluid jazz-house. “Cosmic Cart” itself is delightful, a spacious, flowing composition that fuses the looseness and organic grooves of jazz with the comforting pulse of high grade deep house. If Moodymann relocated to Moldova and necked copious amounts of tranquilizers, it would probably sound something like this. Other intriguing digital releases came from Young Hunting, Coki and West Norwood Cassette Library, while Detroit ghetto don DJ Assault’s potty-mouthed 2005 release The Lingerie EP was reissued digitally (along with lots of his back catalogue) for those who can’t get enough filth.