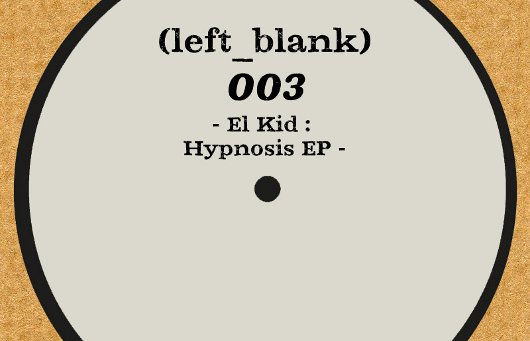 London based label left_blank have kindly offered us an exclusive stream of one of the tracks from their next release, the Hypnosis EP from Bristol producer El Kid.

Entitled “Mud”, it’s one of four tracks on what is another killer EP from left_blank, who have been one of our favourite new labels this year, impressing us with a superb EP from Vessel, and a split single between Visionist and Lorca. El Kid is closely associated with Vessel, both forming part of the Young Echo collective, along with fellow Bristolians Kahn, Zhou and Jabu, and the EP displays the same kind of far reaching ideas as his associates, taking in elements of dubstep, house, and slow-moving, swampy techno. “Mud” falls into the latter category, with its dense, sepia tones coming across as heavily reminiscent of Andy Stott’s claustrophobic material on his recent Modern Love doublepacks, but with the same youthful exuberance of his peers, and also that of the excellent BNJMN albums on Rush Hour this year.

The Hypnosis EP will be released on vinyl and digital formats on November 28, and also includes a remix from Hyperdub associate Walton.