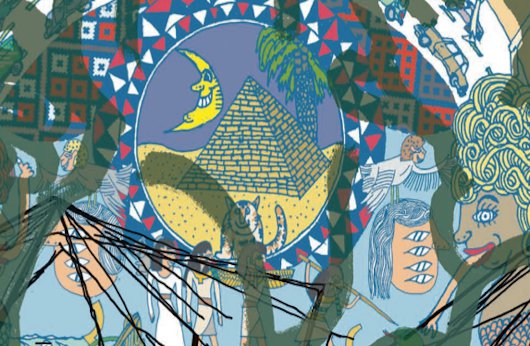 The two track EP will be released on limited 10″ vinyl on November 25, with Montreal-based design collective Seripop providing the artwork you can see above. A-Side track “Old Black” is a cover of drone pioneers Earth, with Egyptrixx taking the glacial guitars and mournful cello of the original and dousing it in an altogether denser, more electronic sheen.Ohbijou adds some vocal layers, and there is a suitably woozy accompanying video directed by Berlin-based studio Datdatdat (who also provided the clip for Egyptrixx’s “Start from the Beginning”). On the flip, “Hiawath” is initially a more raucous affair, with tearing synths and clipped beats, before it drops back into a deeply atmospheric, ethereal outro.

A. Old Black
B. Hiawatha