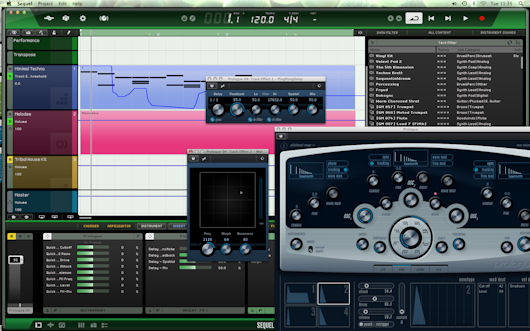 Any one who’s recently viewed the Steinberg Sequel Three promotional video will agree that the whole affair (incorporating a love story within a sequencer commercial) is a wee bit far fetched. However, we won’t let this cloud our judgment of a product that has been described as the Garage Band of Steinberg’s range.

For those unfamiliar with the Sequel, it has been on the market since 2007 and is an entry level sequencer package bred from Cubase technology, designed to be an uncomplicated way of entering the confusing world of music production. It’s essentially a linear type one screen DAW that splits the workspace into three working environments, consisting of a main arrangement window, with a top right browser section which displays factory and user content with intuitive browsing facilities. This can be collapsed and replaced with the master out control room, which has room for a chain of three effects plus a built-in filter and volume maximizer. The bottom section of the screen houses the multi zone view, which can be used to control a number of parts of the program including the mixer (fully automated) and effects, step sequencer or patten based workflows and beat page plus audio set-up.

Included in the package is the Groove Agent One VSTi virtual drummer, a mainstay in the Steinberg stable since 2003. You’ll not find any of the newer fancy features available in the module’s third incarnation, but it’s got some great kits and samples which you can tweak to make your own. It caters for a variety of playing styles, which you can get stuck into with the 16 sample pads, keyboard or with MIDI. Then there’s Halion Sonic SE, the stripped version of Steinberg’s flagship VST workstation which features 16-part multi-timbral mode, 900 production-ready sounds and instruments from Halion proper, plus acoustic instruments and contemporary synthesizers which you don’t need a PHD to operate. Prologue is the icing on the cake in the form of a three oscillator virtual analogue synthesizer, which has two LFOs with four ADSR envelope generators. It has its own modulation matrix so that you ease yourself gently into the happy world of sound design.

While we’re on the subject of VST instruments, it’s worth noting that Sequel now has support for VST 3 -meaning you can use your favorite plug-ins and effects in conjunction with the software. We get the general vibe that the best way to use Sequel is to take advantage of the mass of content (i.e legions of audio files, MIDI loops, instrument and effects sounds, audio track presets and pattern banks), all of which can be edited or manipulated to make something that’s far removed from being “off the shelf”. There’s also additional content that can be purchased covering styles such as minimal, progressive, world music styles and everything in between.

The workflow is solid too – just double click on the sequencer arrangement window and the floating dialogue box gives you all the options you need to configure your initial set-up: after that all is pretty self-explanitary. Even if you have no prior sequencer knowledge you’ll soon be arranging blocks of information from left to right, and you can draw in the automation for almost every major parameter, including the basics of track volume and pan, through to EQ and effects inserts, right up to the inner working intricacies of your VST instruments.  It also features AudioWarp based around the élastique Pro engine, which’ll handle all of your time-stretching and pitch-shifting needs. If you’re not quite ready to bite the bullet and commit outright to forking out for the full Cubase package, why not give this a go as you can always open projects on Cubase machines for more advanced tweaking. [Find out more at Juno]