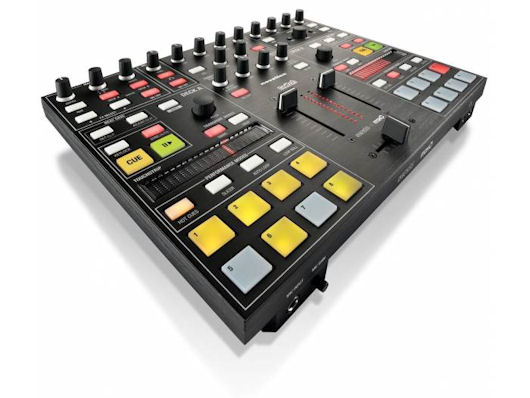 In a world where DJ controller technology is governed by the speed at which the software systems evolve, an inevitable stalemate is reached whereby the market floods with legions of perfectly plausible units which do essentially the same thing.

Recently, however, we have witnessed two impressive steps forward. First was a significantly updated version of Serrato’s Itch software in the form of 2.0. Now we see the release of Novation’s eagerly anticipated Twitch controller, which attempts to revolutionize the way that we cue and manipulate audio playback.

The Twitch is a USB controller optimized for Itch, although it is also rapidly finding fame with Traktor fans due to the official .TSI file and included labeled plastic overlay. A quick pre-test inspection reveals that it’s well bolted together, with a thick metal faceplate (presumably brushed aluminum) that we’d hazard a guess will channel any extreme shock or force down through the 2cm catamaran style rubber tipped feet/legs. It is logically spaced out – at first glance nothing ground breaking, until you notice the absence of one of the key components on a contemporary player/mixer style DJ console: the jog wheels.

Instead, Novation have implemented an innovative touch strip system – a 10cm, touch sensitive, 19-step illuminated strip which has been modeled on traditional platter performance and can be used for scratching, nudging or swiping adjustments to your mix or loop length and needle drops. This essentially means you can jump to any point in the track by putting your finger on the strip and it’ll correspond to the exact place in the waveform. This technology was first seen on Pioneer systems (but who knows who started developing it initially). The next thing you’ll notice are the rotary-style pitch encoders which do away with the traditional linear Technics-esque sliders, and can be used initially for standard pitch adjustment maneuvers or coarse adjustments when depressed. 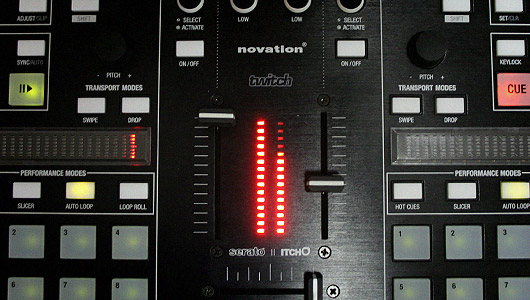 While we’re on the subject of positioning and layout, the top left side player houses the master effects module, which can be routed to either deck A/B main mix or aux/mic. The effects available within Itch 2.0 consist of flanger, phaser, high/low pass filter, crusher, echo, tremolo, repeater, braker, reverb and delay, which come with up to five modulating parameters controlled by a wet/dry depth knob, and a pair of step encoders with push action. In terms of sound quality, they certainly give the Traktor effects (or indeed many DSP effects) a run for their money. The other side of the surface is mirrored by the master output controls which are for headphone level and mix, and the all-important booth level and independent master knobs, which feel rock solid as far as mounting is concerned with a non slip finish.

These sit above the scroll (decent sized encoder) and browse and load controls which are titled area, view and load, and successfully eliminate the need to touch the mouse during operation. Moving downwards, on the remaining area of each side of the controller are the deck controls. The way Itch works is by aligning a series of markers which represent beats on the waveform display which are used for track and effects sync. On the Twitch you can jam with the positioning of these grids in real-time using the Beat Grid section, which comprises a set/clear key plus an adjust/slip (the latter function on both being shift-activated). These can be moved on the fly by swiping the touch strip. You’re then free to use the below keylock and sync controls, which illuminate in pink on the console and can be broken from sync either using the buttons or by nudging the touchstrip, located in close proximity with just the play and cue rubberized buttons separating. 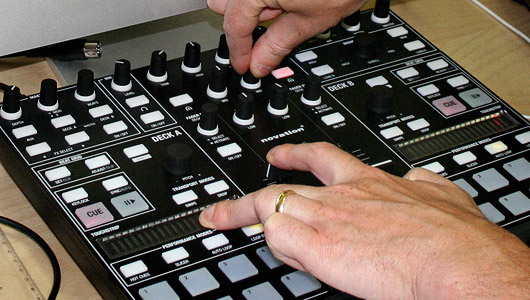 At the bottom section of each of the deck controls are a set of eight trigger pads governed by four performance modes which are hot cue, slicer, auto loop and loop roll. Hot cue enables up to eight cue points to be dropped as the playback commences – jumping back with the touch of each pad-  and you can use the touchstrip for fine tuning when the audio is paused. Slicer is where the fun really starts – this is a unique feature that has been bred from Novation’s Dicer. It works in one of two ways: firstly, if the Slicer button is pressed it continues audio playback but highlights in red an eight segment loop on the waveform with each of the performance pads illuminating (a bit like a 1970s fluorescent dancefloor) as the corresponding part of the loop is playing. You can then depress or manipulate the pads which will in turn loop its designated section of audio.

“With the touch of a button the decks’ individual effects are applied as gently or as heavy-handed as you like by means of moving the fader up and down. This is probably the most fun we’ve had with a DJ controller this year, and after the initial novelty had worn off we found it yielded some very usable results”

The length of this audio can be altered by pinching the touchstrip in much the same way as you would zoom in out on an iPhone screen. Hit the slicer button again and the current eight segment zone turns green and continues to loop on itself, allowing for more manipulation of the localized area. Autoloop is an equally cool feature whereby you can set up each pad to launch different length custom or default loops, adding ID3 tags as you go for instant recall. Loop roll allows the user to hit the pads, but the playhead will always return to the point it would have reached had the pads not been actioned. As with auto loop mode, the touchstrip can be used to select the range of loop duration assigned to pads. 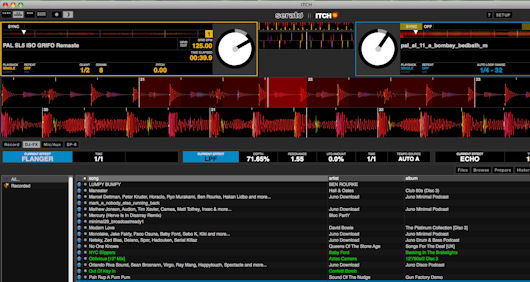 The 12 cm wide centre section houses the mixer, which incorporates a smooth action cross-fader (no curve adjustment settings) with two 7cm faders that flank a 15 LED bar graph meter that displays output volume and wet/dry effects status. Yep, that’s right, with the touch of a button the decks’ individual effects are applied as gently or as heavy-handed as you like by means of moving the fader up and down. This is probably the most fun we’ve had with a DJ controller this year, and after the initial novelty had worn off we found it yielded some very usable results. You’re also graced with a 3 band EQ (plus trim) which is set at an unspecified frequency and offers a 6dB cut and 12 dB boost. As far as connectivity is concerned, there are no schoolboy errors here with 1/4” TRS stereo jacks for master output and stereo RCAs taking care of the booth out with a split function level knob for both outputs.

The aux input is over stereo RCAs with independent level control and (drumroll) direct monitoring. The headphones attach either via RCA or TRS and the mic also has a TRS jack with it’s own gain control. Moving over to Traktor and once the .TSI file is loaded into the controller manager you’re free to get stuck into up to four decks with the touch strips, the overall layout being similar to Itch with the obvious differences being the exclusive features of each software system being represented on the controller. The overall workflow for the everyday functions are pretty much the same so you’re not locked into one system for life should you feel the need to switch.  Priced at £399 this for the moment a future proof unit that may well have kick-started the controller industry into a new burst of creativity. [Find out more at Juno]